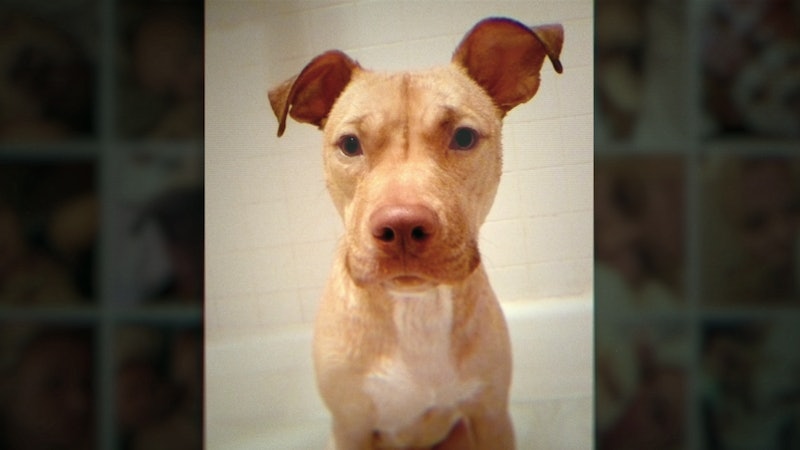 Sarma Melgnailis’ ex-husband Anthony Strangis may not have actually been able to make her dog Leon immortal, but after the events of Netflix’s Bad Vegan, her beloved pit bull is still very much alive and well. The now-12-year-old dog even his own Instagram (@oneluckyrescuedog) with nearly 8,000 followers as of publication. According to his bio, he currently lives in Harlem with Melgnailis, who adopted him from Brooklyn’s Sean Casey Animal Rescue in 2010. On March 18, Leon even “posted” about Bad Vegan, sharing a photo of himself on the Netflix home screen. “Mom says this is ‘bonkers.’ Also why am I on the tv? And who wants a pawtograph?” the caption read.

Melgnailis has had Leon since before she met Strangis, who she kept dating partially because Leon liked him so much. She had to leave him temporarily when she served four months at Rikers Island in 2017, following her and Strangis’ arrest on charges of theft and fraud in connection her her now-shuttered vegan restaurant Pure Food and Wine. Since then, Leon has remained by her side. Her own Instagram primarily features photos of him. “If you need me for the foreseeable future… will be hiding under covers spooning Leon watching videos of woodchucks,” she captioned a photo one day before Bad Vegan premiered. A few days later, she wrote that Leon still “loves you all, even if you called me a ‘defective arrogant sociopath,’” adding that they both felt “lucky and grateful” despite some negative feedback to the docuseries.

During a recent interview with Netflix’s Tudum, Melgnailis said that the Instagram photos of Leon reading are her favorites. She gets him to pose perfectly because, “He knows he’s going to get a cookie right afterwards,” she explained, joking that some of Leon’s followers have even said that she and him “look alike.” Among the pup’s favorite things to eat: raw sauerkraut, dark Latvian rye bread, coconut oil, and, of course, meat. “If I’m a bad vegan, Leon is a very bad vegan,” Melgnailis joked. “And just in case anyone’s wondering, no, I would not feed Leon pizza, Dominos or otherwise!”

In January 2019, Melgnailis re-published her original 2010 blog post announcing that she’d adopted Leon, noting that she’d “edited this version a bit and removed links and references to my company which are no longer relevant (#FML).” She first discovered and fell in love with the dog — named Quinn at the time — after seeing him featured in a Kris Carr newsletter. “To say I love him like crazy would be a substantial understatement,” she wrote in the post titled "The Most Insane Greatest Thing I’ve Ever Done,” explaining that Leon had been found lying in a Brooklyn street with severe mange.

The shelter’s trainer suggested she rename him, and she ultimately decided on the full name: Leon Quinn Trujillo Sterling Britt. On her website, Melgnailis wrote that Leon “is the character in my favorite movie of all time: The Professional, with Natalie Portman when she was young, and Jean Reno, who played the character Leon. I love him, I love that movie. I kept Quinn, his shelter name, for a middle name. Trujillo is for Rob Trujillo of Metallica. (sigh). Then Sterling and Britt were my boyfriend’s middle and last names, respectively.”

Now divorced from Strangis, Melgnailis is fully aware that Leon’s supposed “immortality is off the table,” though she still does what she can to improve his “longevity.” He recently had surgery for a hematoma, but is in good health otherwise.