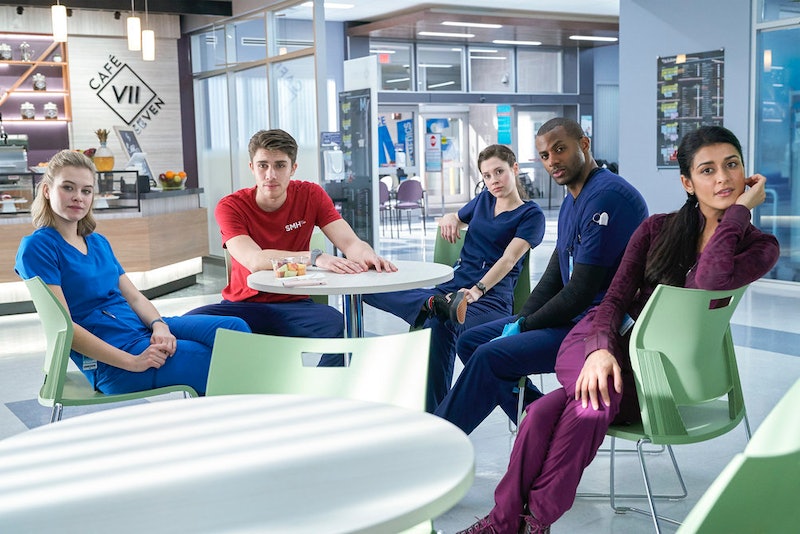 There's a new medical drama heading to NBC, and it sounds a lot like the Canadian Grey's Anatomy. Premiering on Dec. 7, Nurses — which originally aired on Canada's Global network — follows a group of nurses at Toronto's St. Mary's Hospital through hook-ups, high-stakes cases, and intern screw-ups.

According to Variety, the show is set and filmed in Toronto in Canada, giving the nursing staff plenty of patients to care for in the busy metropolitan area. There is a real facility called St. Mary's General Hospital in nearby Kitchener, Ontario, but the hospital on the show, like Grey's Anatomy's Grey Sloan Memorial, is fictional.

The drama feels real, though. In the premiere episode, the staff deals with the aftermath of a terrorist attack, during which a man drove a vehicle through a crowd of people, and you can expect similar cases throughout the season. Unlike the current season of Grey's, in which Meredith is on the verge of death due to coronavirus, Nurses doesn't deal with COVID, because it was filmed in April 2019.

In that way, the series feels like vintage Grey's. It's the five nurses' first day at St. Mary's and they're still learning the ropes while also dealing with life and death situations like Meredith, Cristina, George, Izzie, and Alex did during their intern year. There's also a tough, Miranda Bailey-like head RN and a brewing romance between nurse Grace Knight and a handsome doctor at the hospital that feels very Meredith and Derek: The Early Years. At the start of the episode, there's even a voiceover from Grace in which she uses medical metaphors to describe real life situations, like Meredith's own voiceovers did at the end of Grey's episodes.

So if you feel like the Grey's COVID storyline is hitting a little too close to home, you may want to check out Nurses. Just be prepared for some Canadian-accented "soh-rrys" when things go wrong.

More like this
'Grey's Anatomy's New Intern Got Advice From Dr. Bailey Herself
By Grace Wehniainen
Glenda Cleveland Died 2 Decades After Trying To Turn In Neighbor Jeffery Dahmer
By Brad Witter
'Reservation Dogs' Season 3 May Finally Mend Bear & Willie Jack’s Relationship
By Gretchen Smail
Caleb McLaughlin Details Racism From 'Stranger Things' Fans
By Radhika Menon
Get Even More From Bustle — Sign Up For The Newsletter