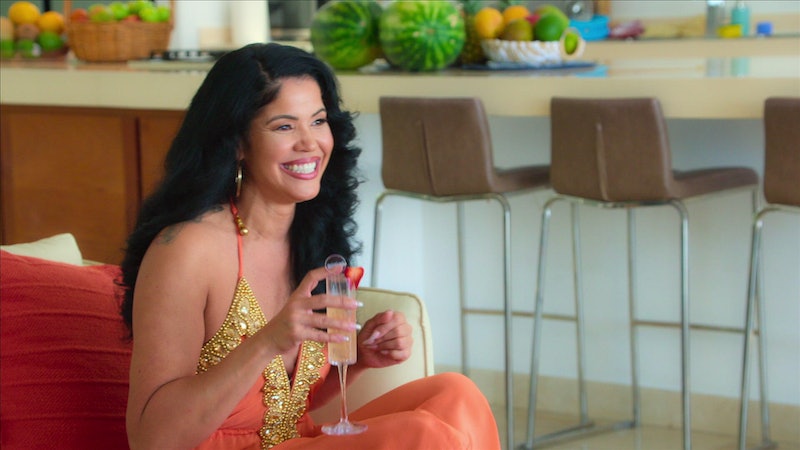 The premise of Hulu’s Back in the Groove is simple: Three single women in their 40s “rediscover their youth, live joyously, and hopefully find love” with men half their age at a Dominican Republic hotel. In the official description of the series, which draws inspiration from 1998’s How Stella Got Her Groove Back, the streamer calls out the saying, “You can’t fall in love with someone else until you fall in love with yourself!” So even though co-lead Steph Michaels, 42, struck up a romance with 29-year-old Leroy Mapp, her finale decision to leave the Groove Hotel alone was perfectly on brand.

Based on a poolside Instagram shot Steph posted from the Dominican Republic on May 11, it seems this is around the time filming was winding down. One of her next posts might have offered a major clue that she and Leroy didn’t stay apart for long though. On May 25, Steph, who splits her time between Miami and New York City, posted photos of herself taken around Philadelphia, which, as viewers may recall, is where Leroy lives. Her caption — “The Pursuit Of Happiness” — might have been more telling.

The “pursuit of happiness” phrase continued to appear in multiple subsequent Instagram captions in which she described feeling happy, inspired, and “EXTRA GRATEFUL for life, love and family.” As Steph explained in the caption of a June 25 post, “If it doesn’t bring me peace, make me happy or set my soul on fire, I no longer have the energy for it…” Fast-forward to July 3, right around Leroy’s birthday, and she was back in Philadelphia, all dressed up for what very well could have been a romantic celebratory date night. “The old version of you must die before a new you is born…. Im not new, Ive just improved…. When you feel like you’ve been buried…. GROW,” she captioned that post.

Though she and Leroy could have been trying to slyly avoid spoilers by posting a little more than a month apart, they did also both share very similar photos and videos taken at New York City’s SUMMIT One Vanderbilt observation deck. “Love is in the air,” Steph captioned her October 29 post after Leroy shared his Sept. 17 “life’s great” NYC photos.

On his own Instagram, Leroy celebrated his 29th birthday on July 2, reflecting on a year that “brought a lot of Joy, growth, and a bunch of new experiences” to his life. He also thanked God for “blessing” him with “ the ability to experience so much happiness and autonomy.” After Steph wished him a happy birthday in the comments, Leroy replied, “Thank you queen,” adding several emojis, including a black heart and flame.

Before Back in the Groove premiered, Steph, who is a breast cancer survivor, also reflected on her own “unbelievable” year. “It’s been filled with many lows, unbelievable highs, non stop laughs and one of the wildest rides I’ve ever been on!” she captioned the Nov. 4 post, announcing her casting in the Hulu series. “Just 5 months after having Breast Cancer and a Double Mastectomy, I decided to do something for myself that I’ve never done before! I checked into THE GROOVE HOTEL in the beautiful Dominican Republic to have some fun. Never in a million years could I ever imagine what I was in for… This entire experience has truly been life changing and I’m forever grateful for it all.”

Though it remains to be seen whether or not Steph and Leroy are in a relationship or just really great friends, all signs point to her having officially gotten her groove back.