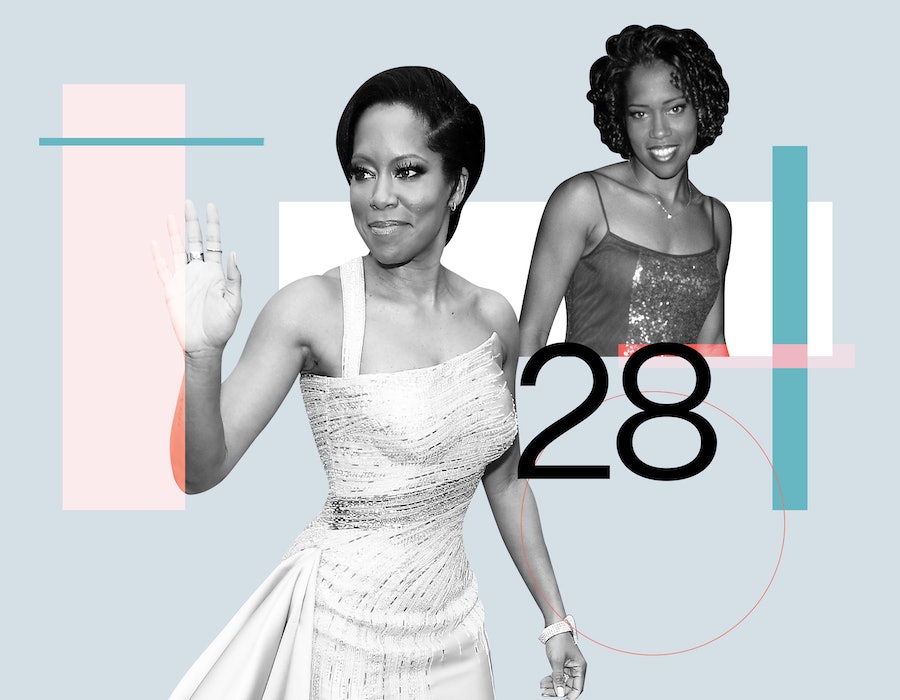 In Bustle’s Q&A series 28, successful women describe exactly what their lives looked like when they were 28 — what they wore, where they worked, what stressed them out most, and what, if anything, they would do differently. Here, Regina King talks One Night In Miami, her approach to activism, and motherhood.

Given Regina King's incredible decades-long acting career, you might be shocked to learn that she almost gave it all up to pursue a decidedly less glamorous profession: dentistry. "Teeth are a big deal to me!" she explains to Bustle. But the thought of attending dental school after graduating from the University of Southern California soon "went out the door" after she realized that acting could be more than just a hobby. "[Acting] is what I wanted to do, but it took me to go to college to know that."

Now, the 50-year-old actor is known for her Oscar-winning turn in If Beale Street Could Talk as well as using her platform to spark real change. Take the time she wore Breonna Taylor’s name on her T-shirt at the virtual 2020 Emmys, or her pledge to support gender parity in her productions by employing at least 50% women. "I started feeling the first level of a shift when I became a mother," she says of coming into her activism. "It wasn't based on social responsibility as much as maternal responsibility and how my choices would affect my son."

King's latest project is her directorial debut, and it's infused with the social commentary fans have come to love from the actor. One Night in Miami is a cinematic adaptation of Kemp Powers' 2013 play and a fictionalized account of a real evening Cassius Clay, who's best known as Muhammad Ali (Eli Goree), spent with Malcolm X (Kingsley Ben-Adir), Jim Brown (Aldis Hodge), and Sam Cooke (Leslie Odom Jr.). Through the film's dialogue-heavy scenes, King sought to emphasize each man's take on the best means to achieve racial equality and their individual responsibility in doing so. And while King admires all of their approaches, she considers her own activism style to be somewhere between X and Cooke's — part loud and proud activist, part Hollywood insider fighting to fix the system from within. "As I matured, I've made choices that are where Malcolm and Sam intersect," King says. "They both need to exist for the advancement of Black people."

Below, King reflects on Southland, being a young mother, and growing out a tricky haircut.

I had done almost three films back-to-back-to-back with some overlap. It was Stella, Enemy Of the State, and Mighty Joe Young. In that moment, I had a greater understanding for my ability as an actress because all three were quite different characters. I was able to bring those characters what needed to be brought to bring them to life. And at 28, I was in that in-between stage coming out of a short haircut.

How were you feeling about your life and career at the time?

Two years prior to that age, I had gotten to the point where I decided that if [the project] doesn't move me, I'm not auditioning. I'm not going to subject myself to being judged for something that doesn't inspire me in some way. I remember feeling, "I'm glad I made that call."

When did you actively get involved in finding work that inspired you instead of waiting until something came through?

At least 10 years ago I realized that I can use my art as my voice. 24 is actually the first thing that I did [that felt that way], and then I did Southland. I started seeing how powerful it is being part of storytelling that is holding a mirror up and reflecting social issues. From Southland on, almost everything that I've gravitated to as an actor definitely has been a voice speaking to systemic issues or being a marginalized person or how the justice system works in different ways for Black people than they do for white people.

My son [Ian Alexander, Jr.] was really young at that time, and he was still traveling with me wherever I would shoot. There used to be this commercial when I was a kid, and it was a perfume called Enjoli. The song she would sing in the commercial was, "I could bring home the bacon, fry it up in a pan." And then she falls over and [sings], "Never lets you forget you're a man." And they would go, "Cause I'm a woman!" I really didn't get it when I was a kid, but it was is a catchy tune. But around that time, I really remember having the thought, "I can do it."

How were you able to balance motherhood with your whirlwind career?

It wasn't easy. The marriage part was probably the hardest part of it all. And I think any married couple that's remained married, hats off to them because they were able to get over those times when you're growing at different speeds and in different directions and finding a way to bring it back and get back on the same path. That's difficult. My ex-husband and I found that we're much better co-parents and friends than we are as husband and wife.

I think I'm more patient, I think I'm more kind, I definitely listen more now. But I still don't really beat around the bush. Where something may come off as abrasive, I've always looked at it more as saving time. So I would tell her, "Keep that, but you can do a better job with your delivery and still save time." You can't control how someone receives something, but you can be more thoughtful in your delivery.

What would your 28-year-old self think of your career now?

More like this
At 28, Prue Leith Was In A Secret Affair & Sharing Apple Pie With Stoned Neighbors
By Grace Wehniainen
Elizabeth Debicki On Her Approach To The Most Debated Scene From 'The Crown'
By Grace Wehniainen
Michelle Williams Laughs Often About Motherhood Thanks To 'The Fabelmans'
By Marina Watts
'Wakanda Forever' Is Already Opening Doors For Mabel Cadena
By Grace Wehniainen
Get Even More From Bustle — Sign Up For The Newsletter