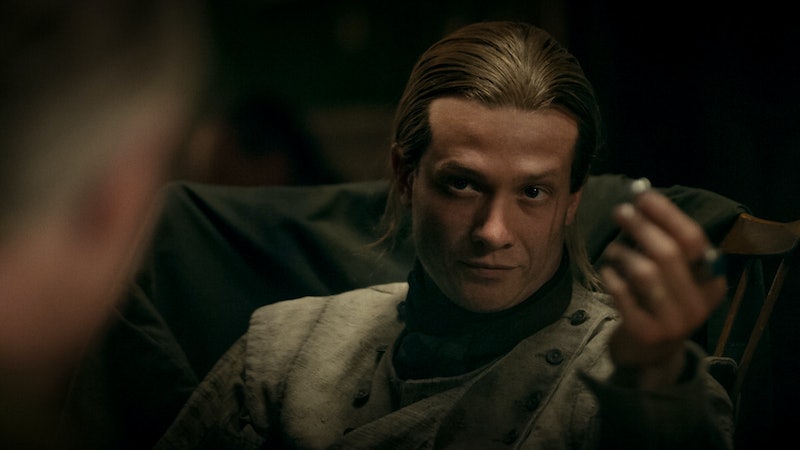 Spoilers ahead for Outlander Season 4, Episode 12. After spending Season 4 inflicting a lot of hurt on the main characters of Outlander, Stephen Bonnet has finally been sentenced to death. But it may not be the end of the road for him just yet: the final moments of the Jan. 20 episode leave it unclear if Stephen Bonnet is still alive.

There are a number of reasons to want Bonnet out of the picture on this show. He's repeatedly tormented Jamie and Claire, and he raped Brianna, who may now be pregnant with his child. Jamie, having seen Brianna struggle to cope with her trauma, writes her a letter saying that revenge won't help her heal, but forgiveness will. So, she decides to visit Bonnet in prison before he's hung. There, she tells him she'll raise their child to be a good person, and that the child will never know the truth about their father. By forgiving Bonnet — for her own sake, not for his — she's able to take the first step toward the freedom Jamie mentioned in his letter.

However, at the very same time that Brianna is at the prison, Fergus arrives with the regulators to free Murtagh, who is also being held there. In the flurry of activity, keys to his cell are dropped within Bonnet's reach. That means that when the prison is blown up, it's possible Bonnet is still inside, and thus now dead, but it's just as likely that he managed to get out before the explosion.

Book spoilers ahead. Season 4 of the show has already departed from the the fourth book in Diana Gabaldon's Outlander series, Drums of Autumn. But while some of the circumstances surrounding how he does so are different, Bonnet did escape from prison in Drums of Autumn. That means he encounters the Frasers again in future books — and quite possibly, future seasons.

In Drums of Autumn, Brianna knows that Bonnet escaped because she needed his help in saving Lord John from the explosion. In the book, Bonnet's accomplice was responsible for the explosion, rather than Fergus and the regulators, and Bonnet even invited Brianna to join him on his boat after the prison break. (She, of course, declined.) However, in the Starz interpretation of events, she seems unaware that Bonnet could have possibly gotten out. Considering that, after confronting Bonnet, Brianna seems at peace for the first time in weeks, it's rather heartbreaking to think she doesn't know her rapist is still alive and living freely.

When Bonnet almost undoubtedly returns, it will be a devastating blow. But hopefully Brianna's confrontation with him in the prison will make her more prepared to see him again. Because even though he's caused a lot of hurt to her and her family, Bonnet holds no power over her anymore.

This article was originally published on Jan. 25, 2019