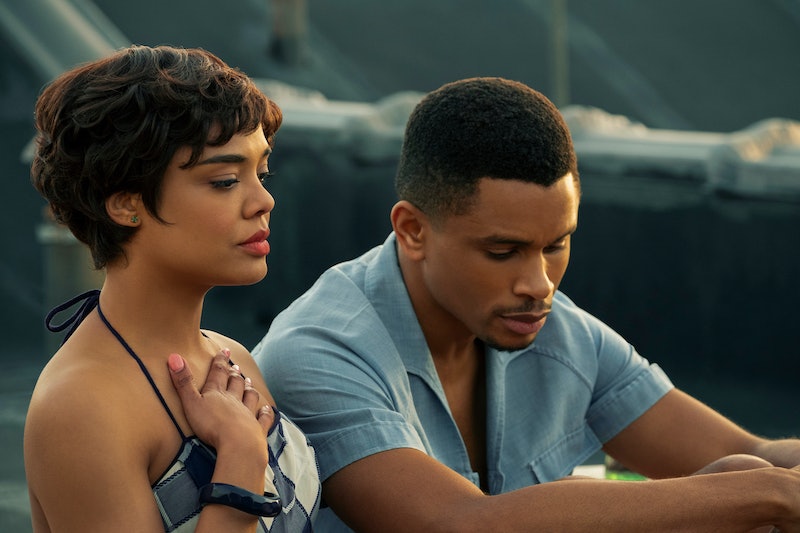 Amazon Prime's latest film is a love story for the ages. It's 1957 in Sylvie's Love, and "the jazz is smooth and the air is sultry in the hot New York summer," as the film's official synopsis reads. Robert (Nnamdi Asomugha), a saxophonist plays in a jazz quartet while Sylvie (Tessa Thompson) works at her father's record shop while dreaming of working in TV. When Robert takes a job at the record store as well, he and Sylvie begin a friendship that develops into a romance, even though Sylvie is awaiting her fiancés return from war. With the historical setting, and real-life jazz influences, you might be wondering, is Sylvie's Love based on a true story?

Sylvie's Love is inspired by the director and writer of the film's family. As Eugene Ashe explains in the movie's press notes, "The film is a passion project for me; inspired by old photographs of my family from the 1950s, and seeing the way they carried themselves with such dignity, I wanted to create a love story that showed the sacrifices and tribulations of true love."

Ashe also had a very specific goal when making this film, which was to tell a story of Black lives and love that didn't end in tragedy or feature conflicts from that time period. As he told ScreenRant, "Looking at old family photos told a very different story of Black life than we usually see depicted during this time. It's usually focused on the civil rights movement, and through our trauma and outside oppression that happens to us. I wanted to tell a more personal story and really kind of highlight and focus on our humanity. That's really what it's about. And what more of a human emotion is there than love?"

The film is also influenced by the very real world of jazz from the time period, with the film's composer Fabrice Lecomte saying in the press notes that Ashe's vision was quite specific: "Eugene said, 'The first thing we do is, since Robert is supposed to be the best up-and-coming tenor sax player of the early '60s, I want you to compose the music for his quartet. They have to be all original tunes that his quartet plays, and we're going to pretend like you're making a record the same way as they would make in 1962.' Which means great groups made of great players go into the studio, two takes max, and then get out. That's exactly what we did."

While Sylvie's Love may not be based on any specific true story, it's rooted in a desire to truthfully depict both the 1960s and the power of Black love.