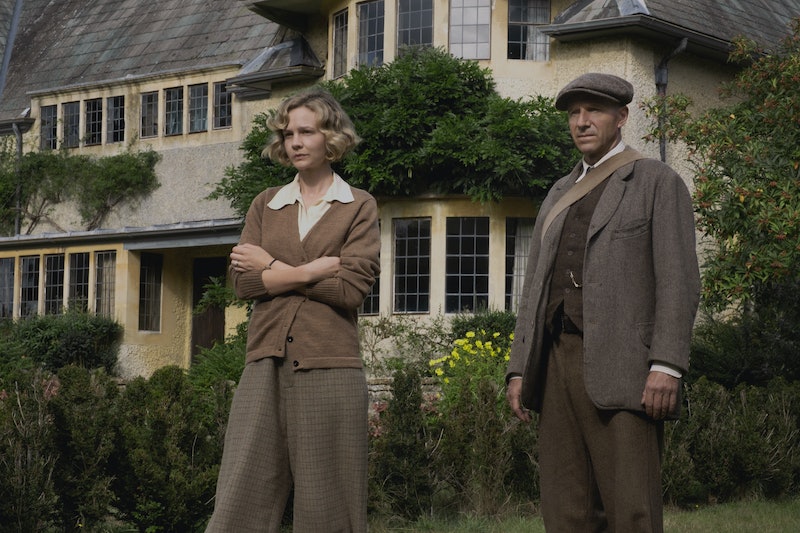 1400 years ago, Anglo-Saxons hauled an 82 ft. long wooden ship out of a nearby river into a field in Suffolk, on the east coast of England. Inside a chamber in the center of the ship, they placed weapons adorned with gems, gold jewelry, armor, and coins, and in the center of their treasures they lay the body of their king. Hundreds of years later, in 1939, two amateur archeologists would dig up a mound on a hunch and unearth what today is called the most "extraordinary archaeological discovery ever made in Britain." The new Netflix film The Dig recreates the true story behind the treasure hunt that would upend almost everything historians thought they knew of the Dark Ages.

The Dig stars Carey Mulligan as Edith Pretty, a wealthy widow who's raising her pre-teen son on a vast country estate. With World War II looming and the vast majority of England's professional archeologists tasked with protecting and preserving Britain's museums, she turns to Basil Brown (Ralph Fiennes), an amateur excavator to dig up the multiple mounds on her property. Though they think at first that they'd uproot something from the Viking era, in reality, Pretty and Brown found something much older, a burial ship from the 7th century, the Dark Ages of the Anglo-Saxons that would change much of what Britons knew about their own history.

Once the gravity of their discovery was relayed to the British Museum, a swarm of more experienced archeologists arrived on the scene. One of those archeologists was Peggy Piggot, whose nephew John Preston would later write about the discoveries at Sutton Hoo in his 2007 novel, The Dig.

"My Aunt Peggy found the first gold that was discovered in Sutton Hoo," Preston says in the film's press notes. "I didn’t know my aunt well and it was only after her death that I learned of her role in the excavation. The idea of writing a book about buried treasure for grownups really appealed to me." And with the book's cinematic adaptation out on Netflix, audiences will continue to be captivated by this Downton Abbey meets Indiana Jones story for years to come.