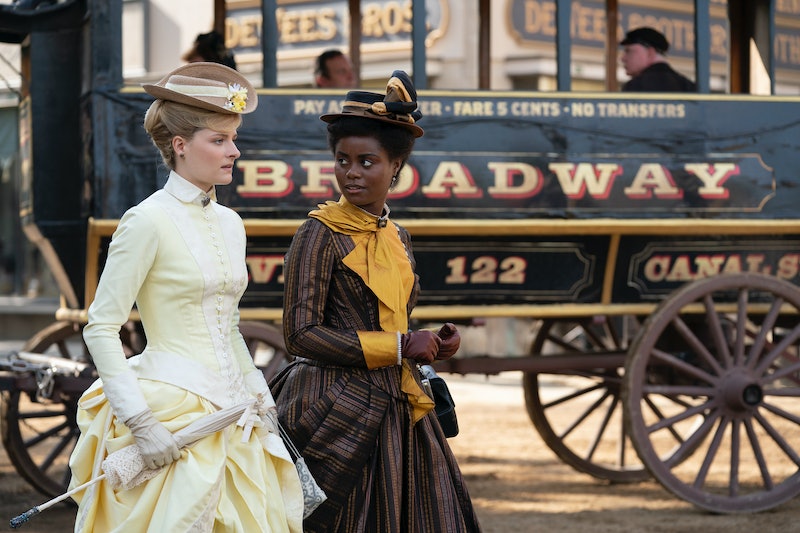 Written and created by Downton Abbey’s Julian Fellows, The Gilded Age gives fans of period dramas the opportunity to bask in the elegance of a late 19th century New York. Starring The Good Fight’s Christine Baranski, Sex and the City’s Cynthia Nixon, The Leftovers’ Carrie Coon, and Louisa Jacobson in her television debut, The Gilded Age has already become one of 2022’s most highly-anticipated series.

But as the nine-part series takes place in such a specific period of New York’s history, you’re probably wondering whether it’s based on a true story. While the setting may be historically accurate, the story is “largely” fictional according to Smithsonian Magazine. The set of characters are vehicles to showcase the lives of high society in this period of New York’s history which took place during “The Gilded Age”.

According to History, the term is used to describe “the tumultuous years between the Civil War and the turn of the twentieth century.” Much like the industrial revolution in England, the Gilded Age saw a rapid increase in industry and technology within a short span of time following the completion of the first transcontinental railroad in 1869, per the Library of Congress.

In the next decade alone, the first practical typewriter is invented, Alexander Bell receives a patent for the first telephone, and Thomas Edison demonstrates the first practical incandescent lightbulb. As America became more prosperous, a divide in wealth began to show separating the wealthy elite from the poorer working class.

As Popsugar notes, The Gilded Age follows a similar approach to Downton Abbey in demonstrating this wealth divide as well as the lavish lifestyles of the wealthy. In particular, The Gilded Age follows a young woman, Marian Brook (played by Jacobson) as she moves from rural Pennsylvania to New York City to live with her old money aunts Agnes van Rhijn (Baranski) and Ada Brook (Nixon).

The Gilded Age will be available to stream on Sky and NOW on January 25.