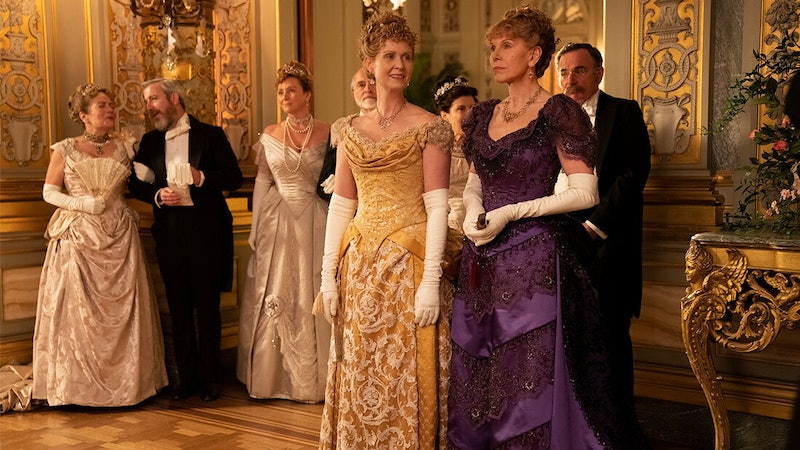 Lovers of Downton Abbey are being spoiled, with the release of the second film coming our way in March 2022 and now writer Julian Fellowes is back with another period drama to invest ourselves in. Set in New York in the late nineteenth century, The Gilded Age looks like the perfect fit for the period-drama-shaped hole in our viewing schedules.

The nine-part series was originally announced in 2016 with NBC but, in 2019, Fellowes announced a change of direction, as production moved to HBO. Keep reading to find out everything we know so far.

What Is The Plot Of The Gilded Age?

Viewers are thrust into 1882, where Marian Brooks (Louisa Jacobson) moves from rural Pennsylvania to New York with her estranged aunts, Agnes and Ada. She is joined by an aspiring writer, Peggy Scott (Denée Benton) and the two become fast friends on the train journey there. Set to the backdrop of immense economic change, the various characters that make up this community are plunged into a social revolution as old money clashes with new. The aunts face off with their rich railroad tycoon neighbours to scandalous results.

As described by HBO “In this exciting new world that is on the brink of the modern age, will Marian follow the established rules of society, or forge her own path?”

Is There A Trailer For The Gilded Age?

The teaser trailer has now been released, which you can see below.

Who Is In The Cast Of The Gilded Age?

The full star-studded cast list of this period drama has been released by HBO.

They’re joining a host of familiar faces, with Aunt Agnes being played by Christina Baranski (The Good Wife) and Carrie Coon (The Leftovers) and Morgan Spector (The Mist) playing the aunt’s neighbours, Bertha and George Russell, respectively.

When Is The Gilded Age Air Date?

Fortunately, there’s not long to wait, as the show will be aired on HBO Max on January 24, 2022, and on Sky and NOW TV the following day.

More like this
This Is When Netflix Is Going To Start Charging You For Sharing Passwords
By Darshita Goyal
Rita Ora Finally Opened Up About Marrying Taika Waititi & Their "Perfect" Wedding
By Sophie McEvoy and Catharina Cheung
Everything To Know About The 'Daisy Jones & The Six' TV Series
By Maxine Harrison and Brad Witter
'Succession' Season 4 Will Be An "Absolute Banger" According To Cousin Greg
By Bustle Staff
Get The Very Best Of Bustle/UK
Sign up for Bustle UK's twice-weekly newsletter, featuring the latest must-watch TV, moving personal stories, and expert advice on the hottest viral buys.