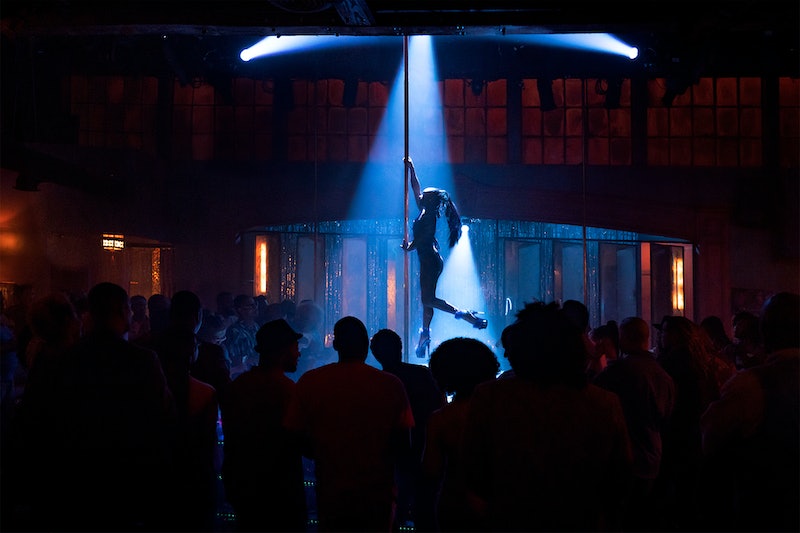 In Starz's P-Valley, The Pynk is as much of a character as the strippers who dance there. It's here, in the sprawl of Missippi's "Dirty Delta" sector, that the lives of headliner Mercedes, newcomer Autumn, and club owner Uncle Clifford intersect. And though The Pynk is not a real club, it does draw inspiration from real life. Series creator Katori Hall spent six years traveling to countless strip clubs while researching her 2015 play Pussy Valley, from which P-Valley is adapted.

Hall became interested in professional stripping after taking a pole fitness class and realizing that pole dancing was "hard as hell," she told The New York Times. She wanted to meet the women who'd perfected such a difficult yet disrespected art form, so she interviewed over 40 women throughout the American South about their experiences. It's out of this long journey that Hall created Pussy Valley — a sprawling narrative that she later realized was better suited for TV.

Since Hall got to know several dancers and the clubs they danced in, The Pynk likely doesn't represent any specific club, but an amalgamation of all the locations that Hall visited. According to The Atlanta Journal Constitution, P-Valley is set in Mississippi but is filmed in Atlanta, and there isn't a club named The Pynk in either state. The name seems to be unique to the show, which marks a change from the original script. When Starz announced P-Valley in 2016, P-Valley's club was called Pink Pony; there actually is a Pink Pony strip club in Atlanta, which filed for bankruptcy in 2018. (There's also a Pink Pony in Florida, which was raided in 2015 after it was discovered that teens were using illegal substances there.)

Most likely, Hall and her team changed Pink Pony to The Pynk in order to avoid any confusion, and also to keep the focus on Mercedes and the rest of the women working at the club. The Pynk is not meant to be a destination, but a space through which Hall tells strippers' stories honestly and asks viewers to question how they think about sex workers, who've historically been dehumanized and dismissed by society.

Strip clubs can be "extremely exploitative," Hall told Essence, and yet there also exists an "interesting tension between liberation and exploitation, because I have seen women who were able to pull themselves out of poverty or get out of bad relationships because they were able to have financial freedom in that space."

As James Poniewozik pointed out in The New York Times, viewers are meant to see The Pynk from the dancers' perspective, as a place that represents independence rather than titillation. Hall hired all women as directors for the project, and the camera "puts you on the stage, looking over [the dancers'] shoulders, taking in the faces of the watching clientele," Poniewozik wrote. "When it does view the dancers from the crowd, it’s not leering but admiring, as if appreciating a fellow artist’s technique. It sees them as whole, not as parts," and certainly not as eye candy.

More like this
'Happy Valley' Recreated This Moment From S1 In Its Penultimate Episode
By Sophie McEvoy
9 Time Catherine Cawood Was An Absolute Badass In Happy Valley
By Sophie McEvoy
This Dark 'Happy Valley' Theory Is Staring You Right In The Face
By Sophie McEvoy
ITV's 'Maternal' Was Inspired By A Very Simple – & Unanswerable – Question
By Maxine Harrison
Get Even More From Bustle — Sign Up For The Newsletter
From hair trends to relationship advice, our daily newsletter has everything you need to sound like a person who’s on TikTok, even if you aren’t.