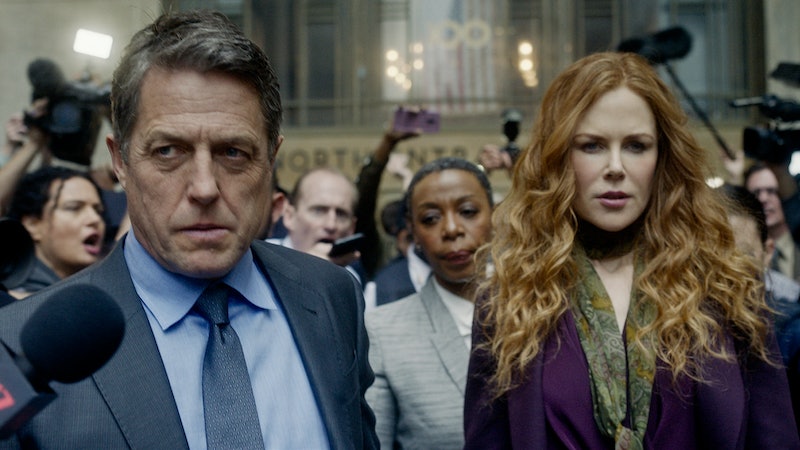 HBO's new six-part limited series The Undoing is Nicole Kidman and David E. Kelley's latest collaboration after the success of Big Little Lies. Also starring Hugh Grant, it's an adaptation of Jean Hanff Korelitz’s thriller novel You Should Have Known, which follows affluent couple Grace (Kidman) and Jonathan Fraser (Grant) as their seemingly perfect life comes unglued in the wake of a murder. While The Undoing is not based on a true story, it does explore pretty universal themes of marriage, betrayal, and the lies people tell themselves about their loved ones.

You Should Have Known centers on Grace, an Upper East Side therapist who educates her clients about how to notice their partners' shortcomings before the relationship implodes. Grace, meanwhile, believes she has "the right life, with the right husband, the right child, the right home, the right work." It's only when one of the few Latina mothers at her son's elite school is murdered and the police show up at her door that Grace realizes Jonathan isn't the perfect husband after all.

"I have a longstanding obsession with — to quote Senator Al Franken — lies and the lying liars who tell them," Korelitz explained to author Priscilla Gilman in a Q&A. "People who are unburdened by conscience are just fascinating to me. Most of us (not I) are sure that they can spot a psychopath, but psychopaths operate with general impunity, regardless. I wondered what it would be like to be completely ignorant of the true nature of someone you live with and think you know well. Then I thought: wouldn’t it be interesting if that ignorant person were someone whose profession it was to know human nature — like, for example, a therapist?"

It's these themes that attracted Kelley. “We gravitate to material that fascinates us,” he told journalists during the Television Critics Association press tour in January, per Deadline. “In this piece, the theme and core of denial that the characters lived in drew me in." He wanted to explore how delusions can have "a surprising tenacity for people," and that sometimes the "stories are better" than facing the truth.

Kelley collaborated with fellow executive producer and director Susanne Bier, who told the Hollywood Foreign Press Association that The Undoing only follows You Should Have Known for the first two episodes. "When David started writing from the book, he was very clear about the fact that he could use it as the start and then the story needed to go somewhere else," she said. The story ultimately diverges quite a bit from its source material, introducing the idea that it may not just be Jonathan who's lying about the case.