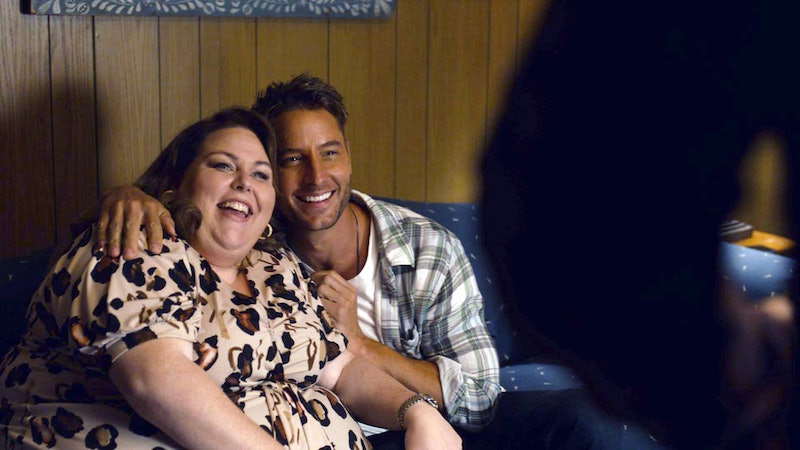 This Is Us finally returned last week...only to go on another hiatus. The show isn't airing in its usual Tuesday time slot on Nov. 3 in order to make room for NBC's Election Day coverage. But it made up for the wait with a two-part premiere that packed in a lot of drama.

As was revealed in the Oct. 27 episodes, Kevin and Madison are still expecting twins and are now kind of engaged; Rebecca is recovering from a memory loss episode after a reaction to a bad mix of meds; Toby and Kate are trying to adopt a child (which is presumably Hailey, the woman we've met in Baby Jack's flash-forwards); and Randall, who's still feeling estranged from his siblings after that blowup with Kevin and their overall lack of understanding for his identity as a Black man, has sought out a new Black therapist. *Breathes.* And that's just in the present day.

New flashbacks also revealed a ton, namely more about Randall's biological mother Laurel, who he *thinks* died of an overdose. The last few seconds of the premiere showed her gasping for air after being abandoned by EMTs, which means she could still be alive. And boy, do fans have some wild theories about where she is now.

"THE NEW THERAPIST IS GONNA BE RANDALS MOM or his half brother or something," one fan commented under an Instagram post asking for theories. Laurel was in immense pain after giving birth at home and, knowing she had a substance use issue, begged William for relief. "I FEEL LIKE RANDALLS MOM HAD ANOTHER BABY IN HER TUMMY WHICH CAUSED THE PAIN, SO BASICALLY RANDALL HAS A TWIN," another viewer theorized. One fan even connected Laurel to Randall's adoptive daughter, Deja. "Deja’s grandmother, (not the great-grandmother that died) is Randall’s mom. He and Deja’s mom are half-siblings, making Deja his niece."

Knowing This Is Us, it may be a while before the Laurel reveal is fully explained. But according to the promo for next week's episode, we can expect to learn more about Kate and Toby's adoption pursuit as well as Kevin and Madison's blossoming relationship. Now, we wait.

More like this
Taylor Swift Visited The 'Glee' Set For This Bizarre Season 5 Episode
By Grace Wehniainen
'The Last Of Us' Episode Schedule Competes With The Super Bowl & Oscars
By Brad Witter
The 'Gossip Girl' Reboot Creator Is “Looking For A New Home” To Air A Potential Season 3
By Brad Witter
Linda Ronstadt’s “Long Long Time” Plays A Pivotal Role In The Last Of Us
By Brad Witter
Get Even More From Bustle — Sign Up For The Newsletter
From hair trends to relationship advice, our daily newsletter has everything you need to sound like a person who’s on TikTok, even if you aren’t.