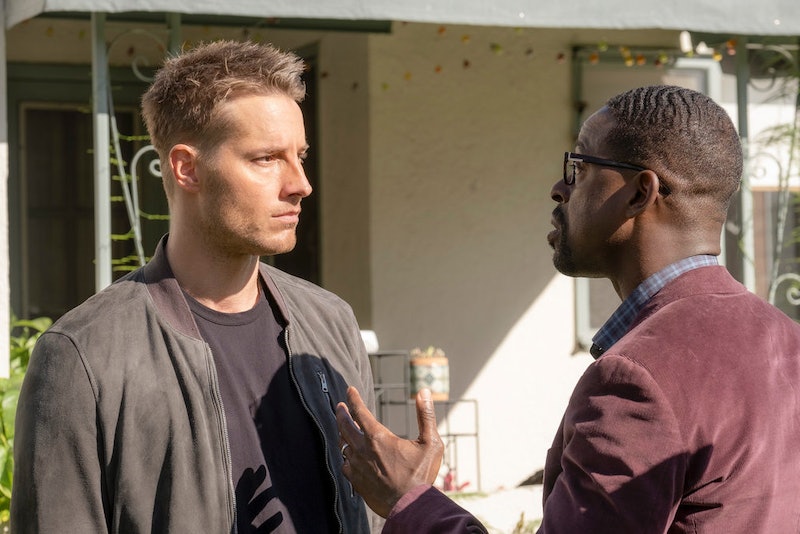 After eight long months, This Is Us is finally returning for Season 5 on Tuesday night. But considering it feels more like 80 months since the Pearson family was last onscreen, you might need a This Is Us Season 4 recap before diving back in. Here's where we left everyone before the world imploded.

Earlier in Season 4, Kevin had a one-night stand with Kate's friend Madison. And in the Season 4 finale, she revealed she's now pregnant with twins. It's unclear if that means Kevin is married to Madison in the flash-forwards we've seen of him, which confirm he has a wife and kids in the future. But he did commit to co-parenting with Madison regardless of where their relationship leads them.

He also had a huge falling out with Randall after multiple arguments about whether or not their mom should move to St. Louis to participate in a clinical trial for her early onset dementia. Kevin was against it and at one point convinced Rebecca not to take part, but Randall went behind his back to change her mind. The Season 4 finale ended in a giant blowout between the brothers in which Kevin blamed Randall for their dad's death and said the day Randall was adopted was the worst day of his life. Randall called Kevin selfish and told him that he'll never find love.

On top of his crumbling relationship with Kevin and constant agony over his mom's health, Randall dealt with the stress of being a Philadelphia councilman, husband, and father of three. After some urging from Beth, he began attending therapy for his anxiety, which escalated after their home was invaded early in Season 4.

In the Season 4 finale, Kate and Toby celebrated the birthday of their son Jack (who we've seen as a married musician in multiple flash-forwards). In honor of the occasion, the couple visited the NICU where Jack was born, where they talked about the possibility of giving Jack a sibling. Kate admitted that the odds are stacked against them: she can't handle a second pregnancy, their marriage is under stress, and money is tight. But "the Pearsons have a good adoption record," Toby noted.

Cut to Jack's latest flash-forward, in which he and his wife welcome a baby daughter, Hope. He calls a mysterious new character named Hailey to give her the news, and she leaves an art gallery where she presumably works to get to the hospital and meet her new niece. She is assumedly Jack's sister, which suggests Toby and Kate followed through with an adoption.

At baby Jack's birthday party, Rebecca and Miguel announced their intention to move to St. Louis, where they'll live for nine months while Rebecca receives treatment. However, in a flash-forward, Kevin, his mystery fiancée, and Kate join Rebecca at the family cabin to celebrate their 40th birthday (no Randall in sight). Does this mean the trial didn't work, or did Rebecca forgo it after all?

“It’s going to be, obviously, a challenging chapter for Rebecca moving forward,” This Is Us creator Dan Fogelman told The Wrap in March. “We have a big storyline planned for Mandy next season in present day as an older woman and also her whole past timelines.”

Elsewhere in Season 4, Jack's estranged brother Nicky grew closer to his niece and nephews, and In particular Kevin. The finale flash-forward revealed that he later gets married, but we don't know to whom.

Expect these cliffhangers to be front and center when This Is Us returns on Oct. 27.

More like this
'Heartstopper' S2 Just Welcomed Four Brand New Cast Members
By Nola Ojomu and Sam Ramsden
The ‘You’ Season 4 First Look Shows Joe’s New Identity And Potential Victims
By Bustle Editors
Nicola Coughlan Shared A Lady Whistledown Excerpt From ‘Bridgerton’ Season 3
By Grace Wehniainen, Alyssa Lapid and Sam Ramsden
'The White Lotus' Season 2 Finally Has A Release Date
By Bustle Editors
Get Even More From Bustle — Sign Up For The Newsletter