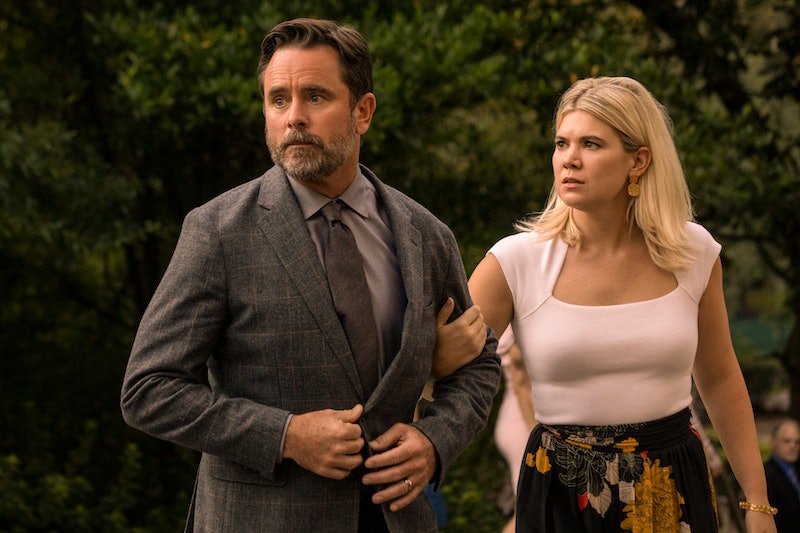 Spoilers ahead for Outer Banks Season 2. As a Kook with deep pockets, Ward Cameron has always been a formidable opponent for John B and the Pogues. He flew the gold to the Bahamas as soon as John B and Sarah found it. When Sheriff Peterkin tried to arrest Ward, Rafe shot her and Ward covered it up. And when Gavin the pilot threatened to tell authorities the truth, Ward killed him. Even when Sarah said she’d testify against Ward, he claimed everything would work out in the end. To him, there was no problem money and power couldn’t fix.

For a while, this appeared to be true, with several cops like Deputy Victor Shoupe under Ward’s control. But when Shoupe revealed that he was actually working with North Carolina’s State Bureau of Investigation (SBI) to take Ward down, Ward appeared to be out of options. With the evidence of Rafe’s finger prints on the shell casings and gun that shot Peterkin, SBI raided the Camerons’ home. Rafe was captured, and it seemed like Ward would finally get his comeuppance.

Instead, he found a way to avoid consequences once again. Ward made a confessional video saying that he’d hated growing up as a Pogue and was willing to do anything to keep the lavish Kook lifestyle. He admitted that he killed Big John and Gavin, but also lied and said he killed Peterkin. (This frees Rafe — who, let’s remember, pulled a knife on his stepmom and nearly killed his sister several times — from jail.) Then he put on a white suit and went to stand on his boat, The Druthers. With Shoupe, Sarah, and the rest of the Pogues watching from the dock, Ward blew up the boat, killing himself.

At least, that’s what appeared to happen. It’s not until Rose Cameron kidnaps Sarah and throws her on an international cargo ship that she finds out the truth: Ward is alive, and her family all faked his death. “It was the only way to make sure that we were all safe and we were all together,” Ward tells Sarah. He used scuba gear to swim away and wanted to tell her he was alive, but had to make sure Rafe got away first. “That’s psychopathic,” Sarah replies.

Unsurprisingly, the first thing Ward does once Sarah discovers he’s alive is lie and claim that John B walked away once he gave him the gold cross. Sarah, of course, discovers that’s not the case, and chaos ensues when John B and the rest of Pogues who snuck on board the ship fight back. Sarah manages to escape from Ward, but he confronts her on the deck. “I finally understand what everyone was trying to tell me,” Ward says. “You’re not one of us. Not anymore. And you never will be.”

Ward says he can’t let Sarah go because she knows too much, and begins to choke her out before John B interferes. In the ensuing brawl, John B strikes Ward so that he falls and hits the back of his head on the side of the boat, just as Ward did to Big John. “Is this how you killed my father?” John B demands as Ward’s head starts to bleed. Sarah and John B leave Ward for dead and then escape to an island with the rest of the Pogues.

Somehow, Ward survives his injuries. Worse, the Pogues realize he has not only the Royal Merchant gold but also the Santo Domingo cross, meaning the Camerons have plenty of money at their disposal to come after them.

In the end, Ward’s actions reveal that he never cared about his family as much as he claimed to. He’s proven over and over that he’s disgusted by working class people, despite having grown up in The Cut himself. Now wealthy, Ward cares more about the power of being a Kook than anything else. He always seemed to favor Sarah, but turned on her as soon as she rejected the Kook lifestyle. He has no empathy for anyone beyond himself or those who serve his interests.

In the final moments of Season 2, Rafe promises Ward that they’ll find Sarah. At the start of the season, it seemed like Ward would never have picked his son over his daughter. But now it seems like he’ll stop at nothing to take Sarah down.