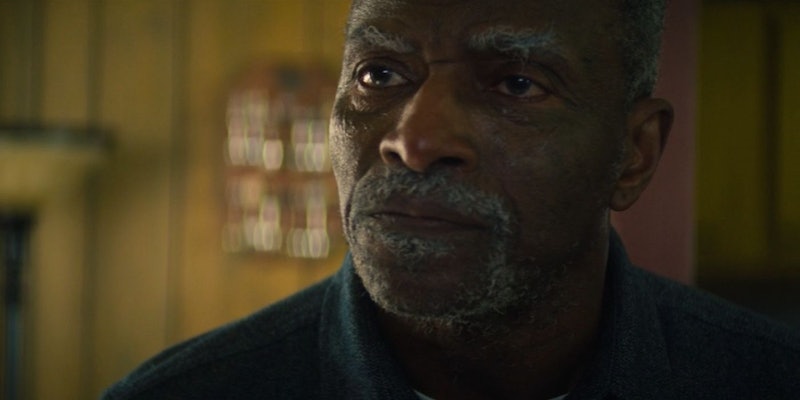 With Baron Zemo and a Super-Serumed John Walker on the loose, it’s time for Sam Wilson to decide if he’ll become Captain America in The Falcon and The Winter Soldier. One character who may prove to be the lynchpin in the final episodes is Carl Lumbly’s Isaiah Bradley, who was introduced in Episode 2 as the original Black Super Soldier.

For those familiar with the comics, Isaiah Bradley is a hero from one of Marvel’s most subversive stories to date, Robert Morales and Kyle Baker’s 2003 limited series Truth: Red, White & Black. It’s a comic that showrunner Malcolm Spellman has repeatedly encouraged fans to read while watching the show, as it questions not only the legacy of Captain America but of America as a whole. The comic was inspired by the real-life Tuskegee Study, which lasted from 1932 to 1972 and involved the U.S. government lying to and experimenting on Black men to find a cure for syphilis.

In the comic, Isaiah Bradley is introduced as a conscientious objector who is forced to participate in World War II in an all-Black regiment. One day, he and 300 Black soldiers are kidnapped by military intelligence so the U.S. Army can conduct experiments on them. The goal is to perfect the Super Soldier Serum that they will eventually give to Steve Rogers, the first Captain America.

Alongside soldiers Maurice Canfield and Sgt. Lucas Evans, Isaiah is treated as subhuman by the white superior officers. As the experiments proceed, the men are stripped of their personalities, and even their unique physical features. They’re forced to watch their fellow soldiers die during the experiments, and are never thanked for the dangerous missions they’re sent out on. (Steve Rogers, of course, was always welcomed back with fanfare after his exploits). When Isaiah realizes he’s the last Super Soldier left alive to send on a mission, he becomes angry and eventually steals a Captain America uniform to wear on a single mission, since he’s literally doing the exact same work. This infuriates the white officers, and Isaiah is court-martialed and imprisoned at Leavenworth, where he serves 17 years in solitary confinement. While he’s later freed by President Eisenhower, the serum and imprisonment have negative repercussions, and he’s never the same again.

In The Falcon and The Winter Soldier, Isaiah’s story is slightly different. Bucky encounters Isaiah during the Korean War in the 1950s, and we learn that afterward, Isaiah was jailed for 30 years for murky reasons. It’s not as critical of America as the original comic, but producer Nate Moore explained on Vanity Fair’s Still Watching podcast that Isaiah is still an integral character to the series. He said that in the comics, Isaiah had “all the agency taken out of him” by the end of the story, but Spellman gives him a real voice in the show. He’s able to “really weigh [in] on the things I think are subconscious in Sam’s character,” he explained. “I think that’s such an important character, and more to come, but I think that’s why the Isaiah Bradley inclusion was so great.”

Spellman seemed to hint we could even delve more into Isaiah’s tragic story in Episode 5. “Hands down, [Episode] 5, it just gets real,” he told Comicbook.com. “You’re going to cry.”

While Inverse suggested that Spellman’s quote could mean that either Baron Zemo or John Walker are going to kill Isaiah, it’s also possible that the episode will simply be an emotional arc for Isaiah, or Sam, or both. Maybe this is when Sam finally comes to a decision about wearing the shield. Will he honor Isaiah’s legacy by donning the Captain America outfit that was once denied to Isaiah simply for being Black? Or will he do away with the shield entirely and craft a new identity with Isaiah’s encouragement?

There’s also the possibility that Isaiah’s story will continue through Elijah Richardson’s Eli Bradley, Isaiah’s grandson who initially answered the door in Episode 2. In Young Avengers No. 1, Eli becomes the young superhero Patriot, who inherited super powers from Isaiah. (It gets more complicated in later issues, but that’s for another day). He eventually becomes the leader of his squad and is known for his clever strategies.

Regardless of what happens, it’s clear that Isaiah’s heartbreaking story adds new dimensions to both the legacy of Captain America and of America. While it certainly takes some shine off the shield, it also leaves viewers with an important question: who are we as Americans if we don’t reckon with the past?

More like this
'The Last Of Us' Video Game Revealed Tess’ Fate In The HBO Series
By Brad Witter
The Song At The End Of 'The Last Of Us' Ep 1 Has A Deeper Meaning
By Sophie McEvoy
Wait, Is Barney Stinson Related To Sophie On 'HIMYF'?
By Gretchen Smail
Netflix Shut Down 'Bridgerton' S3 Rumours About A “Very Dark” Storyline
By Bustle
Get Even More From Bustle — Sign Up For The Newsletter
From hair trends to relationship advice, our daily newsletter has everything you need to sound like a person who’s on TikTok, even if you aren’t.