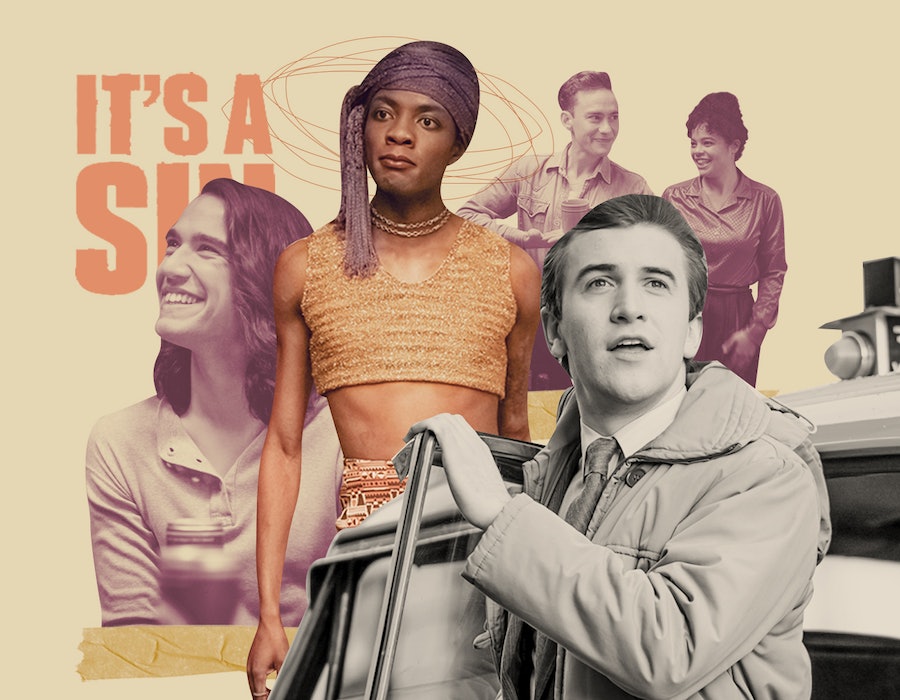 Like many others in the 1980s, Russell T Davies witnessed the devastation of the HIV and AIDS epidemic in Britain. It wouldn't be until 40 years later that the screenwriter – known for Years and Years, Queer as Folk, and Cucumber – felt ready to tell that story, though. Now, it is here, in the form of Channel 4's It's A Sin, a five-part drama charting the ups and downs of a group of friends, living out their youth in the shadow of a deadly new virus.

The show begins with Ritchie Tozer (played by Olly Alexander, one-third of British synth-pop trio Years & Years) leaving the Isle of Wight behind in favour of London's bright lights. Ritchie’s crew and "Pink Palace" flatmates include well-mannered Welsh boy Colin (Callum Scott Howells), unapologetic party boy Roscoe (Omari Douglas), the reliable and sensitive Ash (Nathaniel Curtis), and Lydia West’s Jill, who basically takes care of everyone and everything. Set to the tune of the Pet Shop Boys, Kate Bush, and Queen, the show is as thrilling as it is devastating. When you aren't crying over the distant memory of dancing the night away, the heavy grief the show depicts will grip your soul. That said, it isn't a show about death – though it invariably includes much of that – it is about life; the chaotic, bright, and brilliant lives of a beautiful friendship circle.

I (virtually) sat down with Douglas, Scott Howells, Curtis, and West to discuss the mood on-set, their hopes and aims for It's a Sin, and the importance of friendship in a pandemic.

Why do you believe the story of It’s A Sin is an important one to tell?

Omari Douglas: It’s really important for us to look at history and I guess, to a degree, history repeating itself. Coronavirus obviously doesn’t have the same sort of prejudice and fear surrounding it that the HIV and AIDS epidemic did, but I think that it is really important we look at how history has treated certain things and marginalised people. It’s important to reflect and learn, because I’m still learning from it as well, you know?

It’s a Sin is a domestic drama, but do you think it will help educate viewers on the history of what happened during the HIV and AIDS crisis of the 1980s?

Nathaniel Curtis: I think it absolutely will. As someone who was barely taught about it in school, I think that It’s a Sin will not only help educate people on what happened, but how it happened, and how people actually felt about it. It’s a drama, but it isn't fiction; it’s built from Russell’s own experiences. It’s not just telling statistics or saying "this is what happened on this day"; you learn with – and through – the characters.

The weight of responsibility – portraying the very real experience of those who lived through the HIV and AIDS epidemic – must have been huge.

Callum Scott Howells: Absolutely. We felt it every single day. We’d go into work and we’d have these people in our heads. You have to. It’s such a sensitive, real topic. It’s not like Contagion, like a fictional thing; this is a real virus that ripped through humanity and still does to this day.

Pandemics are much closer to home now than they were in 2019, too.

OD: We did fear that people might watch the show and think that it was a purposeful placement – a show about a pandemic airing amid another – but we finished filming way before coronavirus even hit. It was just a really fateful sort of thing.

Lydia West: I believe people will be able to relate to the show and draw parallels, but I find it really hard to pick out similarities. Yes, both are pandemics, but in terms of the way they were handled, the government’s response, the way the media portrayed it... I don’t think you can even compare them. Even to this day, the way HIV and AIDS are stigmatised is disgusting.

Do you think telling the story from the perspective of the people caught up in the crisis sets It's a Sin apart from other depictions of the AIDS epidemic? Other films and shows in this canon tend to focus on activists, for example.

NC: I do. I think that seeing through the eyes of "normal" people – people you would run into every day, who didn't know what was happening and who were just trying to live their lives – makes it not only more personal, but it also makes it more heartbreaking. I do like stories about people fighting for those who were affected though.

It is deeply heartbreaking, but your characters also have a lot of fun. What was the mood like on set?

LW: We had such a great time getting to know each other. It was so easy, for my character, in particular, just to love these boys because they’re all so gorgeous in real life and so kind and sweet. I feel like the casting team cast such an amazing group of people because it’s such a sensitive story to tell — and I believe very sensitive actors were cast and that made it really easy for us to all connect, and be vulnerable, and to open up.

OD: There were sometimes when all six of us weren’t together, but even then we’d always make sure we’d go for a Sunday roast together. That was sort of like a diary set thing.

What about working with Russell T Davies, and Stephen Fry! What was that like?

NC: Russell's just an absolute dream. He’s such a nice man; so lovely, so caring. And he’s a genius. There’s no other way to say it.

OD: Stephen was amazing too. We went for a cup of tea the day before we started shooting and he had all these amazing stories. The first scene that I shot with him was where Roscoe goes and finds him in a black tie event, and there’s like a very pointed stage direction in the script that says that he goes up to him and whispers something really dirty in his ear. Our director, Peter, said to me the day before: “I’m really genuinely gonna need you to have some sort of ammo to give to Stephen when you’re doing that, even though we’re not gonna hear it.” I was like “alright, ok, I’ll do as you say.” So I just did, and that was really the ice breaker of all ice breakers, really.

What did you say?

Fair enough. Tell me about lockdown: how have you coped and what's helped you cope?

OD: Each other. We’ve all kind of been leaning on each other through this.

NC: I agree. Knowing that we’re not alone, knowing that we can talk to each other about anything – any concerns, any good news, anything like that – we are there for each other, and actually, I think that’s really important. Especially at a time like this.

More like this
'Consent' Is Not Just One Person’s Story, But Hundreds
By Shahed Ezaydi
Wait, Is 'Happy Valley' Not Actually Over?
By Darshita Goyal
'Happy Valley's Ending Was *Almost* Entirely Different
By El Hunt
6 'Happy Valley' Easter Eggs You May Have Missed
By Sophie McEvoy
Get The Very Best Of Bustle/UK
Sign up for Bustle UK's twice-weekly newsletter, featuring the latest must-watch TV, moving personal stories, and expert advice on the hottest viral buys.