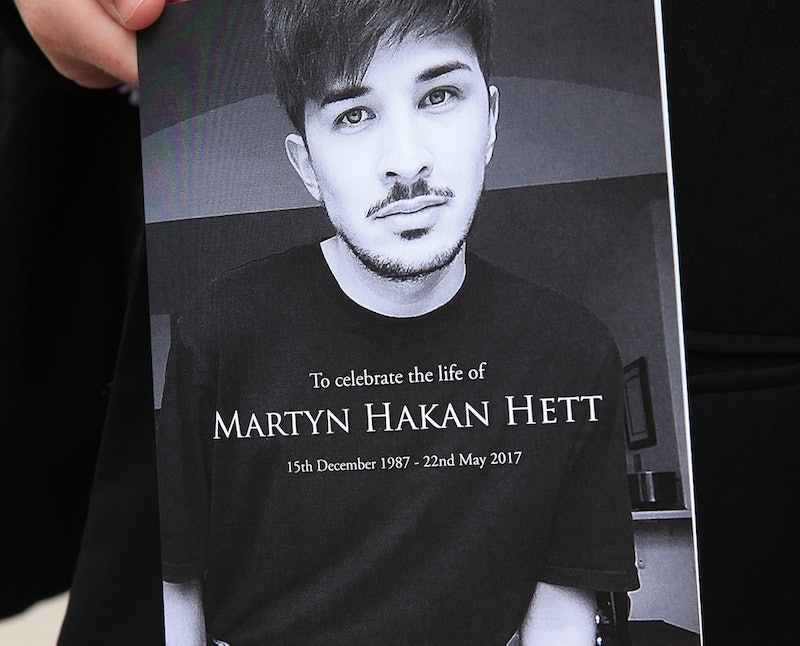 Five years ago, 22 people were killed after attending an Ariana Grande concert in the Manchester Arena terrorist attack. A new two-part ITV documentary Worlds Collide: The Manchester Bombing examines the lives of those affected by the attack, with the first episode focusing on 29-year-old victim Martyn Hett who grew up 10 miles away from the attacker Salman Abedi. Sharing their fondest memories of Hett, his family feature prominently in the episode. But where is Martyn Hett’s family now?

A PR account manager from Stockport, Hett was known for his love of Coronation Street. A self-described “superfan” of the soap, Hett grew quite the following on social media after appearing on E4’s Tattoo Fixers to replace a small Deirdre Barlow tattoo on his ankle with a life-like portrait of the character.

Like many other families, Hett’s parents were involved in the 2020 inquiry into the attacks. He was the first to be remembered in a “pen portrait”, an insight into the lives of the 22 victims presented by their families. Describing Hett’s life as “so vibrant, so full of energy”, his father told the inquiry about the bright future he had ahead of him. “He’d just been promoted at work and was ready to go on the holiday of a lifetime,” he said. “This was cruel beyond belief.”

Three days before his death, the family held a leaving party for his eight-week trip to the United States. “We gave him a big hug and said goodbye … having no way of knowing we would never see him again.

Hett’s step-father Stuart Murray echoed these sentiments on an episode of Tattoo Fixers, where he followed in his stepson’s footsteps by getting a tattoo of him dressed up as Deirdre on his leg. “[He’d] be laughing his head off and just think it’s so wonderful that I’m here,” Murray said.

Described by his mum Figen Murray as having an “incredible passion for life”, she told ITV news how his loss has left “an absolutely gaping hole in my soul”. She continued: “They say time is a good healer. I don’t think that is true. Three years on and I miss him every day.”

Since her son’s death, Murray has been campaigning for Martyn’s Law – a piece of legislation that would require public venues like arenas, theatres, and stadiums to have counter-terrorism plans in place. As a commitment to her pledge to help others, Murray now has a master’s degree in counter terrorism.

More like this
A New Netflix Doc Will Explore The Unsolved Murder Of Jill Dando
By Sam Ramsden
This First Look At 'The Gold' Shows Jack Lowden In A Whole New Light
By El Hunt and Sam Ramsden
Theo James Would “Love” To Star In George Michael Biopic
By Sam Ramsden
Siva Kaneswaran's Net Worth Shows The Value In Chasing The Sun
By Bustle UK
Get The Very Best Of Bustle/UK
Sign up for Bustle UK's twice-weekly newsletter, featuring the latest must-watch TV, moving personal stories, and expert advice on the hottest viral buys.