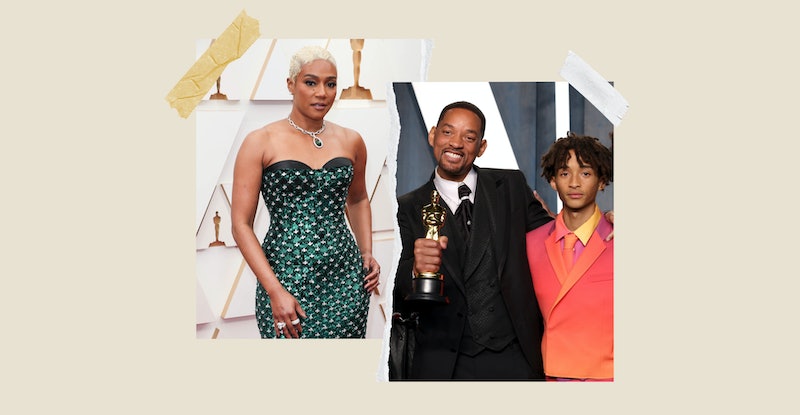 As the fallout of Will Smith physical altercation with Chris Rock at the Oscars continues to unfold, many are eagerly awaiting further comment from the Smith family. While Will and Jada have yet to say anything following publicly, their youngest son Jaden shared his reaction on social media.

A while after the broadcast ended, Jaden Smith tweeted “And That’s How We Do It” in reaction to the drama. He also posted a (now deleted) selfie in the back of a limo with the caption: “My Dads Speech Made Me Cry”. Jaden, Willow, and Trey Smith joined their parents at the Vanity Fair Oscar Party, with Willow sharing a few behind-the-scenes snaps on her Instagram Stories including a picture with her dad holding the Oscar for Best Actor, as well as a couple photos of Jaden and Jada.

While there’s currently no further comment from Will Smith, who won the Oscar for Best Actor for his performance in King Richard, the Academy issued a statement saying that it “does not condone violence of any form.” The actor did reference his actions as he accepted the award, though.

Will Smith took to the stage moments after Rock made a joke at the expense of Jada Pinkett Smith, calling her “G.I Jane” in reference to her shaved head. Pinkett Smith has openly discussed her experience with hair loss after being diagnosed with alopecia in 2018. “I was in the shower one day and just had handfuls of hair in my hands and I was just like, ‘Oh my God, am I going bald?’,” she said on her Red Table Talk series. “It was one of those times in my life where I was literally shaking with fear. That’s why I cut my hair, and why I continue to cut it.”

Opinions continue to be divided over what happened, but comedian-actor Tiffany Haddish said Smith’s defence of Pinkett Smith was the “most beautiful thing I’ve seen.” Speaking to People at the Governors Ball after the ceremony, Haddish said that seeing “a Black man stand up for his wife – that meant so much to me.”

“As a woman, who has been unprotected, for someone to say, ‘Keep my wife’s name out your mouth, leave my wife alone,’ that’s what your husband is supposed to do, right? Protect you,” she said. “And that meant the world to me.”

Haddish continued: “Maybe the world might not like how it went down, but for me, it was the most beautiful thing I’ve ever seen because it made me believe that there are still men out there that love and care about their women, their wives.”