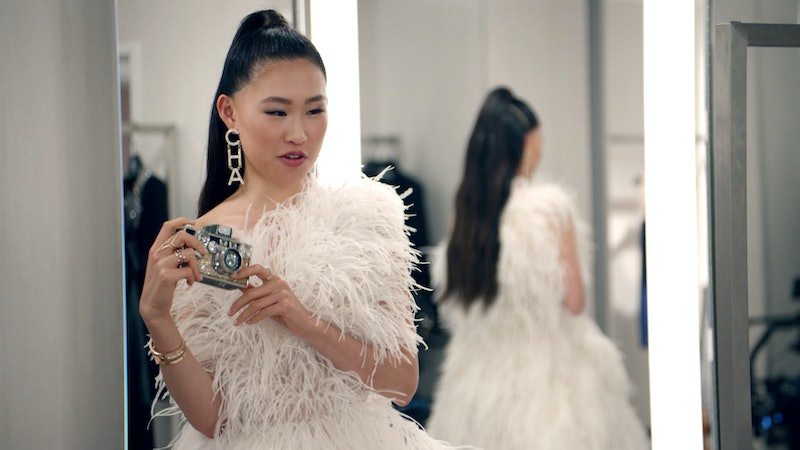 Even among a couture-wearing cast, Jaime Xie has already been lauded by Vogue as the "most fashionable" star of Netflix's new reality show Bling Empire. It's a title that should mean a lot to the style-obsessed Xie, who has been a Fashion Week fixture for years. "Some people think Fashion Week is too hectic, but I find it exhilarating. I love the craziness, the commotion, the fact that there is always something happening," she told the magazine.

There's a lot happening for Jaime right now, too. Get to know more about her as she adds reality star to her growing résumé.

The Bling Empire star is introduced in the first episode as a friend of Kane Lim's. She's someone just as well-off as him — both their fathers are billionaires. According to Vogue, Jaime's dad is Ken Xie, who made his money in the cybersecurity technology sector helping implement firewalls and VPNs. Jaime grew up in Silicon Valley, where she competitively rode horses until she dropped out of college and decided to pursue a career in fashion.

Right now it seems like Jaime makes most of her money from her social presence. She has over 260,000 Instagram followers and 57,000 subscribers on her YouTube channel, where she shares luxury clothing unboxings. Her website features a dedicated "shop" page featuring affiliate links to purchase her wardrobe items, though she's hoping to one day expand into designing her own pieces, telling Vogue that she would be interested in a sunglasses line and Prestige that she's also thinking about creating a luxury shoe brand. At 22, she's got some time to figure out her next foray into fashion.

Jaime Xie's Instagram Is Just As Fashionable As You'd Expect

The reality star uses her Instagram to show off her unique fashion sense, sharing photos of herself dressed in outfits like a futuristic silver suit and cow print pants.

She also seems extremely dedicated to bringing back the MySpace-style mirror selfie. They often feature her #OOTDs.

Fashion is so important to Jaime that she's even developed a kind of Clueless-style virtual closet. According to Prestige, she has an app on her phone where she logs photos of all her items. That way, Jaime said, she can keep track of everything she has and "plan outfits when I'm on the go." Spoken like a true fashionista.