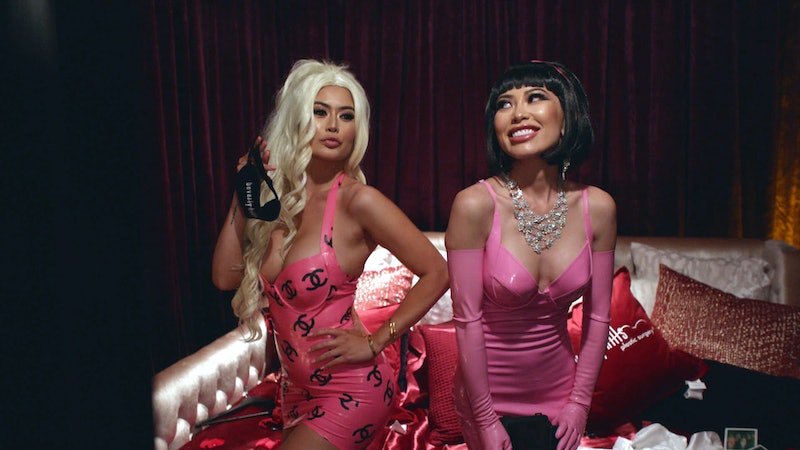 If the cancellation of Keeping Up With the Kardashians has you seeking out a new group of ultra-rich Los Angeles residents to obsess over, look no further. Netflix just released the trailer for Bling Empire, the streaming platform's latest reality show that follows a group of wealthy Asian and Asian-American individuals and provides viewers with a look at the ferocious drama that lies behind their lavish L.A. lives. It essentially reflects the status and exclusivity that you know from Crazy Rich Asians and Gossip Girl with the unhinged antics of Rich Kids of Beverly Hills, and you'll definitely want to give it a marathon watch.

The Bling Empire Season 1 trailer introduces viewers to its extremely affluent cast, beginning with Kane, who expresses his love for shopping and vibrantly declares, "The Asians are here!" We also meet Kevin, a model who shines a light on the difficulty of having toned abs, and Christine, the founder of Beverly Hills Plastic Surgery, who reveals that if she were in China, her family would be considered royalty thanks to her husband's ancestry. Then we're introduced to Kelly, who dishes that she's seeking love, and Kim, who's described as a "world-famous DJ." There's also Cherie, heiress to a denim fortune, and Anna, whose family is in the business of dealing destructive weapons.

Considering the group's major egos and sky-high financial stakes, they're bound to run into some conflict. "I feel like crazy attracts crazy," Christine says amid a supercut of dramatic moments to come throughout the series — all taking place in the most extravagant locales. According to the teaser clip, there will be some backstabbing, and the group will clash over money, trust, romance, and so much more in the first season of Bling Empire. The reality series hits Netflix on Jan. 15, so make room in your queue for your favorite new show.

More like this
Netflix's 'Bling Empire' Season 3 Trailer Includes A 'Selling Sunset' Cameo
By Kadin Burnett and Sam Ramsden
What Is 'Pretty Wild' Star Tess Taylor Up To Now?
By Morgan Leigh Davies
‘The Ultimatum: Queer Love’ Is Officially On The Way
By Radhika Menon and Kadin Burnett
Here’s When You Can Expect More ‘Indian Matchmaking’
By Brad Witter
Get Even More From Bustle — Sign Up For The Newsletter