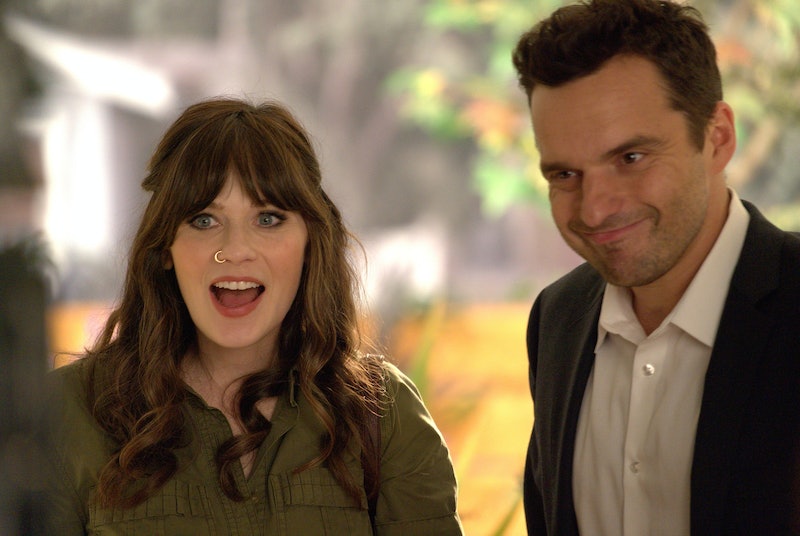 Jake Johnson's new Netflix comedy Hoops features plenty of appearances from his former New Girl costars, but there's one very famous resident of apartment 4D that fans won't be hearing from. In a new interview with Entertainment Weekly, Jake Johnson revealed he was "too embarrassed" to ask Zooey Deschanel to appear on Hoops, thus denying New Girl fans everywhere the animated Nick and Jess reunion they've been dreaming about.

After the outlet points out that three of New Girl's stars — Max Greenfield, Hannah Simone and Damon Wayans Jr. — make cameos on Hoops, the actor revealed that he also tried to get Lamorne Morris on the show as well, but there was a scheduling conflict. "You know, Lamorne was out because he wanted to play Coach Hopkins," Johnson said with a laugh, referring to the foul-mouthed basketball coach that he voices on the series. "No, the truth is that I believe there was a part where we tried to get Lamorne to do and there was something with scheduling."

However, it turns out that Johnson didn't even ask Deschanel to voice a character on Hoops, because he didn't think she would be interested in such a "disgusting" TV show. "Honestly, I would have wanted Zooey, but this show is so disgusting that I was a little embarrassed to ask her," he revealed. "I think I would have a hard time with Zooey in the room and me [yelling] "F*ck off, motherf*cker, you motherf*cking piece of sh*t!” Even though she’s not a prude, I would feel a little weird about it."

Still, Deschanel shouldn't be offended that Johnson thought Hoops might not be the show for her; during the interview, Johnson repeatedly stressed the outrageous nature of the show, and made clear that, despite the many cameos, New Girl fans may not enjoy it. "I’ve been saying if you like the first minute or the cold open where coach is yelling, if that doesn’t offend you, then I think you’re going to like the whole show. And if it does offend you, then you shouldn’t watch because I don’t think you’re going like the whole show," Johnson explained. "It doesn’t get better if you don’t like it. But I think what the writers have done a great job on is it takes a similar joke and keeps hitting it in different ways."

The series, which Johnson developed with friend and comedian Ben Hoffman, centers Coach Hopkins, a foul-mouthed, hot-headed high school basketball coach who is determined to do whatever it takes to turn his team of misfits into a winning squad in order to achieve his dreams of coaching in the "big time." And while his angry nature may remind some viewers of everyone's dream boyfriend, Nick Miller, Johnson made it clear that Coach does not have Nick's soft side.

"With Coach, even when he’s yelling it’s obviously one thing, but what we realized is he has to kind of be talking like that all the time or we lose who he is," he said, revealing that he often lost his voice while recording episodes. "We tried at first maybe when he yells ... and then when we did a quiet scene we thought, well, maybe it could be closer to my voice," Johnson continued. "And when we did that ... It just didn’t work, and it felt too close to Nick Miller and it felt too close to Peter Parker. And we just thought, let’s let Coach be Coach. He’s his own thing, he’s a character and I like playing him."

Despite emphasizing all of the differences between Nick and Coach Hopkins, Johnson did also reveal that he would be down to reunite with his former New Girl costars in the future — and in person, this time. "I love the cast of New Girl," Johnson said. "My thing is when I work with people and I like it, I like to do it again, so, for me, it’s just an opportunity to see a friend who is really talented."