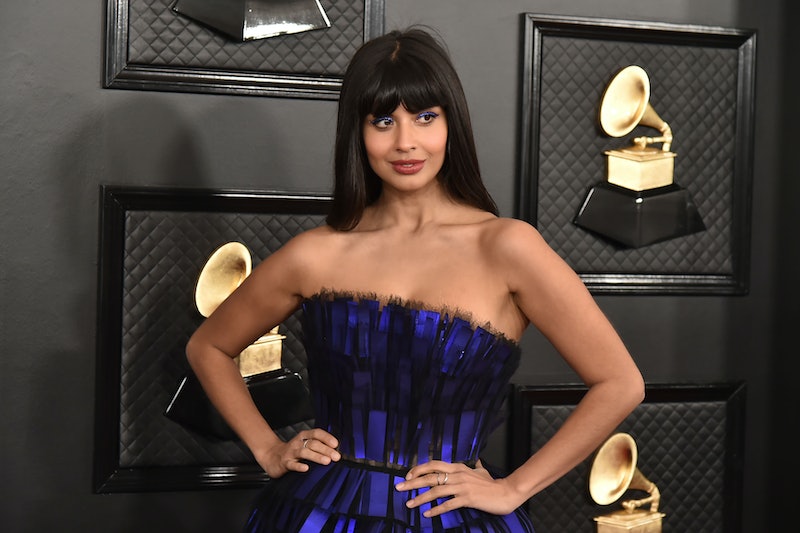 Jameela Jamil has never been one to let privilege go unchecked. She's used her platform in the past to raise awareness about the dangers of celebrity and influencer culture, and she's never been afraid of admitting her on complicity. After a fan complimented the actor on her "perfect" skin, Jameela Jamil called out beauty standards set by privileged celebrities — including herself.

On Sunday, The Good Place star posted a makeup-free selfie as she was about to get ready for the 2020 Emmys. When a follower commented about how "perfect" her skin looked, Jamil responded by explaining that her position as a celebrity lets her access "good quality nutrition" and lead a "significantly less stressful" life, allowing her to have clearer skin. Taking to Twitter the following day, Jamil responded to a user who had reposted her Instagram comment and called her annoying.

"They’d prefer, 'thanks! And if you buy my new diet tea, you could look EXACTLY the same'," she remarked. "Privilege exists in many forms, wealth, physical ability, race, beauty, size etc." She went on to explain that her decision to call out standards set by privileged celebrities comes from her own experiences idolizing them. "As a kid, I had acne, crooked teeth and was much bigger than actresses in my magazines," she wrote. "I maybe wouldn’t have spent my whole teens hating myself if they’d just been honest about the amount of privilege that plays into these things. So I’m gonna keep calling it out now I know!"

The actor has long been a champion of body positivity, encouraging others to not define themselves by their weight with her "I Weigh" movement and calling out celebs like Kim and Khloe Kardashian for promoting weight loss products on Instagram. "If you're too irresponsible to: a) own up to the fact that you have a personal trainer, nutritionist, probable chef, and a surgeon to achieve your aesthetic, rather than this laxative product," she reportedly commented on one of Khloe's posts in March 2019, "and b) tell them the side effects of this NON-FDA approved product, that most doctors are saying aren't healthy [...] then I guess I have to.”

In her tweet on Monday, Jamil further stressed the importance of speaking out on the privilege that allows celebrities to look the way they do, claiming that "comparison culture" has lead to a huge increase in self-harm, eating disorders, and suicide among teenagers, which has been supported by multiple studies on the effect of celebrities on body image and eating behaviors. Now, she's on a mission to begin "dismantling" the market for these quick-fix diet and aging products, and that starts with acknowledging privilege. "To call out privilege is what destabilizes the frenzy of self hatred in our youth/whole population," she wrote.