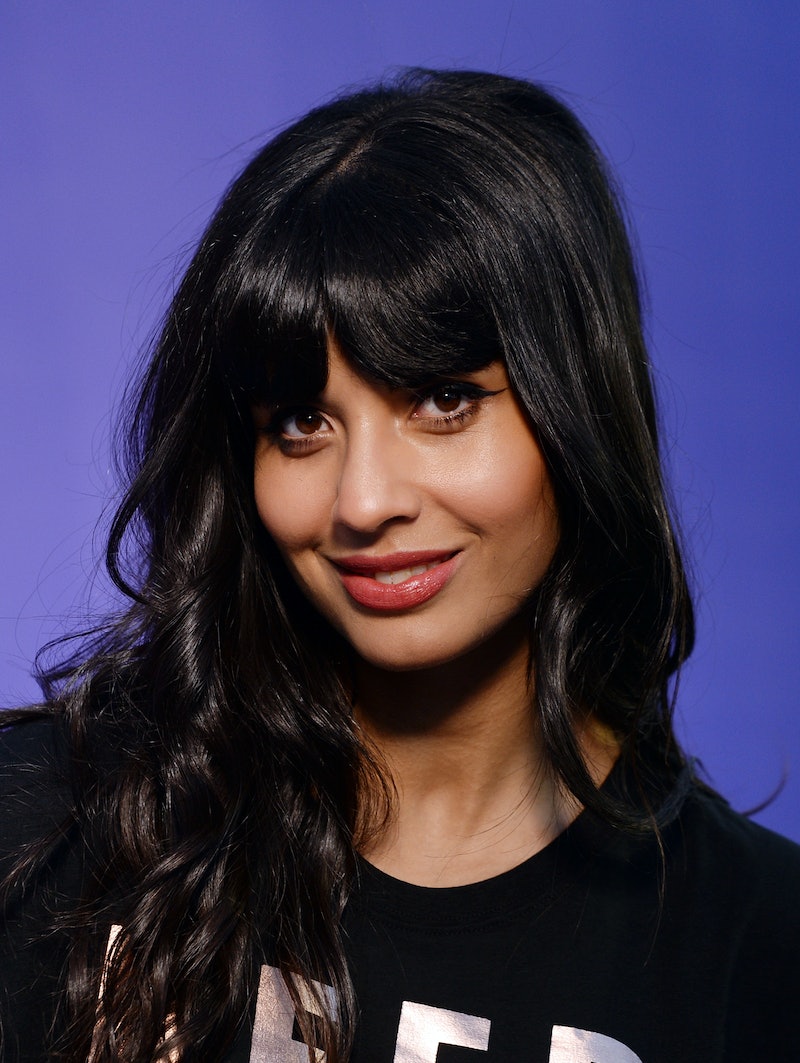 No sooner did photos of Jameela Jamil as Titania in She-Hulk: Attorney at Law hit the web than fans went to battle with Marvel’s newest villain. Their issue wasn’t with any of her evil deeds, but rather the way the character looked. While some Twitter users attacked Titania’s costume in the courtroom shot from the upcoming Disney+ series, others criticized Jamil’s wig. That’s when the actor had to step in to defend her “excellent hair stylist” — while also accepting “every ounce of shade” Twitter had to give.

The photo in question, she explained, had not only been taken after a 14-hour stunt day in Atlanta heat, but she’d also just been upside down. “She did a *great* job on the show I promise. I love her,” she wrote of her stylist, before joking, “Boobs look ok tho?” The alum of NBC’s The Good Place also attached a “Marvel BTS” TikTok video of herself in character with fresh hair and makeup, for good measure.

Jamil didn’t stop there, though, and replied to several critical tweets, writing, “I dutifully accept the crowd attack,” in one response. After another user chimed in that singer Doja Cat “ended” her, Jamil replied that she ended herself, later adding, “I’m an old lady comedy actor! Don’t be comparing me to young goddess superstar singers. Good grief!”

Premiering on Aug. 17, She-Hulk: Attorney at Law stars Tatiana Maslany as the titular Jennifer Walters/She-Hulk character, with Mark Ruffalo reprising his Bruce Banner/Hulk role, and Tim Roth returning as Emil Blonsky/Abomination. Marvel Studios describes the show as a take on a legal comedy, and Jamil certainly had plenty of laughs preparing for the role. “Hands down the silliest video I’ve ever made,” she captioned a July 2021 video of her She-Hulk fight training, set to the tune of Survivor’s “Eye of the Tiger.”

“It was an extraordinary experience and I had such an amazing bonding time with so many of the women on set. The script is so empowering, and hilarious,” Jamil told Hollywood Life in October 2021 of her experience filming the Jessica Gao-created series. “To also have an Asian woman at the helm of creating a show like this just feels really exciting. All of it just felt very of the moment, very necessary.” Adding that she “just can’t wait for people to see it,” the actor admitted that she was “also terrified because, you know, very vulnerable!”

Meanwhile, Maslany hinted that her attorney character’s courtroom battle with Jamil’s Titania will provide plenty of entertainment on what she described to Empire magazine as a “really absurd take on a legal show” and the “antithesis of most superhero narratives.” Noting that Jennifer is “in a career that’s male-dominated and incredibly vicious and hierarchical,” she added, “When she’s heading this superhuman firm, that’s where we get some really fun characters that she’s either defending or in opposition of.”

More like this
The First Trailer For 'That '90s Show' Includes So Many Nods To The Original Series
By Jack Irvin, Alyssa Lapid and Grace Wehniainen
'Wakanda Forever' Is Already Opening Doors For Mabel Cadena
By Grace Wehniainen
Ciarán Griffiths Is Making His 'Corrie' Comeback
By Catharina Cheung
'Doctor Who's New Companion Has Been Winning Acting Awards Since She Was 18
By Shahed Ezaydi
Get Even More From Bustle — Sign Up For The Newsletter