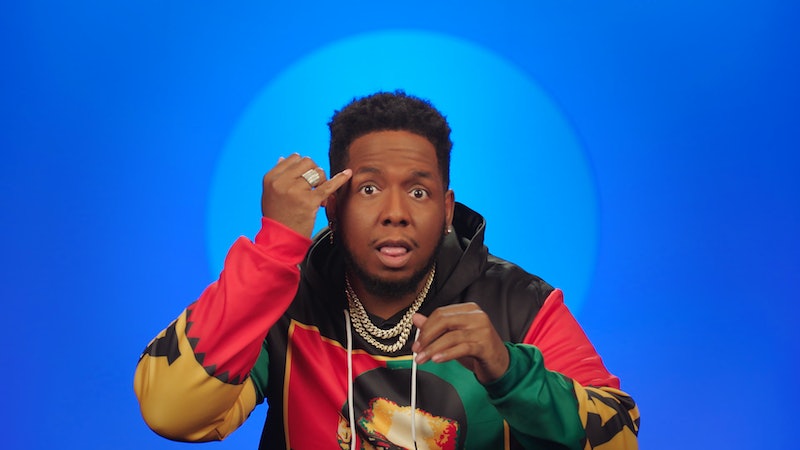 Heading into The Circle, James Andre Jefferson Jr. knew he wanted to play as his genuine self. “I have the confidence of Tom Cruise,” the self-described “loud, proud, Black” comedian said in his introduction package for Season 3. Seemingly proving the point, he added that he has no doubt he’ll walk away with the $100,000 prize. “I’m sure that I’m going to win this game. I’m a natural born manipulator. I’ll lie to the Pope to win this game.”

The 30-year-old Los Angeles native said he planned to play the role of the best friend and uncle to other contestants. The only thing he thinks could work against him? “What can go wrong is me coming in being myself and being loud might intimidate the shy people,” he said, but added, “Once you get to know me, [you’re] gonna love me.”

Read on for what else to know about James and decide for yourself.

On the show, James describes comedy as his “passion,” explaining that he’ll do whatever it takes to make people laugh. In a 2019 interview with VoyageLA, he said that he started his career when he was 13 years old after being inspired by a boy the same age named Lil JJ he saw on BET’s Coming to the Stage. He recalled taking the bus to comedy clubs trying to get stage time, unbeknownst to his family.

After doing his “first big college show” at Cal State Fullerton, James continued to do stand-up until he was 19 and discovered YouTube. “But my content in the beginning was too vulgar, which only led to me being suspended from YouTube,” he said. From 2009 to 2016, he experimented with different content and social media platforms before finding success on Instagram. “This time around I branded myself and I worked extremely hard on my craft,” the Off The Mic podcast creator said.

During his career, James has shared the stage with “big boss man” Nick Cannon. He also DJs on the side because, as he explained on The Circle, “sometimes funny don’t make money.” One of his DJ gigs was for LA’s Kiis-FM.

While choosing his profile photo for The Circle, James explained that he’s in a long-term relationship but is pretending to be single as part of his gameplay strategy. “People always ask me how I got [my fiancée],” he quipped. “She’s obviously a diamond. I’m a bus token.”

According to Instagram, James’ is dating the Los Angeles-based fitness and health entrepreneur Brittany Brown. In an August 2015 Instagram post, James indicated they’d been together for seven years, meaning they would’ve recently celebrated their 13th anniversary.

Brittany has an impressive Instagram following herself. “Yes he’s loud and plays too much but one thing he don’t play bout is me,” Brittany captioned a Feb. 14 Instagram post with James for her more than 54,000 followers. “Everyday is #valentines with you daddy.”

The couple often does joint comedy videos, and in 2016, Brittany even got Kevin Hart to give James a birthday shoutout in a video.

On his celebrity-filled Instagram, James recently posted a video with Megan Thee Stallion captioned, “That one time I annoyed Megan Thee Stallion and she low-key roasted me.” Other stars who’ve popped up in James’ Instagram photos and videos over the years include Cannon, Hart, Ice Cube, Mike Tyson, Tyga, Meagan Good, and several Jersey Shore cast members. (He and Mike “The Situation” Sorrentino even compared abs in one shot.)

James has described his viral Instagram videos as minute-long “rants” about pop culture. Recently, he’s talked about Jake Paul’s boxing career, Michael B. Jordan and Lori Harvey’s relationship, and the Gorilla Glue girl. “I am proud of my impressions,” James told VoyageLA in 2019, adding that he gets more likes, comments, and views than “someone with two million followers” and loves that he has “a lot [of] supporters around the world and just not in America.”

His experience running successful social media platforms will certainly work to his advantage on The Circle.