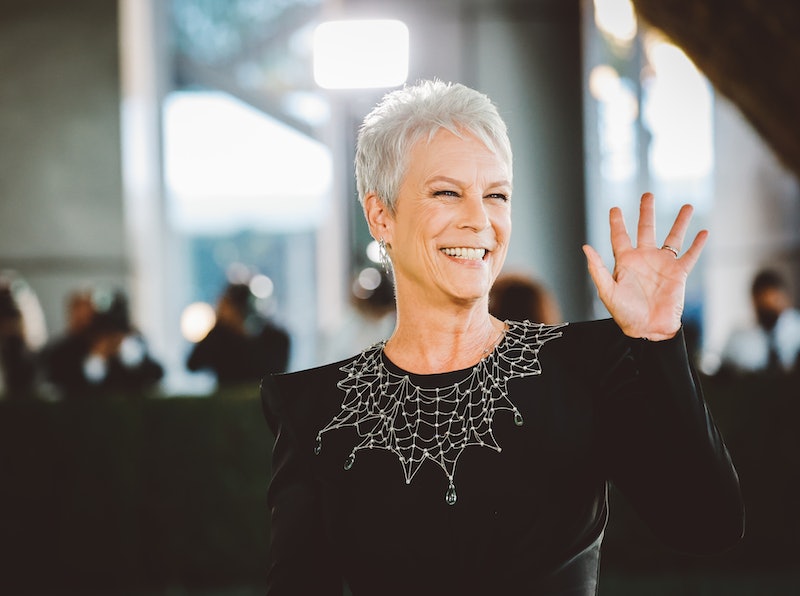 Jamie Lee Curtis has been hard at work promoting her latest film, Halloween Kills. Last week, she made headlines for paying homage to her mother, Janet Leigh, by dressing up as her iconic Psycho character at the film’s premiere. Little did fans know, Curtis was accompanied to the event by her daughter, Ruby, in one of her first public appearances since coming out as transgender last year, per photos published exclusively in People. In a new interview with the magazine, Jamie Lee and her daughter spoke extensively about Ruby’s coming out journey.

Speaking to writer Jason Sheeler, Ruby said announcing her trans identity to her parents, Jamie Lee and director Christopher Guest, didn’t come easily — despite their immense support of her bisexual identity, which she’d previously disclosed to them. “It was scary — just the sheer fact of telling them something about me they didn't know,” said Ruby. “It was intimidating — but I wasn't worried. They had been so accepting of me my entire life.”

Questions about her gender identity began to emerge in Ruby’s mind as a teenager, she detailed, noting that a “negative experience in therapy” led her to wait longer than she “probably should have” to come out. “Then, seven years later, still being Tom at the time, I told the person who is now my fiancé that I am probably trans. And they said, ‘I love you for who you are.’” While she’s historically kept her personal life private, coming out has led Ruby to feel more comfortable with sharing her story. “Me coming out has nothing to do with my mom being famous,” she said. “I’ve tried to stay out of the spotlight for many years, or at least done my best to. I’m happy to be more visible if it helps others.”

Jamie Lee first opened up about her daughter’s trans identity in a July interview with AARP magazine, revealing that she will officiate Ruby’s upcoming wedding. The actress told People she’s been committed to learning and becoming “a little more mindful” about her language since Ruby came out. “I am new at it. I am not someone who is pretending to know much about it. And I'm going to blow it, I'm going to make mistakes. I would like to try to avoid making big mistakes,” she said. “You still mess up, I’ve messed up today twice. We’re human... But if one person reads this, sees a picture of Ruby and me, and says, ‘I feel free to say this is who I am,’ then it’s worth it.”

More like this
"Lavender Haze" Star Laith Ashley Breaks Down Filming With Taylor Swift
By Jake Viswanath
Adam Lambert Called Out The George Michael Biopic Over Potential Casting
By Sam Ramsden
Jameela Jamil Defends Sam Smith After Trolls Body-Shamed Them
By Jake Viswanath
Gen Z Are Twice As Likely To Identify As Queer, According To New Data
By Sam Ramsden
Get Even More From Bustle — Sign Up For The Newsletter
From hair trends to relationship advice, our daily newsletter has everything you need to sound like a person who’s on TikTok, even if you aren’t.