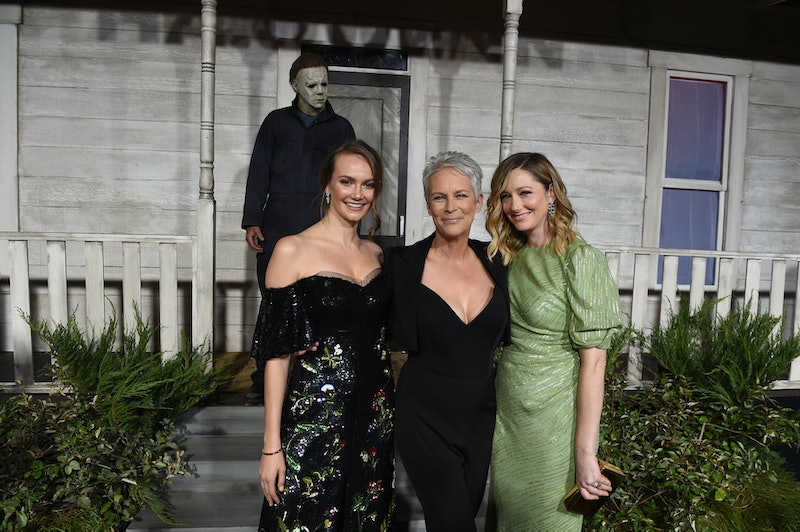 Although horror buffs will have to wait another year to see the full movie, Jamie Lee Curtis' Halloween Kills behind the scenes video still gave fans their first look at the new Tommy Doyle, played in the 2020 Halloween sequel by Anthony Michael Hall. "'Tis the season..... to start screaming," Curtis captioned the Oct. 31 Instagram "first look" video. She made her acting debut as Laurie Strode in John Carpenter's original 1978 slasher film and further summarized the clip as showing "the mayhem" director David Gordon Green has created, using the hashtag "#strodestrong."

Filled with creepy imagery reminiscent of the original (plus that theme song), the sneak peek shows Curtis' character attempting to show her "Strode strong" side, as she lay bloodied on a gurney. This isn't the first time viewers have seen Laurie in peril at the hands of Michael Myers, but it is their first time seeing Hall as the adult version of Tommy, aka the young boy Curtis' Laurie babysat on Halloween night in the 1978 film. (In that iteration, actor Brian Andrews played Tommy. Paul Rudd later portrayed the same character in 1995's Halloween: The Curse of Michael Myers.) Hall's Tommy can be seen in the clip gripping a baseball bat while drowned in red light.

Also appearing in the video montage is Judy Greer, who's reprising her role as Laurie's daughter Karen (wearing the same Christmas sweater from 2018's record-breaking Halloween sequel, in the clip). In another scene Andi Matichak's Allyson is climbing out of a car with a shotgun in her hands, adding her to the list of returning characters as well. Actor Nick Castle, who played Michael Myers in the 1978 original, is also returning to again fill the role of the murderous masked villain in Halloween Kills, which is slated to premiere on Oct. 16, 2020. (Universal Pictures plans to follow up with Halloween Ends on Oct. 15 2021, per Variety.)

Tommy isn't the only of Laurie's previous babysitting charges returning for Halloween Kills. Real Housewives of Beverly Hills star Kyle Richards will reprise her role of Lindsey Wallace from the 1978 Halloween, she confirmed in an Aug. 30 Instagram post. Along with a photos of herself and Curtis taken 40 years apart, Richards wrote she has "always been so proud to have been a part of Halloween" and that "bringing Lindsey back is very exciting." In her own Aug. 30 Instagram post, Curtis reacted to Richards' casting as "completing the circle!"

After posting a Halloween Kills teaser to social media on July 19, Curtis share a photo from the Halloween Kills set months later in October. "NEVER SAY DIE! First day back in the battle for my life!" she captioned the Oct. 8 photo of herself as a bruised and beat-up Laurie Stroud. Curtis previously shared her reason for signing on for the upcoming sequel, describing the movie as "really giving Laurie great honor to acknowledge that her experience of her life was very challenged" in a Sept. 16 Collider interview. She further elaborated that Halloween Kills is "going back to really unpack the first movie, bringing back all those characters whose lives were affected by what happened in 1978."

Despite Halloween Kills' big screen premiere being about a year away, Curtis' BTS video may have just been the holiday treat fans need to hold them over until then.

More like this
Anne Hathaway Shared A "Thrilling" 'Princess Diaries 3' Update
By Darshita Goyal
James Cameron May Come To Regret His 'Titanic' Door Experiment
By Stephanie Topacio Long
Taylor Lautner Copped To Finding Jacob "A Little Annoying" In Twilight
By Stephanie Topacio Long
Reese Witherspoon Confirms This Fan Favorite Will Return For 'Legally Blonde 3'
By Jake Viswanath
Get Even More From Bustle — Sign Up For The Newsletter
From hair trends to relationship advice, our daily newsletter has everything you need to sound like a person who’s on TikTok, even if you aren’t.