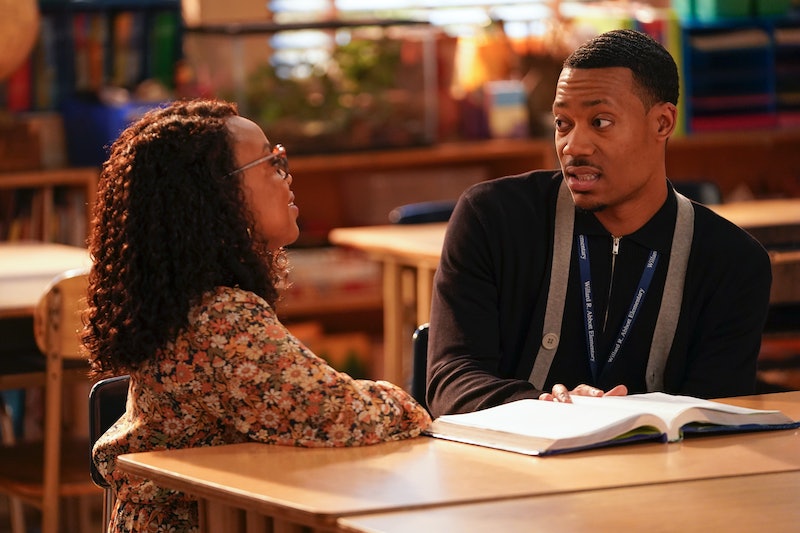 Quinta Brunson has made no secret of her plans to make Abbott Elementary’s Janine and Gregory a slow, slow burn. “We want to explore this relationship,” the series star and creator told TVLine in February, “but sometimes, all you’re having is a crush.”

Brunson echoed those sentiments in June, telling E! News that Janine and Gregory “really need to grow” as people before pursuing anything romantically. “I think we really wanna show the modern experience of these mid-20 people and what growth is really like on network television,” she added. “We’re excited to show that.”

Still, shippers need something to get by — and during the Abbott Elementary winter finale on Dec. 7, they got exactly that. After Brittani Nichols, a writer and producer for the show, tweeted that the episode was “not to be missed,” and one you’d “want to be tuned in live” for, fans were on especially high alert.

So, what went down? In the latest episode, Janine kicks off her winter break by going to a local hookah bar, in the hopes that she might find a guy there. And she does! Only it’s Gregory, who, unbeknownst to Janine, also planned a night out at the same bar.

After shaking off the awkwardness of running into each other outside of work, Janine and Greg started dancing together — like, dancing.

The pair was ultimately interrupted by Ava who, of course, was also having her own night out at the hookah bar.

But the flirtation didn’t stop there. Janine and Gregory were able to sneak off for some air outside, where perfectly timed snowfall created the ideal environment for a kiss. “Beautiful,” Gregory tells Janine — not at all talking about the snow, really.

However, shippers will have to wait a while longer for Janine and Gregory to kiss — because right as they were about to lean in, Gregory got a text from Amber, and went to go find her instead. Naturally, fans reacted to the ill-timed twist.

Even though it was stopped way too soon, the sweet moment between Janine and Gregory definitely feels like a step forward in their relationship — whatever that means, for now. So, when will Abbott Elementary return? As Brunson revealed in a tweet, the show will be back on Jan. 4, so you won’t need to wait too long to catch up with Janine, Gregory, and co., and see how they’re faring after that steamy night out.

More like this
Keyla Monterroso Mejia Is Finally The Star Of The Show
By Gabrielle Bondi
Melanie Lynskey Plays A “Ruthless Leader” In 'The Last Of Us'
By Brad Witter
Pedro Pascal Barely Got Through The "Lisa From Temecula" 'SNL' Sketch
By Stephanie Topacio Long
Grammys Host Trevor Noah Made Adele's Dream Of Meeting The Rock Come True
By Brad Witter
Get Even More From Bustle — Sign Up For The Newsletter
From hair trends to relationship advice, our daily newsletter has everything you need to sound like a person who’s on TikTok, even if you aren’t.