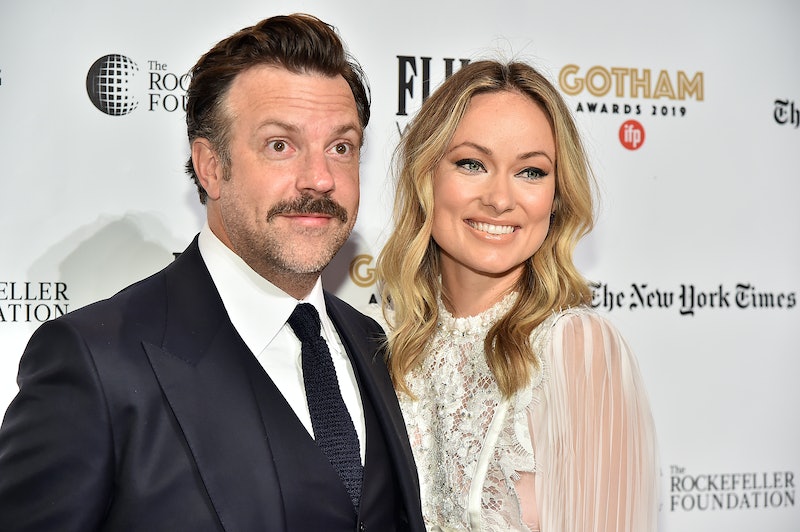 After roughly 8 years, two children, and countless creative collaborations, a Hollywood power couple has called it quits. Olivia Wilde and Jason Sudeikis have ended their engagement, People reported on Friday, Nov. 13. The pair — who are parents to 6-year-old Otis and 4-year-old Daisy — reportedly split "at the beginning of the year," bringing an end to their seven-year-engagement. They are now focused on amicably co-parenting their kids together. "The children are the priority and the heart of the family’s relationship," a source close to the couple told the outlet.

After meeting at a Saturday Night Live after-party, Wilde and Sudeikis began dating in 2011, and the comedian popped the question around the holidays a year later. "I actually came off looking a little cooler than I really am because I had heard through the grapevine, through mutual friends who weren't exactly her best girlfriends, who would report back, 'Oh you know, I think she’s dating someone,'" Sudeikis told Stephen Colbert in 2017 about the night he first met Wilde. "So I didn't make any moves. I was just very, very busy with other things. And next thing you know, I stopped being busy, she stopped dating someone, and then it was off to the races."

In 2013, Wilde told Allure that even though she had been instantly charmed by Sudeikis, it took months — and many run-ins with one another — before he finally asked her out. "Over the next six months we kept running into each other," the actor and director recalled. "[One night], my best guy friend walked up to him and said, 'This is Olivia’s number. Use it.' That was the beginning."

Though the pair weren't in a rush to tie the knot — Sudeikis told Jimmy Kimmel in 2019 that they just "have bigger fish to fry" — they welcomed son Otis in 2014 and daughter Daisy in 2016. Both Wilde and Sudeikis have praised their partner as a dedicated and caring parent over the years; in 2016, the Ted Lasso star told People that he was proudest of the fact that he decided to become a parent with "the right person. When I look at Olivia and the way that she pulls off all these things ― it’s gonna be easy for [Otis] to grow up in a house of love and respect because I feel that way about his mom ... It really is. I think that that’s ... probably what I’m most proud of."

In addition to supporting one another at home, the couple also stood by each other throughout their career, with Sudeikis playing a key role in Wilde's directorial debut, Booksmart. "That was great," she told People about directing her fiancé as part of the project. "He’s one of the best improvisers in the world so I knew I could cast him. He’s like spinning a top and just letting it roll. It’s really amazing to see him do his thing."

Joking that their "entire relationship" was Sudeikis' audition for Booksmart during an interview with Entertainment Tonight in 2019, she continued by praising his skill and comedic timing. "There's still a shorthand that comes from being someone's closest partner, but I loved being able to just set him free because he's one of the best improvisers in the world," Wilde said. "And I just loved that we got him to take this bit of information that we had in the script and run with it."

Neither Wilde nor Sudeikis has publicly commented on the split yet, but the SNL alum did recently praise Wilde as a director while talking about her upcoming film Don't Worry Darling. "It's amazing to see her resilience and she just works her butt off," he told ET on Nov. 12. "She's editing the stuff they already shot. She's using her time and she has so many other projects in the works that she kicks ass that way."

More like this
Olivia Wilde Addresses *Those* Florence Pugh & Shia LaBeouf Rumours
By El Hunt and Sam Ramsden
‘SNL’ Finally Spoofed Nicole Kidman’s Weirdly Beloved AMC Ad & Nailed It
By Stephanie Topacio Long
Paul Mescal, Man Of Mystery
By Samantha Leach and Heather Hazzan
Here’s Everything Coming To & Leaving Netflix In October
By Jake Viswanath
Get Even More From Bustle — Sign Up For The Newsletter