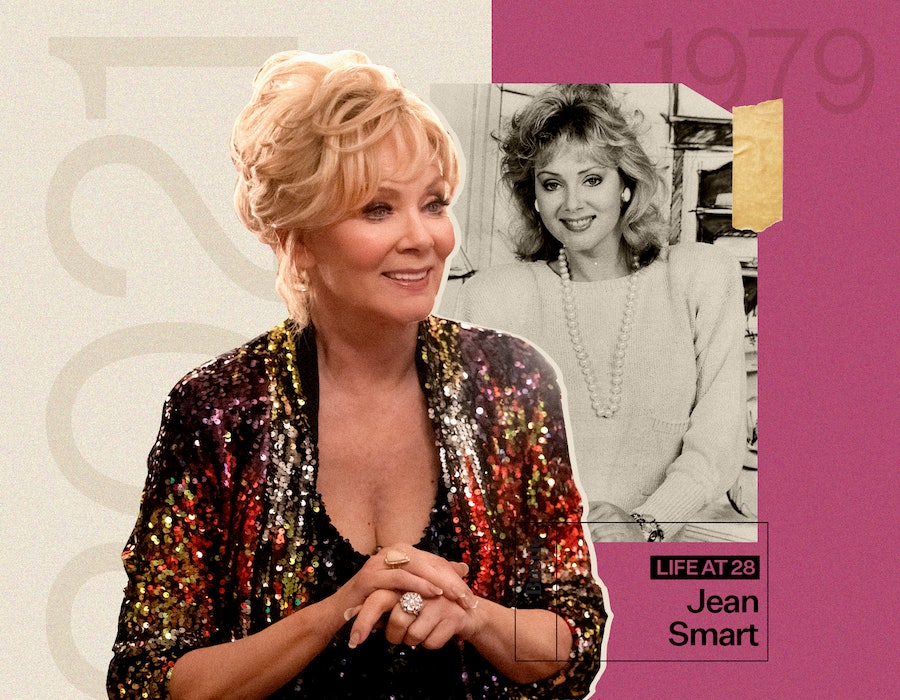 In Bustle’s Q&A series 28, successful women describe exactly what their lives looked like when they were 28 — what they wore, where they worked, what stressed them out most, and what, if anything, they would do differently. This time Jean Smart — who stars now in the new HBO Max show Hacks — discusses the year she moved to New York from her native Seattle and got the part that changed her life.

You won’t find Jean Smart on screen before 1980. Though the actor is known for a wealth of TV and film performances — including on Hacks, Watchmen, Designing Women, 24, Fargo, I Heart Huckabees, Samantha Who?, and an award-winning turn on Frasier, to name a few — there was a time when Smart was strictly a theater actor.

“I don’t remember thinking about movies and TV that much,” Smart tells Bustle. “I’d been trained to be a stage actor, and I loved it.”

Part of that was her location: growing up in Seattle, Washington, Smart fell in love with acting thanks to a great high school teacher, and attended the University of Washington for their excellent drama program. For a few years after she graduated she stayed local, steadily working in the booming local theater scene and the Oregon Shakespeare Festival.

But even as a young actor working her way through Pacific Northwest regional theater, she got attention. Coverage from her early productions was sometimes mixed, but more often presages the Smart we know today: she’s “super,” breathing “sparkling, vital, believable life” to a Shakespeare classic; a “first rate” part of excellent casts, capable of crafting “especially fine work” and “touching moments,” singled out for her “strong and impressive” performances and increasingly lengthy resume.

At 28, she finally felt ready to take a leap and move to New York for a bigger chance at stardom. After a summer of auditions, Smart landed an audition that would lead to Last Summer at Blue Fish Cove, the play that took her career to the next level.

Below, Smart, now 69, talks about her decision to uproot her life at 28.

At 28 I was still doing just theater. I had not done any camera work; I was still living in Seattle. I was deciding to move to New York in the summer of 1980.

What are your standout memories from that time in Seattle?

I remember one night I was watching a movie on TV with my mother a few days before I was moving to New York. And she was very supportive of it and everything, but she’s still a mom. And we were watching this movie and Jill Clayburgh was in it, it was set in New York. There’s this scene where she was walking down a dark street, and she gets beat up, and it was bad. And my mother just lost it. “I don’t want you to go! I don’t want you to go to New York!” And I felt bad! But I was like, Sorry mom, I gotta go.

My first few days in New York I was just excited to be there and to see what was going to happen. I called the two people I knew and moved into my friend Beth’s apartment for a little while, then I got my own little place. It was very exciting finding my way around the city, and I loved the Upper West Side, the canal, the park.

Were there types of roles you sought out, hoped for or got typecast for?

I was never typecast! Although I did play a lot of the great villains of literature. I think it would’ve been fun to do more ingenue-y type things when I was young enough to pull them off, but it didn’t work out that way.

How were you feeling about your career and the big move to New York? It seems like such a pivotal moment in any acting career.

Oh absolutely, absolutely. I had a wonderful acting coach named Eve Roberts, and she connected me with a casting director in New York. I knew a girl a little bit in New York who helped me find an apartment in the Upper West Side — it was a four story walk-up, which I would not be able to do today; I can’t even imagine! It’s like you get down to the bottom of the stairs and if you’ve forgotten something — if you can literally survive without it you don’t go back up.

I would just look at the trades every day and see if there was something that I could audition for, some little Equity Waiver production of something. And especially if it was something that was close to her apartment … sometimes those auditions took precedence [laughs].

One of them happened to be — sort of my good luck charm — right near my friend’s apartment. So I went, and it was for a play by Jen Chambers, and they cast me in the lead. We started rehearsing the play and all of a sudden the director — who had never directed a play before, she was a cabaret singer; Nyla Lyon, God bless her soul — she got a call from the playwright’s manager who said, “Uh, excuse me, who are you? And who told you you could do my client’s play?” She didn’t even know she had to get permission to do the play. So that came to a screeching halt. But the manager was so nice she said, “Jane happens to have a play that’s been sitting in a drawer for quite a while, it’s never been read anywhere: The Last Summer at Blue Fish Cove.” And if you want to do that one you can do that one.

I was lucky in Seattle because in school we were exposed to every genre of theater style, from commedia dell'arte to Greek tragedy to Shakespeare to Ibsen; I did a lot of O’Neil. It was a wonderful education and it gave me an enormous amount of confidence. So even though sometimes I thought, Maybe I should have gone to Hollywood straight out of college back when I was still young, I cannot regret those years I spent doing theater, because it really just made me who I am, you know?

I’ve had casting directors tell me that they can spot theater trained actors right away, it’s just a huge difference. Some of it’s confidence, some of it’s the way they use their voice. And also it’s not acting just from the neck up, you act from the feet up when you’re on stage. When I first moved to LA I met an actress who had never even done a play and it was just jaw dropping to me, I didn’t even know such people existed. How do you become an actress if you’ve never done a play? But you meet a lot of people where someone told them when they were in high school Well you’re really cute; you should be an actor. I used to always think, if you have to be good looking to be an actor, who plays all the other parts?

I’m wondering how it felt to move to New York with an “I’ll land where I land” mentality, and by the end of the year you’re being reviewed by The New York Times. What did it feel like to go from 0 to 60 that fast?

I guess it didn’t feel 0 to 60, it just felt great. I mean, I knew that I was lucky and fortunate. It was just all very exciting and I was just happy that things were going the way I hoped they would go. I had a lot of confidence from my theater background already before I came to New York, so it just felt right, it felt good. It just felt like this is the beginning.

What was a typical Friday night like when you were 28?

I guess [it was] mostly just about where’s the next job, what’s the next job going to be; you need to pay the rent … I remember thinking it was very hard to meet guys, but I guess when you’re doing a play about lesbians and everyone in the audience is a lesbian that’s probably not real helpful [laughs]. I was always doing the show; my personal life was really dull. But it was great fun.

What advice did you get during that period that you still carry with you today?

I always trusted my instincts. I got kind of greedy when I was [that age] because I was cast in the play, Last Summer at Blue Fish Cove, and then my agent got me an audition to play Lady Macbeth at the Pittsburgh Public Theater in the old Carnegie Hall. And I thought Oh wow, that would be a part to I would like to play, but I don’t want to turn down a full Equity Waiver show even though it’s no money at a hole in the wall on the Lower East Side.

I managed to do both — something you could only do when you’re that young. I would fly to Pittsburgh, I would rehearse three days, and then I would fly to Newark, New Jersey, jump off the plane, get on the subway, and hit the theater just in time, because Equity theater plays were usually Thursday through Sunday. I would do the show Thursday, Friday, Saturday, Sunday, and rehearse Lady Macbeth every day. And I did that for weeks. It was thrilling. I loved it. And then the play was over by the time Macbeth opened up. Then we moved Blue Fish Cove to a bigger theater.

Once you had a regular paycheck, what sorts of things did you splurge on as a 28-year-old?

I was brought up to be thrifty; I came from a Scottish family [laughs]. Let’s see… not much! I didn’t buy a car until I moved to LA. I stayed in the apartment I was in — it was like $475 a month, imagine. I don’t even want to think about what that’s going for now. [But] I don’t remember splurging a whole lot. Maybe flying home more often than I would when I was flat broke.

Is there anything you regret or would have done differently?

Oh yes — I would’ve pursued musicals. The man who ran our program at the University of Washington, he looked down on musicals, he didn’t consider them “legitimate” theater.

I did a program in LA called “Encore!” where they did stage readings of classic musicals that don’t get done every often. And I did the very first one here [in LA] with Jason Alexander, we did Promises, Promises. And it turns into much more than a stage reading, basically it turns into a full-blown production, everybody learns their lines, with choreography. But it was just a short run. It was one of the most fun things I’ve ever done in my entire life. And I thought: why, why, why, why didn’t I do this earlier?

What was the most useful thing you learned from that time?

Just not being afraid to just go for it, like when I was doing the two shows simultaneously. It was thrilling — I was doing two incredible, incredible roles. And you can only do [that] at that age.

Don’t ever be afraid to ask, you know? People can always say no. But stick up for yourself.

More like this
At 28, Debra Jo Rupp Was Living A Much Different '70s Show
By Grace Wehniainen
Here’s What Happens To Bill & Frank In 'The Last Of Us' Video Game
By Brad Witter
At 28, Rosie Perez Risked Her Career To Stop Playing Stereotypes
By Gabrielle Bondi
The 'Gossip Girl' Reboot Creator Is “Looking For A New Home” To Air A Potential Season 3
By Brad Witter
Get Even More From Bustle — Sign Up For The Newsletter
From hair trends to relationship advice, our daily newsletter has everything you need to sound like a person who’s on TikTok, even if you aren’t.