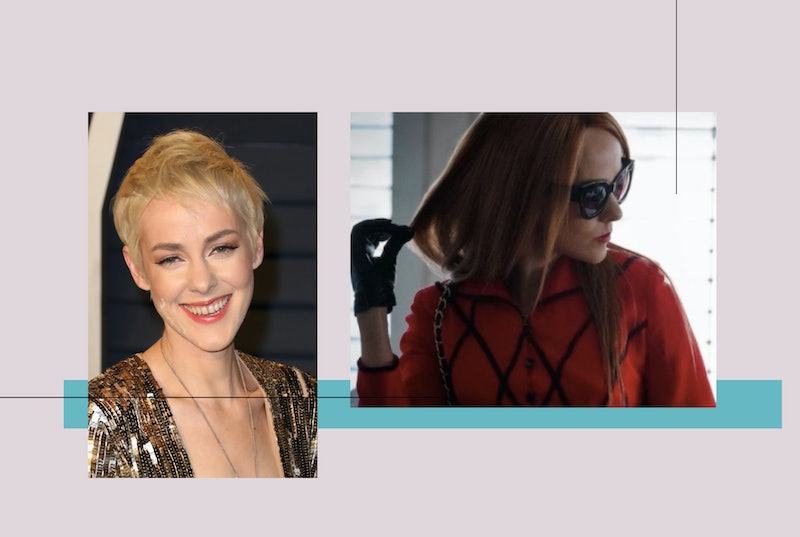 Early on in Antebellum, Jena Malone's character Elizabeth strolls across her pristine, 19th-century style plantation to inspect the new crop of enslaved Black women who have just arrived. The bonneted Elizabeth examines the shackled women's skin, hair, thighs, and teeth — all while her young daughter gleefully looks on. "That shook me," Malone, 35, tells Bustle. "[Afterwards I needed] a good, damp cry, a beer, and hot shower.”

Written and directed by Gerard Bush and Christopher Renz, the controversial Antebellum stars Janelle Monáe as Veronica Henley, a modern day author, sociologist, and activist who finds herself kidnapped and forced into a mysterious rendering of Antebellum-era slavery. Malone’s Elizabeth also straddles the film’s dual settings. On the plantation, she's the owner’s daughter and head of the estate; in the contemporary world, she's a wealthy socialite with secret ties to white supremacy. "The whole thing was eye opening for me," says the former Hunger Games star. "Getting into that world of alt-right white supremacy [was] terrifying."

To understand Elizabeth, Malone did historical research, diving into records and articles from the time period and reading a book about women who ran their own plantations. "I wasn't really familiar with that subculture," Malone says. "Even as you dive into the sort of male-driven plantation world, women actually were doing a lot." But finding material on 19th century female slave owners was surprisingly much easier than researching modern women with covert alt-right tendencies like Elizabeth. "There's such a level of secrecy around that type of woman,”" Malone says. “I kept turning up things that were a lot of hearsay and piecing together conversations and researching deep, deep articles.”

“Elizabeth is not quite a 'Karen,' but not quite an Ivanka. She's sort of somewhere between; it's a slippery world."

That’s when Bush and Renz intervened, giving Malone a list of women to follow on their social accounts. While Malone won’t reveal who those women were, there’s one name she doesn’t shy away from mentioning: Ivanka Trump. “Elizabeth is not quite a 'Karen,' but not quite an Ivanka. She's sort of somewhere between; it's a slippery world,” she says. “But like Ivanka, there's giant money that allows a certain level of behavior and indoctrination. They don't even have to do anything, their name is on so many things.”

Like the Ivankas of the world, Elizabeth’s perfectly manicured outward appearance belies her secretly sinister behavior. "Elizabeth is the kind of woman that is invisible in plain sight, she's just hiding right in front of you," Malone says. "There's like a commanding power to her. There's a charm, there's great ease there. She's a woman of moderate distinction. You can't even smell the blood underneath her fingernails." Which is why Bush, Renz, and Malone didn't want to imbue Elizabeth with any kind of obvious white supremacist trappings— these types of women "pass." Elizabeth appears so charming that she’s even able to talk a hotel worker into letting her into Veronica's hotel room without her permission. Because what harm could she possibly be doing there? "You wouldn't be able to find one thing wrong with [these women]. They say the right thing. They get by with the right tools," says Malone.

That challenge is what drew Malone to the role. "This felt like some sort of ancestral call," she says of playing Elizabeth. "When you think about healing ancestral trauma, where does a white cis female exist in that realm? How do you begin to heal those stories while portraying those stories?” For Malone, it starts with exposing the Elizabeths of the world for who they truly are.