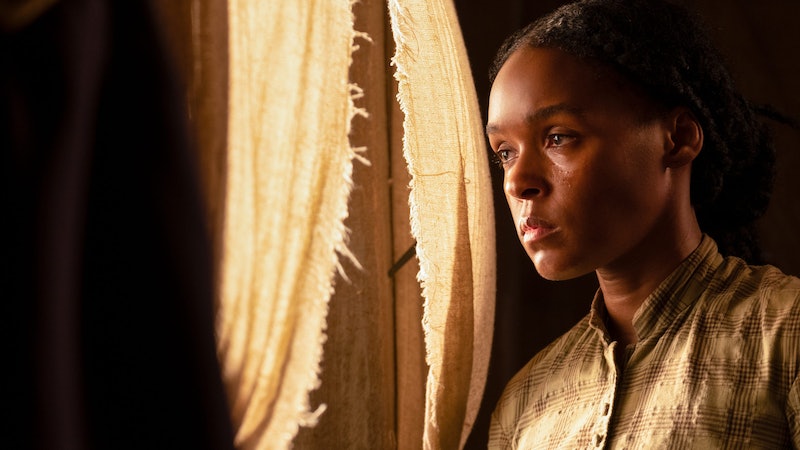 In the age of COVID-19, watching a movie has become a wildly different experience. With the majority of theaters around the nation still closed, some new releases are switching to a premium-priced VOD format in an attempt to recoup their production costs in the absence of a theatrical release. The latest to do so is the slavery horror film Antebellum, which will be available to rent on Sept. 18 for the price of $19.99. Here's everything you need to know about Antebellum, from the plot to the reviews.

Antebellum is a psychological horror film about Veronica Henley, a modern-day Black woman who is seemingly transported back in time to the 19th century, where she is forced to live as a slave in the Antebellum South. It's Henley's mission to free herself and others and take them back to the modern time period before it is too late.

The film stars Janelle Monáe as the lead protagonist, seen both in the present-day as Veronica and as the enslaved Eden. Joining her in the cast are Gabourey Sidibe as Veronica's best friend, Marque Richardson as her husband, and London Boyce as her daughter. The main villains are Jack Huston as Eden's plantation owner, Eric Lange as a confederate senator who torments her, and Jena Malone as the mistress of the plantation. The film was written and directed by first-time filmmakers Gerard Bush and Christopher Renz.

How Scary Is It?

Antebellum is not a horror movie in the sense of, say, The Exorcist. What's scary about the movie are its depictions of racism and the upsetting violence that it displays. There are rape, torture, and murder scenes throughout the movie, and it's Black people who are most often at the receiving end of this violence. The film has an R-rating partly for "disturbing violent content," so many viewers may find the film difficult to watch for its violence, but don't expect a traditional horror movie experience.

How Sad Is It?

This is a movie that depicts the enslavement of Black people in America, as well as the systemic racism that continues today. There are many scenes of Black people suffering in the film, and some meet a tragic end. The current social climate that was awakened by the killing of George Floyd makes the movie hit even harder.

What Are The Critics Saying?

Antebellum has been savaged by critics. The film currently has a rating of just 35% on Rotten Tomatoes, with the site's consensus reading, "Antebellum fails to connect its images with any meaning, making for a largely unpleasant experience lacking any substantial scares." In a review for Vulture, Angelica Jade Bastién wrote, "Antebellum ends up being a noxious tour of historic violence against Black folks in service of a story that has nothing novel to say about the obliterating function of whiteness and anti-Black racism." It's a critique that many other reviews have shared, underscoring that the film brutalizes Black people just for the sake of brutalizing Black people.

Antebellum is officially available to rent starting on Sept. 18.