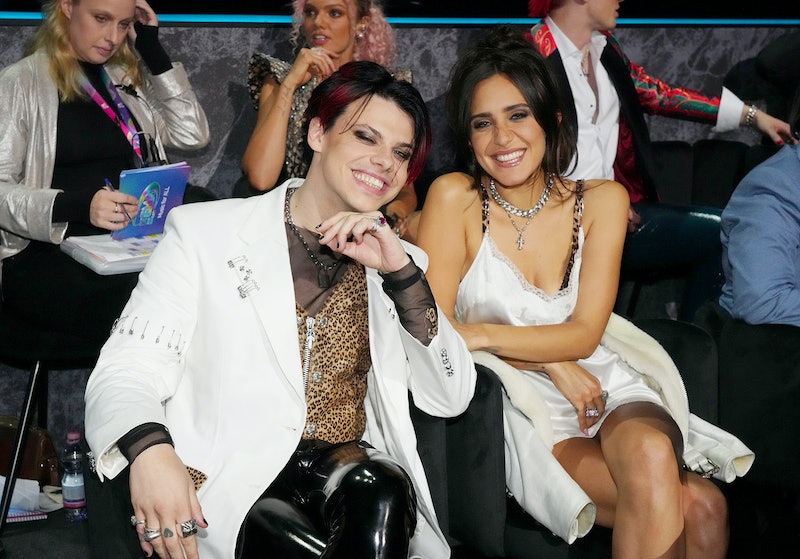 Ever since British rockstar Yungblud burst onto the music scene with his riotous punk rock anthems, the musician was soon linked to a variety of celebrity music stars, including Miley Cyrus and ex-girlfriend Halsey. Putting rest to rumours, back in April 2021, the 23-year-old confirmed that he is dating American singer-songwriter Jesse Jo Stark, telling his 3.6 million followers that Stark is the “Luv of my f— lyf.” And it seems the pair have been inseparable since.

Since their social media soft launch in 2021, the edgy couple has been sharing the sweeter aspects of their rock and roll relationship on social media, from wearing matching leopard print outfits, steamy PDA to more recently, Yungblud surprising Stark, 30, with a huge bouquet of roses on Valentine’s Day.

From the looks of it, the relationship is having a positive impact on Yungblud’s music career. Yungblud’s (real name Dominic Harrison) most recent album, Weird!, covers “gender and sexuality and drugs and love and heartbreak”, the latter of which he says was hard to write. As the Strawberry Lipstick star told People magazine in December 2021, "I never write love songs, man...But then I met someone who completely changed my world inside out and upside down.”

Love clearly is in the air for the musician, who recently dedicated his track Love Song to a newly-engaged couple at his concert in North Carolina. As the couple continues to ride high on their blossoming romance, here’s Yungblud and Jesse Jo Stark’s relationship timeline.

A rock and roll music video appears to be one failsafe way to soft launch a new relationship. Jesse Jo Stark was front and centre in Yungblud’s video for the single Strawberry Lipstick, where she pulls the rockstar around on a dog leash and in the most punk-rock fashion, rips into a raw heart. It’s speculated that the video may be where feelings first began to surface for the pair, as they both shared spicy behind-the-scenes pics to their social media pages.

The rumour mill went into overdrive when Yungblud was pictured with Miley Cyrus during a night out in Los Angeles. Various tabloids reported Cyrus was “sucking” on the musician's finger, however, she quickly maintained that they are “just friends.”

In a perfect exchange, Yungblud also lent his creative talents to Jesse Jo Stark’s music projects. Per NME, the multi-talented musician shot artsy polaroids for Stark’s haunting single, Die Young, and sees Stark in the bath with running mascara. Stark told NME: “This picture makes me feel like I have nothing to hide – it’s raw, messy and true.”

By summer 2021, Yungblud and Jesse Jo Stark are official — well, Insta-official at least. The evidently happy couple have shared numerous photos of themselves together with gushing captions. "Lovin you," Stark commented on one of her Instagram posts, also writing in another "baby love."

Posting to TikTok in July 2021, artist Scribblefrog revealed their custom artwork on a guitar commissioned by Yungblud to give to girlfriend Stark.

In a recent interview, Yungblud spoke about the impact of the heartbreak on his new music and how he’s moving forward from assumedly his public break-up with musician Halsey back in 2019.

"I never write love songs, man. I grew up in quite a violent home,” he told People magazine, adding “And I was like, 'If that's love, I don't want any f—ing part of it."

He added: "But then I met someone who completely changed my world inside out and upside down and made me go, 'Oh my God, this is what it feels like to be loved. This is insane.'"

The PDA has been strong between Yungblud and Stark, especially on TikTok. In a video shared to the app, the couple ceremoniously broke open Yungblud’s padlock necklace, before Stark helps him lock on a brand new inscribed chain. In the romantic clip, he’s seen handing over Stark the key, and the caption reads “Loves not dead.” In another video on TikTok, which has more than 2 million plays, Yungblud surprises Stark with a huge bouquet of roses before they share a kiss.

More like this
Gemma Atkinson & Gorka Márquez Are Strictly The Sweetest Couple
By El Hunt
Rita Ora Finally Opened Up About Marrying Taika Waititi & Their "Perfect" Wedding
By Sophie McEvoy and Catharina Cheung
Here’s How You Can Watch The Grammys 2023 In The UK
By Emma Madden and Catharina Cheung
Twitter Is Saying The Same Thing About Beyoncé's Renaissance World Tour
By Shahed Ezaydi
Get The Very Best Of Bustle/UK
Sign up for Bustle UK's twice-weekly newsletter, featuring the latest must-watch TV, moving personal stories, and expert advice on the hottest viral buys.