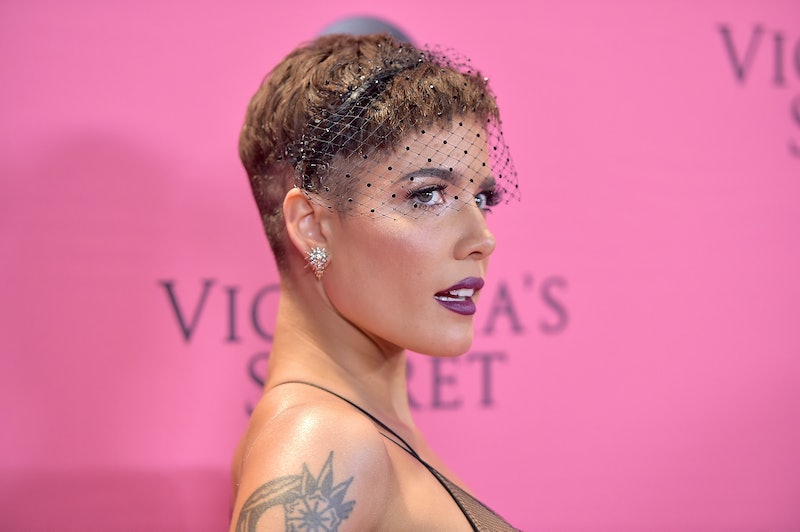 Once you've gone Instagram official, the next step for a celebrity couple is to take things to the red carpet. And seeing as how Halsey has a new man in her life, this year's Teen Choice Awards would be the perfect time for them to make their debut. Who is Halsey dating in 2019, though, you wonder? Well, for starters, it's not G-Eazy. That ship sailed earlier at the end of last year. However, the guy she's dating now is *also* in music, and they seem like they're a really good match.

Over the past couple of years, Halsey was in an on-again, off-again relationship with rapper G-Eazy. The pair even recorded the smash hit, "Him & I" together, and always looked pretty loved-up whenever they were together. After a few breakups and make-ups over the course of last summer, they split for good in October 2018.

About a month after she and G-Eazy went their separate ways, Halsey was spotted leaving the studio with British rap-rocker Yungblud (whose real name is Dominic Harrison). In the pics snapped by E! News at the time, you could definitely tell there was at least a little bit of chemistry between the two. She was carrying a bouquet of flowers, and they were like, totally looking longingly into each other's eyes.

Despite how things appeared, neither one of the stars would flat-out confirm that they were romantically involved over the next few months. They were clearly spending a ton of time together and would even go on to collaborate on a track with Travis Barker titled "11 Minutes" — the video for which includes some super sweet and steamy moments between the two.

Halsey kind of, sort of hinted that they might be an item during an interview with 97.1 AMP Radio in February. The singer revealed that they ended up meeting after she slid into his DMs with her personal number and a single black heart emoji. "I'm 24, he's 21, I'm a cougar, I get it," she joked.

Since then, the paparazzi has snapped a handful of pics of them looking super loved-up. And while they still haven't blatantly said anything along the lines of, "Yes, we're dating," Halsey's birthday post for Yungblud on Instagram pretty much cleared up any confusion.

"darling dom," she started the post, which included several pics of the rocker solo and one final shot of them kissing. "everyone who has met you in this life, for any amount of time at all, will be changed forever because of it. for some, in small ways they won’t even realize," she continued. "you leave an irrevocable shine on every soul you come in contact with. mine is gleaming. happy birthday, I love you," she added.

"I love you," Yungblud simply replied in the comments of Halsey's post. So, yeah, after that, it's pretty safe to say that they're definitely, officially a couple.

So, will Halsey and Yungblud make their relationship red carpet official at the 2019 Teen Choice Awards on Aug. 11? Fans will have to wait and see. They sure are cute together though, aren't they?