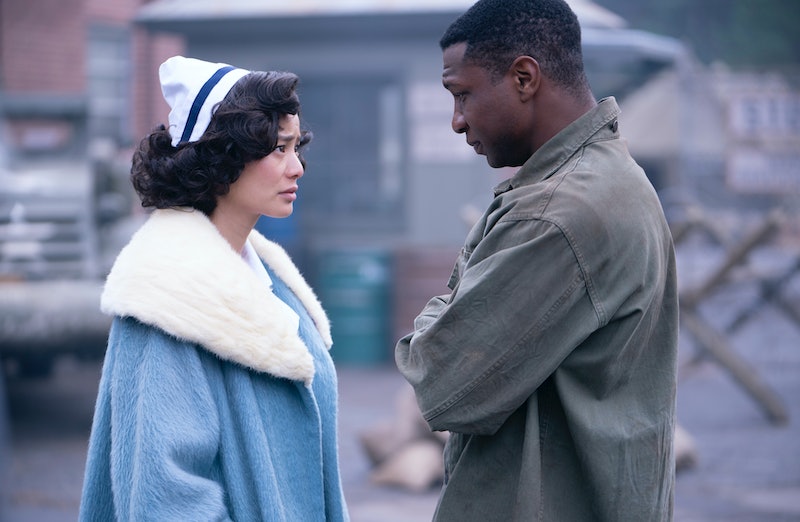 The episode opens on Ji-Ah and her mother Soon Hee (Cindy Chang) a short time before the start of the Korean War in 1950. Soon Hee reprimands Ji-Ah for not bringing home a man. At first it seems like they're running a brothel and need money to survive the winter, but the truth reveals itself in truly horrific fashion when Ji-Ah comes home with Byung Ho (James Kyson). Just as Byung Ho climaxes inside Ji-Ah, hairy looking tentacles grow out of every orifice on her face and destroy his body in a bloody explosion.

Later, Tic arrives in Korea with the American troops; Ji-Ah and Tic fall in love, but eventually Ji-Ah's true nature is revealed to him, too. Tic flees, but not before Ji-Ah tries to warn him that she foresaw his death, and that despite being a monster, she loves him. It's not clear if or how we'll ever see Ji-Ah again, but her story helps to fill in a few gaps — and raises some new questions.

The most surprising reveal of the episode is that Ji-Ah is a kumiho. Per KBS World Radio, a kumiho (sometimes spelled gumiho) is a fox spirit with nine tails that appears in Korean mythology. The kumiho often transforms itself into a beautiful woman, and its main desire is always to become human. The way this happens varies by the source material. Some say a kumiho simply has to wait 1,000 years, while others say she has to eat the livers of 1,000 men or — oppositely — resist killing men for 1,000 years. Some legends also say a fox spirit is able to absorb the memories and knowledge of the humans they eat, as Ji-Ah does.

Lovecraft Country does take some liberties, though. Ji-Ah's tails sprout from her face rather than her back, and the fox spirit was summoned into Ji-Ah's body to protect her from Soon Hee's husband; it's implied she destroyed the daughter's soul, and is now merely inhabiting her body. While Ji-Ah enjoys looking human, she makes it clear that she doesn't really want to be human.

Tic's a reserved protagonist who always seems to have a lot on his mind, and in Episode 6 we finally see why. As a lowly private in the army, he bore witness to and carried out a lot of horrific orders, including the execution of Ji-Ah's coworkers and the torture of her best friend. It's a critical look at America's imperialism that also adds new dimensions to Tic's character. His experiences seem to confirm everything that Montrose feared would happen: that Tic would go off to fight for a country that doesn't respect him and be left only with trauma in the end.

Another reason Tic appears so pensive in Episode 1 is likely because Ji-Ah was Tic's first love, and he left her behind in Korea without an official goodbye. When Ji-Ah first spots Tic at her hospital, she formulates a plan to kill him and absorb his soul as revenge for her friend's death. But when Tic nervously explains that he's a virgin and has never felt so strongly for someone on their first date, Ji-Ah softens to him. The two instead have normal, non-terrifying tail sex, continuing a relationship for at least a year.

Though Tic ultimately leaves Ji-Ah, it's clear she's still constantly on his mind, as he dreams of her and calls her in earlier episodes. This brings up the question of Leti: Tic seems to have a genuine love for her, but is it possible their relationship happened so quickly because Tic was rebounding from Ji-Ah? And if Ji-Ah were to show up on his doorstep, would he remain with Leti?

Of course, the reason Tic ran away from Ji-Ah is because she finally revealed her true nature to Tic during sex. In a moment of pure bliss, Ji-Ah slips up, and her tails come out and immediately latch onto him. She throws Tic off of her unharmed, but the damage is done; he sees his girlfriend is a hideous monster and flees.

This means that at the start of the show, Tic already knew that monsters exist. It doesn't make the vampiric monsters in the forest any less terrifying, but it does suggest that Tic has had much more time to think over and compartmentalize paranormal terrors than Leti and Montrose have.

What Do Ji-Ah's Visions Mean?

Ji-Ah's kumiho powers allow her to absorb a man's memories as she's killing him, and when she's connected to Tic, we get a whole barrage of new information. We see how Montrose used to beat Tic, but we also see events that haven't happened yet. Tic appears to sleep with a woman who isn't Leti, and Ji-Ah sees him strapped into a device that appears to kill him.

It's not yet clear how Ji-Ah is able to see the future through Tic's eyes, as she was very clear to Soon Hee that she could only absorb memories. Alternatively, is Lovecraft Country gearing up to pull a Westworld, and reveal that all of those events have already happened? With the intermingling of ancient lore with ghosts and magic, it's honestly really hard to tell where the story could go.

Maybe? It feels like overkill to write out the main protagonist after George (who is alive in the Lovecraft Country book) died, but showrunner Misha Green's focus seems to be on the female characters anyway. Before Tic runs off, Ji-Ah begs him not to return to America because she's convinced it will set his death into motion — and maybe it has. After the major showdown at Ardham Lodge in Episode 2, we still don't know the extent of Christina Braithwaite's powers and what she's planning to do.

The episode also ends on a major cliffhanger, with Ji-Ah asking a shaman if Tic's death is imminent. This hints that Ji-Ah is working to prevent that future from happening, which means we may see her appear in America in future episodes. Will Ji-Ah succeed in saving him, or will the future ultimately remain immutable?