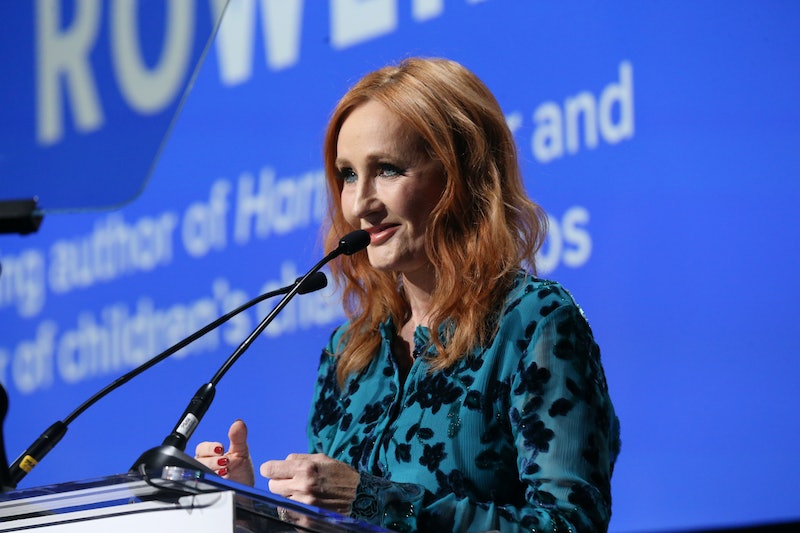 It's been just over three months since J.K. Rowling's latest Twitter scandal. Now, the Harry Potter author is back in the news with her new novel, which spews transphobic talking points about men in dresses. In spite of the fact that trans people in the UK "are twice as likely to be victims of crime as cisgender people," according to The Guardian, Rowling has created a villain who embodies a real-life argument against trans equality: a cis man who dresses up in feminine clothing to harm women and girls. Here's everything we know about J.K. Rowling's controversial new book.

Troubled Blood is the fifth installment in Rowling's Cormoran Strike series, published under the pseudonym Robert Galbraith. At 900 pages, the book is twice as long as its predecessors, but that's not what has people talking. Coming fast on the heels of Rowling's recent dispute with LGBTQ+ activists and allies, Troubled Blood features Dennis Creed: a cis serial killer who disguises himself as a woman in order to gain access to his victims.

Rowling's characterization of Creed draws from the same unfounded fear that pervaded her June 10 blog post: a 3,690-word screed that suggested trans women and girls posed a threat to cisgender women and girls in bathrooms, which we will not link to here. Her disappointing behavior shouldn't surprise anyone who has been paying attention to her online presence. The author, who has drawn criticism for her depictions of people of color and Native American religion and culture, has a long history of transphobic Twitter behavior.

Let's look back to 2018, when the Harry Potter author favorited transphobic tweets, including one that called trans women "men in dresses." Although her representatives blamed the Twitter engagement on a "clumsy and middle-aged moment," fans knew that Rowling had previously "liked a tweet that linked to a Medium piece full of vitriolic speech targeting trans women," according to Refinery29.

In December 2019, Rowling tweeted her support for Maya Forstater: a UK woman who was fired for her transphobic tweets. Rowling erroneously characterized the response to Forester's abhorrent rhetoric as "forc[ing] women out of their jobs for stating that sex is real."

Earlier this summer, Rowling liked a tweet stating that "[h]ormone prescriptions are... [p]ure laziness for those who would rather medicate than put in the time and effort to heal people’s minds" — a statement that denigrates people who take medications to treat mental illness, while also playing into the harmful stereotype that depicts people with gender dysphoria — which many, but not all, trans people experience — as mentally ill. She later wrote a lengthy blog post defending her views.

In September, Rowling tweeted out a promotion of a UK store that has a whole category of transphobic — aka "gender critical" — merchandise on their website. The selections there include pins, coffee mugs, and other accessories bearing transphobic phrases, such as "transwomen are men" and "f*ck your pronouns."

The Harry Potter author encouraged her 14.2 million Twitter followers to buy from that specific business, and not "from cynical chancers," throwing in the #supportwomanrunbusinesses hashtag for good measure.

The trans community has long criticized the "man in a dress" punchline, which — intentionally or not — sets up trans women as objects of ridicule. The trope has taken on new meaning in recent years, as trans-exclusionary radical feminists (TERFs) and other transphobes have launched campaigns promoting "bathroom bills" that prevent anyone from using a restroom that does not align with the gender they were assigned at birth.

Today, the "man in a dress" is a shadowy political fiction. He's a bogeyman: a cis man who dresses up in feminine clothing in order to follow girls and women into bathrooms and sexually assault, kidnap, or murder them. Rowling's new serial killer embodies these transphobic talking points. And choosing to write a "man in a dress" villain at a time when trans people are routinely victimized is highly disappointing. Unfortunately, this isn't the first time Rowling has written a transphobic character description.

When they first encountered the Harry Potter books, fans probably didn't notice that Rowling's depiction of Rita Skeeter in her YA series coded the character as trans. Harry Potter and the Goblet of Fire describes the minor antagonist as having a "heavy-jawed face" and "large, mannish hands" with "thick fingers" and "a surprisingly strong grip." Rita's also an unregistered animagus who hides her ability to transform into an insect in order to spy on children and other subjects, and she fears being outed as such. Deceit is her primary character trait, which, combined with Rowling's masculine coding of her hands and face, makes Rita into yet another walking stereotype — that of the trans person who deceives others with their very existence — one that has largely flown under the radar in a book for children.

If you think it's a reach to label Rowling's depiction of Rita Skeeter as trans coding, consider her description of Pippa Midgely in the second Cormoran Strike novel, The Silkworm. She's deadnamed in her encounter with Strike, who zeroes in on her Adam's apple and the way she keeps her hands hidden in her pockets. Strike later threatens Pippa with a rape joke, saying that jail "won’t be fun for you Pippa.... Not pre-op."

Pippa hides her identity as a trans woman by keeping her hands in her pockets as much as possible. She's different from Rita, who has no problem shaking hands with her fellow witches and wizards, but still part of a strange trend in Rowling's writing — that hands can somehow reveal whether or not a person is transgender.

The Silkworm also features a brief conversation in which Strike and his assistant, Robin Ellacott, discuss the possibility of a killer — who "[c]ould've been a man" — using a burqa to disguise themselves while committing a crime. It's hardly a Dennis Creed scenario, but it just goes to show that the idea of the villainous "man in a dress" has been on Rowling's mind for some time.

Her Pseudonym Resembles The Name Of An Anti-Gay Psychiatrist

Most Harry Potter readers know that Rowling is the publicly used pen name of Joanne Rowling — no middle name, but the "K." comes from her grandmother, Kathleen. Many could probably tell you that Rowling also publishes crime fiction for adults as Robert Galbraith. But few probably know about the other Robert Galbraith, Dr. Robert Galbraith Heath, whose impact on the queer community cannot be understated.

Heath was an academic and researcher who founded Tulane University's Department of Psychiatry and Neurology and served as its chair for more than 30 years. In 1970, Heath laid the foundation for conversion therapy: the abusive "gay cure" that continues to traumatize LGBTQ+ individuals to this day.

Rowling claims there is no connection between her pen name and Heath.

We Need To Talk About Her Most Egregious Statement

Rowling made what is perhaps her most disturbingly transphobic statement this summer, when she made fun of a gender-inclusive headline that said "people who menstruate." Taking issue with the author's rhetoric — which includes some trans men and non-binary people in conversations about menstruation — Rowling later claimed that "erasing the concept of sex removes the ability of many to meaningfully discuss their lives." In the same Twitter thread, she insinuated that trans people do not face discrimination, saying: "I'd march with you if you were discriminated against on the basis of being trans."

That tweet came just weeks after new research published in the Journal of Adolescent Health showed that "29.7% of trans and non-binary youth [in the U.S.] said they had been physically threatened or harmed" in the last year. Additionally, "82.8 per cent reported a depressive mood, 54.2 per cent had seriously considered suicide, and 28.6 per cent had attempted suicide," making trans and non-binary young people "more than five times as likely than non-LGBT+ youth to attempt suicide."

Across the world, the trans community is vulnerable to discrimination in housing, employment, and health care. The Human Dignity Trust, a UK organization that "work[s] globally to challenge laws that persecute people on the basis of their sexual orientation and/or gender identity," reports that 15 of the world's 195 countries have laws that "criminalize the gender identity and/or expression of transgender people, using so-called ‘cross-dressing’, ‘impersonation’ and ‘disguise’ laws." In addition, 26 countries have "laws designed to preserve public order," which are used to target trans people, according to the Thompson Reuters Foundation, and sodomy laws in 70 countries could be used to penalize heterosexual trans couples.

Rowling's decision to repeatedly depict trans people as deceitful is not only malicious, but also plays into an absurd narrative with no basis in fact. The idea that trans people lie about their identities takes the No. 1 spot on Vox's 2018 list of myths about trans people, where author German Lopez describes it as "a problem not just because trans people’s testimonies and available scientific evidence show it’s wrong, but because it also feeds into some of the discrimination trans people face."

Furthermore, there is no evidence to support the idea that allowing trans people into the bathrooms and locker rooms of their choosing will endanger the lives of others. There is no reason to think that a woman in a burqa is threat to your life and property, or that a trans journalist will spy on you and make up lies about you for her readership. And the only reason to read a trans woman as a "man in a dress" is if you're bound and determined to cling to relatively recent and regressive ideas about gender.

What Comes Next For Rowling

Will Rowling's transphobic rhetoric tank her career? Only time will tell.

It's already begun to have a material effect on those who associate with her. According to Variety, editorial staff at Rowling's UK publisher were not allowed to opt out of working on her new children's book, The Ickabog. Four writers previously represented by The Blair Partnership — which also represent Rowling — have severed ties with the agency in an open letter, citing "Rowling’s public comments on transgender issues" and the failure of The Blair Partnership to "reaffirm their stance to transgender rights and equality."

Rowling's legacy has been tainted for many, including her longtime fans, but the future is hazy for the author. What's clear now is just how difficult she's made it for fans to excuse her views as anything other than toxic and harmful.