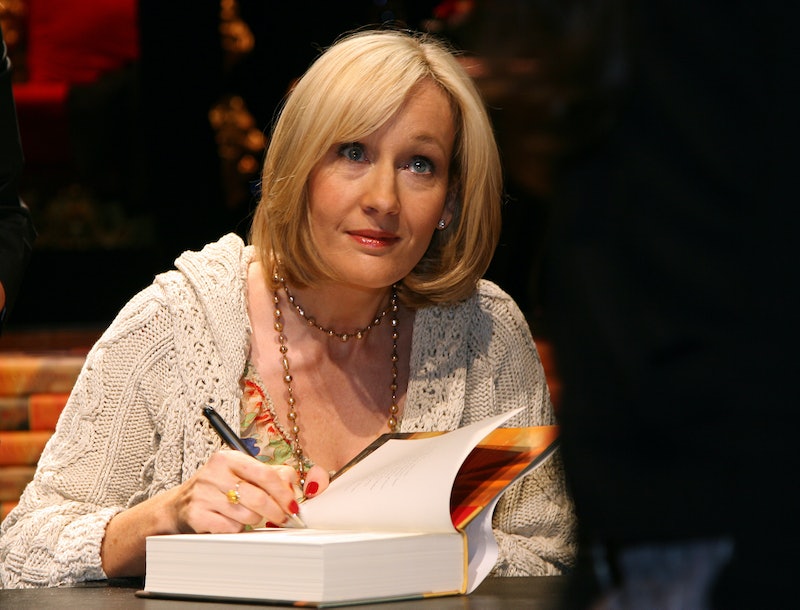 In light of J.K. Rowling's recent transphobic tweets and essay, another facet of her career is taking on a brand new meaning for fans. It turns out that J.K. Rowling's pseudonym has a disturbing anti-LGBTQ connection, and fans are asking for answers.

In 2013, Rowling released The Cuckoo’s Calling, which would end up being the first novel in a four-book saga, under the pen name of Robert Galbraith. Now, in light of her recent controversy, fans on Twitter are noting that the pseudonym also happens to be the name of a harmful conversion therapist, Robert Galbraith Heath. Heath, a mid-20th century psychiatrist, pioneered a range of practices that would later become known as conversion therapy, controversially used to attempt to "cure" gay people of their same-sex attraction. According to Mosaic Science, he claimed to have successfully "cured" a patient of homosexuality in 1970. And while there have been no previously reported links between Rowling and Heath, her recent comments on transgender rights have inspired fans to look a bit more closely into the author's past choices.

The author, however, denies any connection to Heath. "J.K. Rowling wasn't aware of Robert Galbraith Heath when choosing the pseudonym for her crime novels," a spokesperson for Rowling told Bustle when asked about the name. "Any assertion that there is a connection is unfounded and untrue."

In fact, Rowling has explained why she chose the pseudonym before. According to Robert Galbraith's author website, she coined the moniker by combining the first name of the late Robert F. Kennedy with "Ella Galbraith," a name that she said she made up for herself and wanted to be called during childhood. "I don’t even know how I knew that the surname existed, because I can’t remember ever meeting anyone with it," she wrote on the site in 2014. "Be that as it may, the name had a fascination for me."

Considering her passionate stance on the importance of biological sex, which includes supporting same-sex relationships, it's possible that Rowling simply wasn't aware of her pseudonym's dangerous history. But given her transphobic remarks, it's also not hard to see why this coincidence is coming under increased scrutiny.

More like this
Alan Rickman's Diary Reveals Why He Considered Leaving 'Harry Potter'
By Darshita Goyal
Everything You Need To Know About ‘Black Panther: Wakanda Forever’
By Bustle Editors
Lin-Manuel Miranda & Tituss Burgess React To 'Little Mermaid' Casting Backlash
By Radhika Menon
A New Scooby-Doo Movie Confirmed Velma Is Gay & Twitter Is Pumped
By Radhika Menon
Get Even More From Bustle — Sign Up For The Newsletter