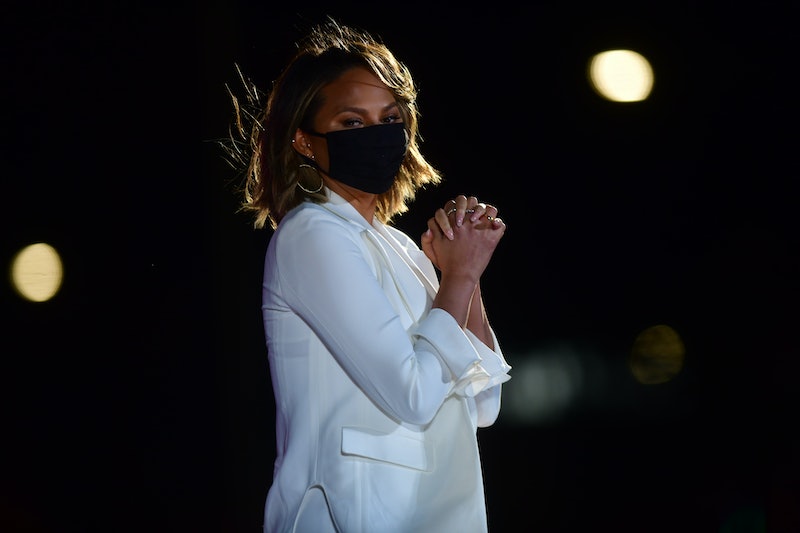 The saga started on the morning of Jan. 20, before the inauguration, when Teigen tweeted Biden's non-government account @JoeBiden and requested that he follow her on Twitter — mainly because Donald Trump blocked her for his entire term. "Hello @joebiden I have been blocked by the president for four years can I get a follow plz," she wrote. Evidently, Biden (or at least someone on his social media team) took note of Teigen's request and felt enough sympathy to grant it. And apparently, she didn't even get the notification.

Teigen found out through another tweet that tagged her, and promptly quote-tweeted the news with excitement, simply writing "OH MY GOD," complete with many exclamation points. In a follow-up tweet, Teigen rejoiced in the fact that she could finally see the President's tweets — at least through her own account, for once. "My heart oh my god lmao I can finally see the president’s tweets and they probably won’t be unhinged," she wrote.

What's most notable about this is that Teigen is the only celebrity that Biden follows on his @POTUS account. Otherwise, @POTUS only follows Biden's aides and family, including wife Dr. Jill Biden on her @FLOTUS account and Vice President Kamala Harris on the @VP account. Time will tell if other stars will eventually join the ranks of Teigen — perhaps inauguration performers Lady Gaga and Jennifer Lopez are next?

However, the one downside that comes from @POTUS now following Teigen is that she'll have to be more careful about what she posts on Twitter. She also knows this, suggesting in a separate tweet that "I should prob never tweet again." Let's hope she's simply being her sarcastic, joking self.