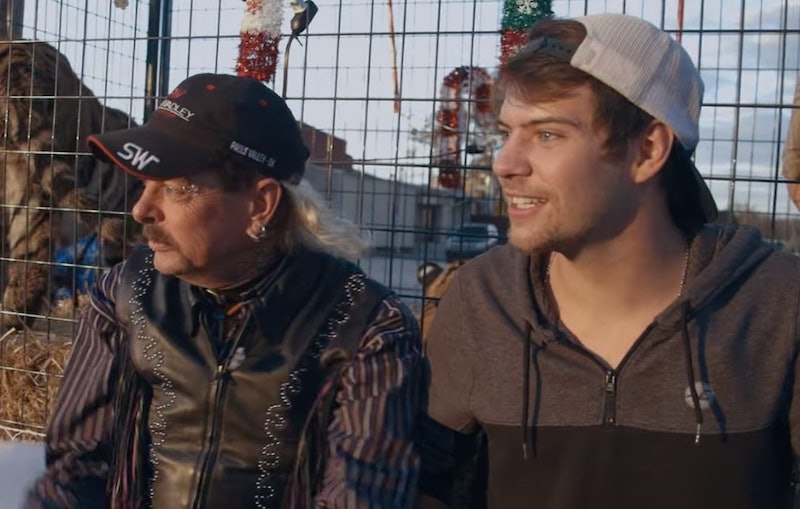 When Tiger King premiered in March 2020, Joe Exotic was still married to Dillon Passage. The two wed in December 2017 two months after the tragic passing of Exotic’s previous husband Travis Maldonado. Nine months later, Exotic — whose real named is Joseph Maldonado-Passage — was arrested for allegedly orchestrating a failed murder-for-hire plot against animal rights activist Carole Baskin. He’s currently serving a 22-year prison sentence for that and 17 other crimes, including charges in relation to trading illegal wildlife, though he has maintained his innocence.

“It’s something that is a day-to-day thing,” Passage told People in June 2020 of his marriage to Exotic while in prison, admitting that he didn’t get to speak to his husband very often. “It’s kind of my normal life now. It’s kind of weird to say, but I’ve kind of gotten used to our situation.”

By March 2021, however, their relationship had taken a turn. In an Instagram post, Exotic revealed that he and Passage had separated after three years of marriage. “Dillon thinks having to sleep alone and not have me out there is so rough and hard to deal with to the point he has to leave me. Now I don’t even have a home,” he wrote in part. “All I ever wanted was to mean something to someone. Why is that so much to ask?”

Passage commented on the post that he would “much prefer to handle personal matters personally, and not on social media.” However, Passage shared his own post the following day. “To answer the main question the public wants to know, yes, Joe and I are seeking a divorce,” he wrote in part. “This wasn’t an easy decision to make but Joe and I both understand that this situation isn't fair to either of us.”

Despite the breakup, Passage insisted that he and Exotic were taking it “day by day” and were “still on good terms.” He added that he would continue to have Exotic in his life and do his best to “support him while he undergoes further legal battles to better his situation.”

One day later, Exotic’s lawyer Francisco Hernandez told Us Weekly that the couple had chosen to pause their divorce proceedings, explaining that Passage and Exotic had “decided they will stay married right now so things don’t get complicated” after speaking on the phone.

Prior to the divorce drama, Passage revealed that Exotic had suggested they have an open marriage while he was incarcerated. “But he said, you know, ‘If you ever find somebody that is important to you and you think that you need to move on, I’d be OK with letting you do that,’” Passage told Us. During the summer of 2021, that seems to be exactly what happened. In a July 8 Instagram post, Passage introduced his new boyfriend John. He explained to his followers that he’d planned on keeping the relationship private “for personal reasons,” but that he’d recently been “having a hard time dealing with things happening in [his] life” and wanted to pay tribute his “special special man” for being the “rock” who has been helping him cope.

Since then, Passage and Exotic’s relationship has soured. In an Aug. 9 Instagram Live, Passage claimed that Exotic had cut him off after years of “manipulation and emotional and mental abuse.” He alleged that Exotic used to “lash out” at him if he didn’t answer his phone calls, and even began doxxing his family members. In response, Passage said he moved to Denver without telling Exotic, who eventually tracked him down. According to Passage, Exotic sent followers and a reporter to his new home, and began calling the bar where he worked so frequently that he was eventually fired.

Passage also claimed in the video that Exotic began controlling him early on in their relationship, explaining that he was “not allowed to have any friends at the zoo” or leave the property except to go to the gym or grocery store. “I started to feel and realize that I was yet another animal in a cage for Joe to control,” Passage said of his ex, though he still referred to him as a “good man” and said he’d given him $180,000 over the course of three years.