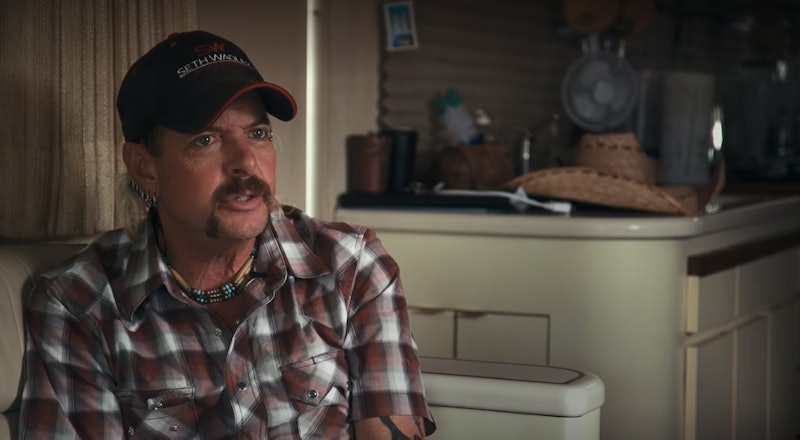 The bonkers new Netflix series Tiger King: Murder, Mayhem and Madness opens with a call from Joe Exotic — aka Joseph Maldonado-Passage — placed from inside an Oklahoma jailhouse. “Let me show and tell the whole thing because then you’ll get it,” he promises. “Then you’ll say, 'Jesus f*cking Christ, why are you in jail?'” What follows is a seven-episode saga that culminates with the big cat fanatic being charged for hiring someone to murder Carole Baskin, the founder of a big cat rescue organization. But the answer to why exactly Joe Exotic is behind bars now is a little more complicated than that.

On January 22, the former zookeeper was sentenced to 22 years in federal prison for a conviction that included the two counts of murder-for-hire well-documented in Tiger King, but also 17 other crimes. Eight of those counts pertained to violations of the Lacey Act, a century-old conservation law that prohibits trade in illegal wildlife. In particular, Maldonado-Passage was held responsible for allegedly falsifying delivery forms and vet inspections for tigers, lions, and a baby lemur. The doctored forms reportedly indicated the animals were being donated or publicly exhibited across state lines when really they were being sold. In one instance, Maldonado-Passage was charged with selling a lion cub just two weeks after birth.

Perhaps more chilling than the Lacey Act violations were the nine violations of the Endangered Species Act the jury heard. According to the indictment, Joe Exotic shot and killed five tigers in 2017 to make cage space for his other big cats. He also allegedly violated the ESA by illegally selling tiger cubs, which have been an internationally protected species since the 1970s.

Despite Maldonado-Passage's professed love of big cats, the wildlife crime convictions echo concerns raised in a 2011 Humane Society investigation into his commercial animal park. Back then, a caretaker alleged "hundreds of animals — most of them dangerous exotics such as tigers, lions, bears, chimpanzees and other primates — are caged in barren conditions, bred to provide infant animals for public photo shoots and 'play time' sessions and often cared for by workers who have little-to-no experience." The caretaker further claimed that baby tigers were whipped as part of their training and that visitors to the zoo were reportedly bitten by the animals.

Each individual Lacy Act violation is punishable with up to five years in prison. Each ESA conviction can carry an additional one-year sentence. And while Joe Exotic still contests his imprisonment, his 22-year sentence is significantly shorter than the maximum he faced.

Since the release of Tiger King, Maldonado-Passage has filed a lawsuit, as reported by TMZ, asking for $94 million from the U.S. Fish and Wildlife Service and a presidential pardon from Donald Trump. While the docuseries about his zoo and alleged crimes concluded with just seven episodes, it's clear that Joe Exotic's story is far from over.