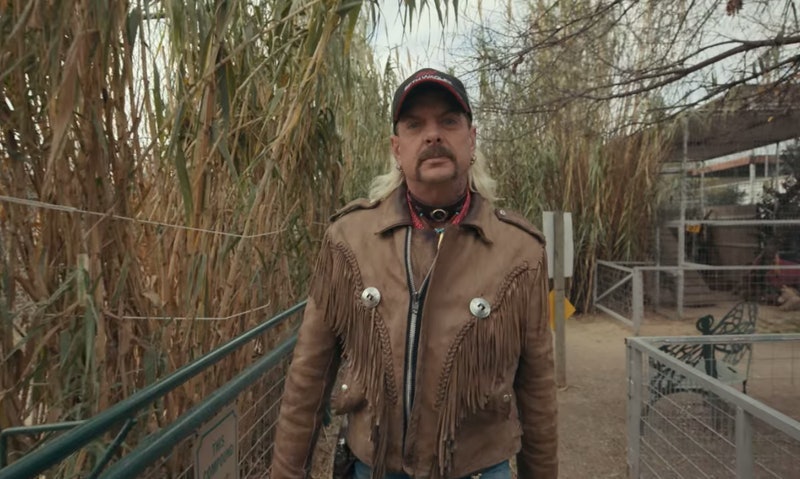 He may be serving a 22-year prison sentence, but that hasn’t stopped Joseph “Joe Exotic” Maldonado-Passage from dating. In Tiger King 2, he reveals that he has a new boyfriend named Seth, who he describes as a “drop f*cking dead gorgeous” man living in Arkansas. “I’ve never met Seth, but we talk 15 times a day, and we have a pretty strong connection,” Exotic says on a phone call from prison.

In screenshots featured in the series, Seth introduced himself on Joe’s Instagram account, writing that he’s not “a big social media person” and wants to keep his own account private because he’s “not ready to deal with all the following that comes with being in love with Joe.” He also assured fans via that he’s “real,” in a relationship with Exotic, and in full support of his boyfriend’s fight to appeal his sentence. “I talk to him 5 times a day or more and he sends his love to every one of you,” Seth added, in part.

However, it appears the two have since broken up because Seth’s posts — which included several shirtless selfies — have been deleted from Exotic’s Instagram account.

Exotic’s new relationship follows his contentious divorce from Dillon Passage, who he married in 2017 just two months after the tragic passing of his previous husband Travis Maldonado. Passage announced their breakup on Instagram in March after three years of marraige. “This wasn’t an easy decision to make but Joe and I both understand that this situation isn't fair to either of us,” he wrote. Passage — who’s now in a relationship with a man named John — initially insisted the split was amicable. However, he later detailed Exotic’s alleged “manipulation and emotional and mental abuse” during an Instagram Live in August.

“I started to feel and realize that I was yet another animal in a cage for Joe to control,” Passage said of his ex, asserting that he did not “deserve to suffer in a relationship” where he’d been “belittled and torn down” over the years. “I feel so happy now that I’ve finally relieved myself of Joe.”

Following the divorce announcement, Exotic launched a “Bachelor King” contest to find a new husband on July 8. A press release on Exotic’s website notes that the competition is open to men over 18 years old who are interested in being the "next romance in Joe's new life." The top three men chosen will be given a four-day, three-night all-inclusive paid getaway with Exotic once he's been released from prison.

“I have been through hell in three years and I intend on making my new life something I have always dreamed of and I want to spend it with someone that can take a relationship serious and be in love and enjoy this ride, and make this about us as a team, not just me or the man I choose to carry on with,” Exotic said in a statement. “I want to share this with someone great.”

Only time will tell if Exotic can find that special someone, but if he serves the entirety of his original 22-year sentence, the 58-year-old won’t be released from prison until 2042.

More like this
Love Is Blind’s Natalie Claims Shayne Signed Up For 'Perfect Match' While They Were “Still Together”
By Brad Witter
Joey Essex Is Rumoured To Be Dating A 'Love Island' Favourite
By Sam Ramsden
10 Photos Of The Wildest Limo Arrivals From 'The Bachelor' Premiere
By Brad Witter
Brittany Snow Files For Divorce From Tyler Stanaland After 'Selling The OC' Drama
By Grace Wehniainen and Radhika Menon
Get Even More From Bustle — Sign Up For The Newsletter
From hair trends to relationship advice, our daily newsletter has everything you need to sound like a person who’s on TikTok, even if you aren’t.