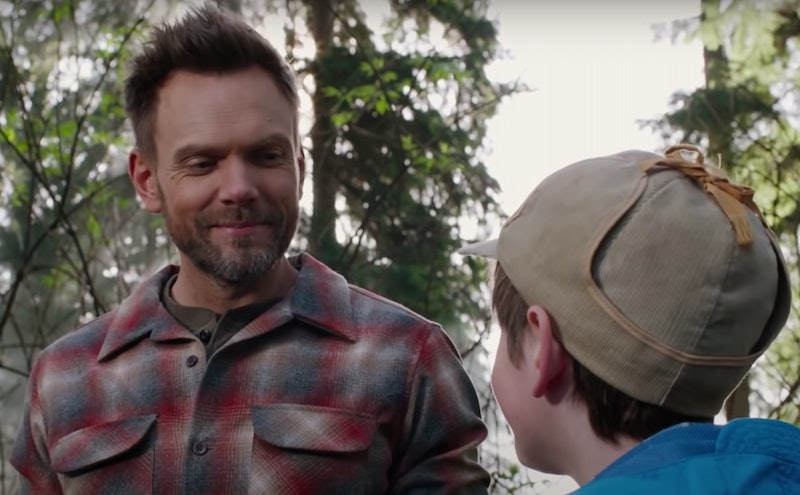 Spoilers ahead for Psych 2: Lassie Come Home. Joel McHale's Psych character was such a big secret, not even star Timothy Omundson knew about it. He was aware that they'd cast the part — McHale plays the father of Omundson's character, Police Chief Carlton Lassiter — but they refused to tell him who was playing the role.

"I obviously wanted to know who [it was] because the character was so important. I kept bugging everybody, 'Who's playing my dad?'" Omundson told TV Insider. "They went through incredible lengths to keep it hidden from me. I still to this day can't believe it." It wasn't until they were all on set that Omundson learned the truth. They even put a fake name on the call sheet to trick him.

"I looked this actor up and found no IMDb credits," Omundson said, adding that Psych creator Steve Franks had lied and said they'd cast a local newcomer. "Then Joel walks in," Omundson continued. "We have this moment recorded on video, and it's the biggest belly laugh I'd given since my stroke, just one of the greatest surprises in my life."

Omundson is actually friends with McHale, which made the surprise all the more shocking. "The fact they kept it [secret] so long, that was amazing," Omundson told TV Insider. He added that he thinks McHale was the perfect person to play Lassiter's dad. "[He's a] big, tall, strapping, strong character of a man, which I think is what Lassiter grew up emulating."

The movie opens on a flashback of a young Lassiter in the woods with his father, learning about how all Lassiter men can grow great beards. Slowly, the flashback turns into a dream that present-day adult Lassiter is having while in a special care facility, where he's recovering from a stroke he experienced after being shot. In his dream, his dad implores him to remember why he was in the building where he was shot in the first place.

Throughout the movie, Lassiter's dad returns to him in these types of visions in order to help Lassiter unlock his buried memories and push through his recovery. "To have this dad appear back at his side and support him was a really lovely beat those guys wrote," Omundson said of the movie's writers.

Considering that Psych 2 is the first time fans really learned anything about Lassiter's dad, it's a sweet touch that McHale's casting was so meaningful to Omundson — once he learned about it, that is.

More like this
Hallmark’s The Way Home Is Like 'This Is Us' Meets 'Back To The Future'
By Grace Wehniainen
Here’s Everything Coming To & Leaving Netflix In February
By Jake Viswanath
The 'New Amsterdam' Series Finale Opens An “Unexpected” Door To The Future
By Brad Witter
Yes, You Can Stream ‘To Leslie’ In The UK Now
By Sam Ramsden
Get Even More From Bustle — Sign Up For The Newsletter
From hair trends to relationship advice, our daily newsletter has everything you need to sound like a person who’s on TikTok, even if you aren’t.