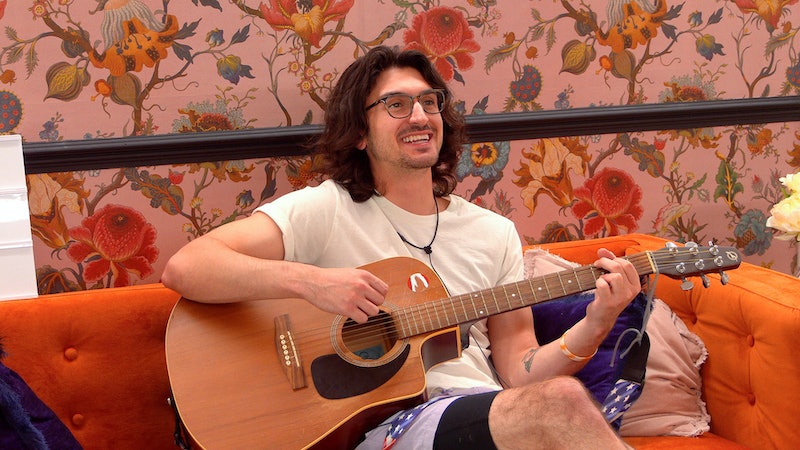 Tom Dymond/Netflix
By Justice Namaste
May 3, 2022

Another season of the Netflix social media reality series The Circle is loading, and with it, a whole new cast of characters and catfishes competing for a sweet cash prize. This season of The Circle will release its 13 episodes over the span of about a month, with four episodes dropping on each of the first three weeks and the final episode, during which the winner will be crowned, dropping on Week 4.

One of this season’s catfishes is John Franklin, a proud Italian-American from New Jersey who decided to appear on the show as his mom, Carol — though we’ll have to wait and see if he’s able to fool his competitors into thinking that he’s the real deal.

John is a 24-year-old from New Jersey who calls himself “as Italian as it possibly gets.” Don’t believe him? Allow him to show you his chest tattoo of Saint Anthony and tell you about being raised in the same town where The Sopranos was filmed (Hoboken, New Jersey). Perhaps he did “grow up in a bowl of sauce.” In addition to his love for his mom, Carol, John appears to be close with his younger sister as well as his cousins.

When he’s not catfishing as his mom on The Circle, John works as a social media content creator, and his specialty appears to be TikTok, where he posts under the handle @johnfranklincomedy. His Instagram bio @_johnfranklin__ confirms that he’s also a comedian, as well as a musician with a Spotify page).

While Carol doesn’t appear on any of John’s social media at the time of publication, fans will surely want to know her take on her son’s impersonation. And, as often happens with catfish, things will inevitably get awkward as John has to keep up the ruse and convincingly play his mother.

As a social media content creator, it’s not surprising that John is pretty active across several social media platforms. In addition to his TikTok account @johnfranklincomedy and his Instagram page @_johnfranklin__, John also has a Twitter account @_johnfranklin_, but he’s less active there than on the first two accounts. He has roughly 3,000 followers on TikTok and 2,400 followers on Instagram at the time of publication — but it’s likely those followings will increase after his appearance on The Circle.

Unsurprisingly, John’s TikToks tend to be, well, comedic. He often posts skits and random thoughts, with video titles ranging from “how the M&Ms got their personalities” to “the first encore” to “ceramics?” As John’s handle would indicate, the page is primarily dedicated to sharing his comedy, though typically he creates that content using sounds, effects, and features of the platform rather than sharing videos of his stand-up shows.

John’s Instagram page, on the other hand, is a bit more on the personal side. In addition to photos with friends and family, he uses his IG account to post flyers for upcoming stand-up sets and musical performances, as well as clips from his stand-up comedy routines. In recent months, John has taken to occasionally reposting his TikToks on Instagram as well.