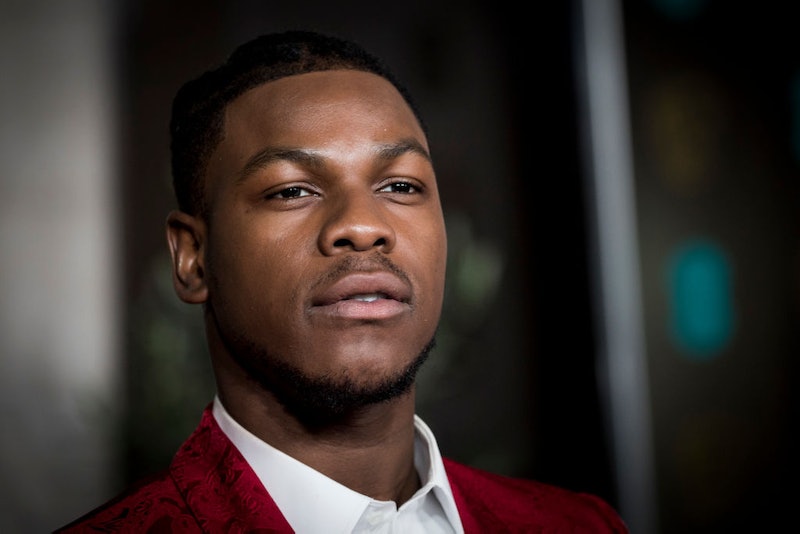 John Boyega has gone from being an up-and-coming star on the UK scene to Hollywood royalty in less than five years. Not only has he starred in one of the most famous film franchises ever with Star Wars, but has also worked with Oscar-winning director Steve McQueen, among many other career-defining moves. But more recently, it's been his activism that has made both headlines and history. His speech during a Black Lives Matter rally in London went viral, and he's used his social media profiles to call out racism on more than one occasion. Speaking for the first time since that Hyde Park address, Boyega opened up about the emotions behind his Black Lives Matter speech.

“I feel like, especially as celebrities, we have to talk through this filter of professionalism and emotional intelligence,” he told British GQ. “Sometimes you just need to be mad. You need to lay down what it is that’s on your mind. Sometimes you don’t have enough time to play the game.”

The plan, he told the magazine, was to “protest quietly”. Together with his older sister, Grace, Boyega mingled anonymously with thousands of protesters in Hyde Park for hours. Speaking was never his plan, but when he reconnected with the BLM organisers who he had been talking to via Instagram earlier that week and they asked if he would be willing to "say a few words" to the crowd "while they waited for the next scheduled speaker," he felt compelled. The rawness came from "looking out into the crowd that day and seeing his own fear and weariness mirrored in the eyes of the other black men present," writes Jimi Famurewa in the October issue, which Boyega is the cover star of. “That just made me cry,” explains Boyega. “Because you don’t get to see that.”

Oscar-winning director Steve McQueen saw the viral speech, too. "I think of myself as a warrior, because I’m all about battles," he told GQ, "but all of a sudden [it was like Boyega] had just taken off his armour and said, ‘Here it is.' It was kind of frightening in a way. You’re thinking, ‘Get your sword up.’ But there’s strength in vulnerability and being naked. He shone very brightly and I rang him a few days after to say thank you.”

Boyega will star in the BBC’s forthcoming Windrush generation saga Small Axe, directed by McQueen. In the series of five films spanning three decades, Boyega plays Leroy Logan, a real person who saw his father be assaulted by the police and later joined the Met in the hope to create change from within.

Speaking about filming the series, Boyega said: “Steve [brought] up things I could relate to and comes with a creative mind like I’ve never experienced before. It reminded me of my happiest days at drama school. Being on set was like I’d been given the chance to breathe.”

Small Axe comes off the back of a very busy period for Boyega. He finished his stint in the Star Wars series as Finn in 2019 whenThe Rise of Skywalker was released. While acknowledging it as a “amazing opportunity” and a “stepping stone”, Boyega does not mince his words about his experience. "What I would say to Disney is do not bring out a black character, market them to be much more important in the franchise than they are and then have them pushed to the side. It’s not good. I’ll say it straight up... Everybody knows. I’m not exposing anything.”

"To dismiss these words as merely professional bitterness or paranoia is to miss the point," warns Famurewa. "His primary motivation is to show the frustrations and difficulties of trying to operate within what can feel like a permanently rigged system. He is trying, really, to let you know what it feels like to have a boyhood dream ruptured by the toxic realities of the world."

You can read Boyega’s full interview with GQ in their October issue or online now.