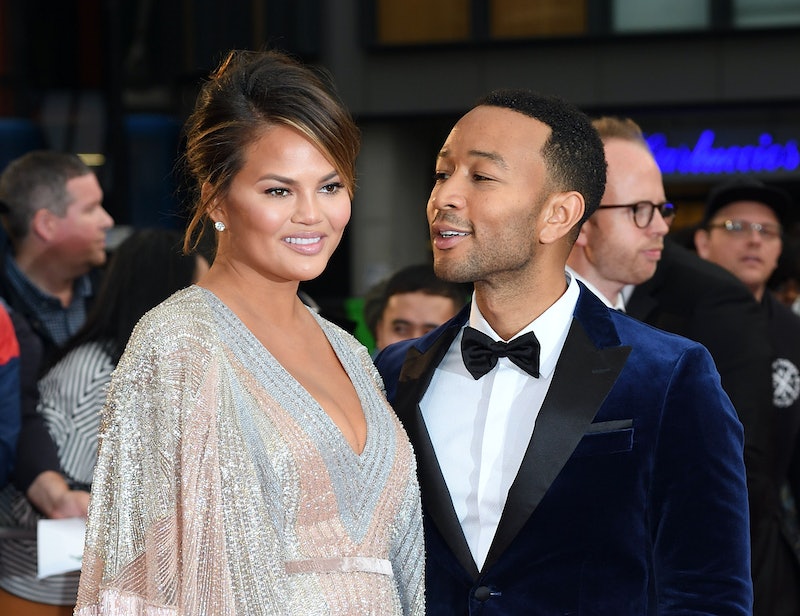 Now the self-proclaimed "King of Valentine's Day," John Legend revisited his love story with Chrissy Teigen in a video on Instagram, calling their romance one "for the ages." On Feb. 14, Legend shared an animated retelling of the couple's origin story, starting with their meeting on the set of his "Stereo" music video. Teigen, who was a model at the time, was brought onto the project to be "flirting and dancing" with Legend, but also because the director thought the two would get along well.

"We had chemistry on the video shoot," Legend explained in the video. "We hung out that night, we stayed in touch over text and over the phone, and would meet up when I came to Los Angeles." The singer went on to tell followers how, much like many who follow the star on Twitter, he fell in love with Teigen's wit. He noted, "I would text her and she would write me the funniest replies."

Legend went on to reveal how his relationship with Teigen grew more serious, saying, "Every time I was away from her, I started to miss her." The EGOT winner added that the two truly fell in love during a "magical trip" to Lake Como near Villa D'este in Italy. At the airport after the getaway, the singer said he reached a realization: "I had fallen in love with Chrissy Teigen." The couple later had a full-circle moment when they recorded a music video for "All of Me," which was written about their love story, on Lake Como before getting married.

The animated short was not the first time Legend got into the Valentine's Day spirit on Instagram. On Saturday, he also shared a '90s-inspired infomercial, joking that the video was a "totally real, not at all staged" ad. Legend created a convincing spoof of a '90s ad for the post, sharing a 1-800 number for a six-CD set that would allow fans to "imagine what it would feel like to own the greatest love songs of all time on a once-in-a-lifetime compilation." He joked that the "dreamy artist" ― himself, of course ― was selling the compilation for "the low price of $29.95."

Also on Saturday, Legend also went live on Instagram for a pre-Valentine's concert, serenading fans in a festive red shirt. Teigen also appeared in the live performance, sitting beside her husband at the piano while he sang and helping him answer fan questions. On Sunday, Teigen also reposted the love story animation on her own Instagram, writing: "Our love story!"

More like this
Chrissy Teigen & John Legend Reveal Their New Baby’s Name & Share First Photo
By Stephanie Topacio Long and Jake Viswanath
Austin Butler Recalls Lisa Marie Presley Showing Him Elvis’ Bedroom
By Jake Viswanath
Jameela Jamil Defends Sam Smith After Trolls Body-Shamed Them
By Jake Viswanath
The Jonas Brothers' New Album Has A Very Meta Name
By Alyssa Lapid
Get Even More From Bustle — Sign Up For The Newsletter
From hair trends to relationship advice, our daily newsletter has everything you need to sound like a person who’s on TikTok, even if you aren’t.