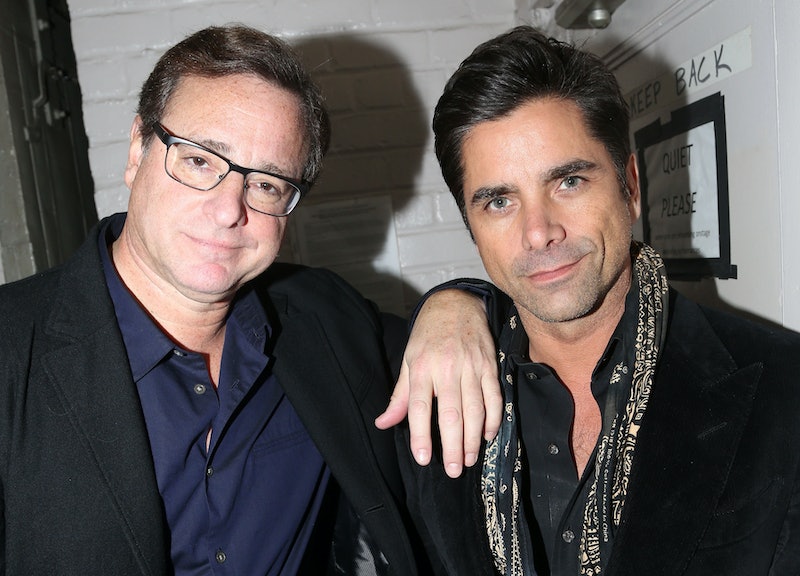 Danny Tanner may have been devoted to cleanliness, but outside of the Full House set, Bob Saget was famous for his dirtier brand of humor. Following the beloved comedian’s death at age 65 on Jan. 9, his longtime co-star and close friend John Stamos noticed that he even managed to pull off a final gag — posthumously. In a Friday, Jan. 21 Instagram post, Stamos shared a screenshot from CNN’s on-air breaking coverage of his castmate’s tragic passing, including a photo of Saget in front of NBC’s Peacock logo — but most of the first three letters were obscured.

“Even in death, he found a way to get one last dick joke in!” Stamos captioned his Instagram post. “My guardian angel with the dirtiest mouth and a heart as big and benevolent as forever.” Among the celebrity commenters were Andy Cohen, as well as Fuller House co-stars Dashiell and Fox Messitt (whose mom manages their account) and Jodie Sweetin, who wrote, “He’s SO proud of that one,” adding three tears of joy emojis.

The same day, Stamos published his full eulogy from the late comedian’s Jan. 14 funeral service in the Los Angeles Times, again referring to his friend of 35 years as his new “guardian angel with the dirtiest mouth and a heart as big and benevolent as forever.”

The actor also struck a more serious tone between adult-themed quips in his emotional tribute to Saget, who was found dead in a hotel room in Orlando, Florida, amid his standup comedy tour. “I’m not ready to accept that he’s gone. I’m not going to say goodbye yet,” began Stamos, who also served as a pallbearer alongside Dave Coulier and John Mayer, among others. “I’ve spent days refusing to let him go. But now I’m starting to realize I don’t have to. I don’t have to say goodbye because he’s never leaving my heart. And I will continue to talk to him every day and let him know what he means to me. Bob, I will never, ever have another friend like you.”

In addition to his several other Instagram tributes, Stamos joined Sweetin, Coulier, and fellow Full House stars Candace Cameron Bure, Lori Loughlin, Andrea Barber, and Scott Weinger, as well as Mary-Kate and Ashley Olsen in a cast statement. “Thirty-five years ago, we came together as a TV family, but we became a real family. And now we grieve as a family. Bob made us laugh until we cried,” the Jan. 10 message read. “Now our tears flow in sadness, but also with gratitude for all the beautiful memories of our sweet, kind, hilarious, cherished Bob. He was a brother to us guys, a father to us girls and a friend to all of us. Bob, we love you dearly. We ask in Bob’s honor, hug the people you love. No one gave better hugs than Bob.”

More like this
Ashton Kutcher Wants Danny Masterson “To Be Found Innocent” In Rape Retrial
By Jake Viswanath
Hilary Duff's Husband Matthew Koma Has Her Name Tattooed On His Butt
By Jake Viswanath and Stephanie Downs
At 28, Debra Jo Rupp Was Living A Much Different '70s Show
By Grace Wehniainen
Raven-Symoné Addressed Fan Pushback To Her Name's Actual Pronunciation
By Stephanie Topacio Long
Get Even More From Bustle — Sign Up For The Newsletter
From hair trends to relationship advice, our daily newsletter has everything you need to sound like a person who’s on TikTok, even if you aren’t.