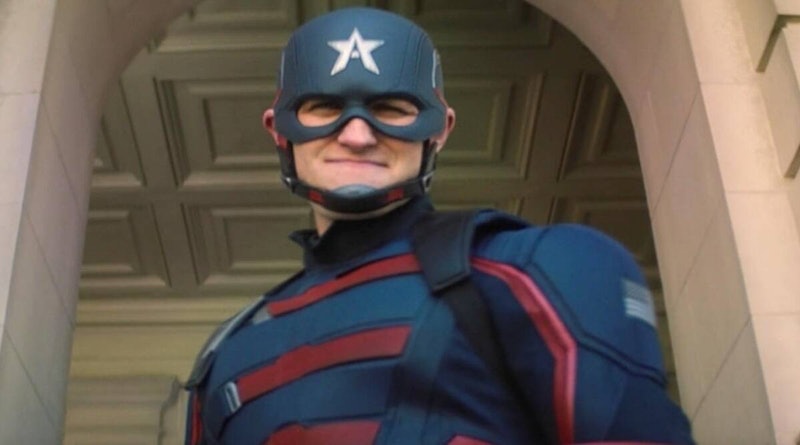 One of the topics Disney+’s new Marvel show The Falcon and The Winter Soldier grapples with is what it means to be American — especially when you’re a Black man like Sam Wilson. “The show is very forthright and very unapologetic about dealing with the truth of what it means to be American, Captain America, Black Captain America — and if that's even a thing," star Anthony Mackie, who plays Sam, told Entertainment Weekly in March.

When we last saw the original Captain America, Steve Rogers, he was retired and leaving his shield with Sam at the end of Avengers: Endgame. The show follows Steve’s friends Sam and Bucky (Sebastian Stan) as they grapple with not only carrying the shield, but if they even want to represent America in the same way Steve did. This plot puts them at odds with U.S. Agent, aka John Walker, a comic book character whose own extreme patriotism often made him clash with Steve. While Sam grapples with taking up his friend’s mantle, the U.S. government has no problem bypassing Steve’s wishes and electing John Walker as the new Captain America instead.

Walker is “a complicated character. That's what drew me to him," actor Wyatt Russell told Entertainment Weekly. He added that Falcon and The Winter Show is very much “a show about identity,” but what it means to be American means something very different “to each specific person.”

Based on his comic book history, Walker is likely meant to reflect the exact type of conservatism and nationalism that’s been on the rise in the last few years. "That character from the books, what he represents is extremely relevant,” head writer Malcolm Spellman told EW. He added that though they “shifted away” from some of the comic book storylines, Walker is still roughly “half” of who he is in the source material.

Per IGN, in the comics, Walker became the ominously named vigilante Super-Patriot after his brother was killed in action. He was later chosen to be Steve Rogers’ successor as the new Captain America, but he consistently failed to live up to Steve’s ideals — and often even publicly slandered the Captain America title. Notably, he was much more brutal than Steve, and his super strength combined with his uncontrollable anger made him a volatile teammate. He also had a really questionable sense of judgement, often times aligning with outright villains. For example, in Spectacular Spider-Man #138, Walker was sent on a mission to “aid democracy” in South America, but in reality he was helping the villain Tarantula hunt down and kill refugees escaping their oppressive regime. Walker later realized his error and defeated Tarantula, but the refugees had already become afraid of Walker. After a terrorist group killed Walker’s family in Captain America #347, he retaliated by killing most of its members. It’s around that time that Walker was deemed too dangerous to carry the shield, and the Captain America mantle was given back to Steve.

In the following years, Walker continued to work for various Avengers teams like the West Coast Avengers under the moniker U.S. Agent. As his anti-terrorism views hardened, he moved to work for a corporate-owned vigilante group. He then served under the U.S. Secretary of Defense’s team The Invaders, but that group also disbanded after it was discovered that their leader was the villain Red Skull.

Finally, after a major battle severed his left arm and leg, Walker retired from active duty and became warden of the super-villain prison the Raft. Notably, the Raft is where Sam, Wanda Maximoff, Clint Barton, and Scott Lang were taken by the U.S. government before Steve rescued them at the end of Captain America: Civil War.

It’s unclear what plans Marvel has for John Walker now that he officially took up the U.S. Agent identity in the Falcon and the Winter Soldier finale. But he clearly has a fraught history that reflects many of the issues happening in America today.