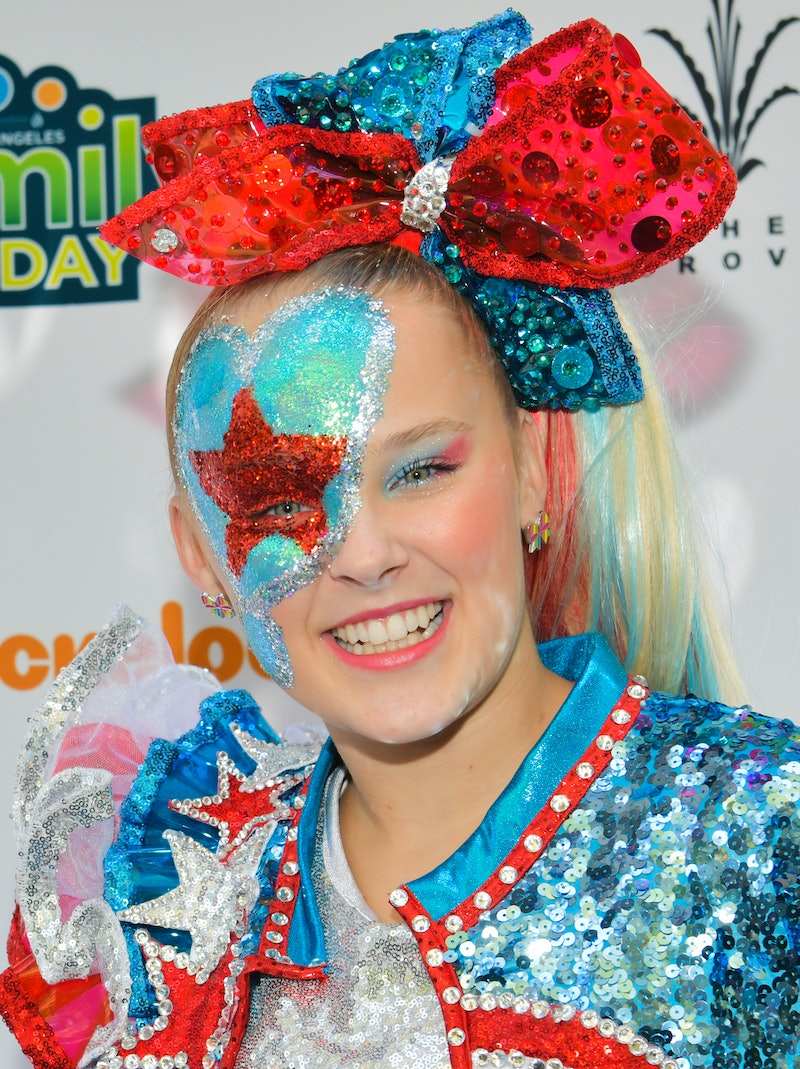 Dance Moms vet and YouTube star JoJo Siwa's "Best Gay Cousin Ever" T-shirt made a bold statement. After she shared a photo of herself wearing the top from her cousin via social media on Friday, Jan. 22, celebrity pals including Lil Nas X, Paris Hilton, Ellen DeGeneres, Bella Thorne, and Todrick Hall were among those publicly offering their support for her coming out as a member of the LGBTQ community. The outpouring of kind words led Siwa to post a video on Instagram on Saturday, Jan. 23, letting fans know that she has gotten "the most endless amount of love and support" and "it's been the best 48 hours."

"I'm so proud of you sis," Hilton wrote in an Instagram story that Siwa shared, while Thorne added, "Congrats little queen." On Twitter, rapper Lil Nas X, who came out as gay in 2019, replied to Siwa, joking, "if u spell "swag" backwards, it’s "gay". coincidence??," and DeGeneres sent a red heart emoji. For his part, Hall tweeted, "I have never been more proud in my life! Happy for you and happy for how you’re going to change the world. Children need to see this! Me = crying."

Siwa sparked speculation about her sexuality in recent days after sharing several LGBTQ-themed TikTok videos. She appeared in one post dancing with TikTok's Pride House members Kent Boyd, Mollee Gray, Garrett Clayton, and Jeka Jane to Paramore's "Ain't It Fun," which includes the line, "now you're one of us." Later, Siwa shared a video of herself proudly lip-syncing to Lady Gaga's "Born This Way," emphasizing the lyrics: "No matter gay, straight, or bi / Lesbian, transgendered life / I'm on the right track baby / I was born to survive." (The Nickelodeon star also posted a video to her Instagram stories performing to Gaga's 2011 hit, writing, "My favorite song as long as I can remember.")

Friends and fans pointed out the importance of a teen star like Siwa coming out. One Twitter user noted "the impact ... to millions of very very young kids and their parents" because of the "normalization this has," and then called Siwa "a queen." In replies, others pointed out that kids now "have someone like Jojo to look up to" and that "this is a step in the right direction" to a place where sexuality is not "something taboo to hide."

In her video Saturday, Siwa thanked everyone for their support and shared how happy it made her. She also revealed that she'd been asked to specifically label herself, but she doesn't have an answer yet. "I want to share everything with the world, I really do," she said, "but I also want to keep things in my life private until they're ready to be public. ... What matters is that you guys know that no matter who you love, that it's OK."

In December, Siwa told Entertainment Tonight that she was "single as a Pringle," explaining that dating wasn't a priority in her life. She remains open to the possibilities, however. "My life is so figured out…My career is so like, 'Boom, this is what's happening,' and I just have to keep running forward on that track. And so for me, on the relationship side of things, it's more just like a fun thing," she said. "If it comes around, great. And if it doesn't come around, also great."

When it comes to what she's looking for in a potential partner, Siwa added, "In a couple words: Nice, cares about me, and is there for me through thick and thin…What's most important to me is just somebody who genuinely, really, truly cares about me."

If the reactions to her coming out are any indication, she'll clearly have plenty of support when she eventually meets that special someone.

This article was originally published on Jan. 23, 2021