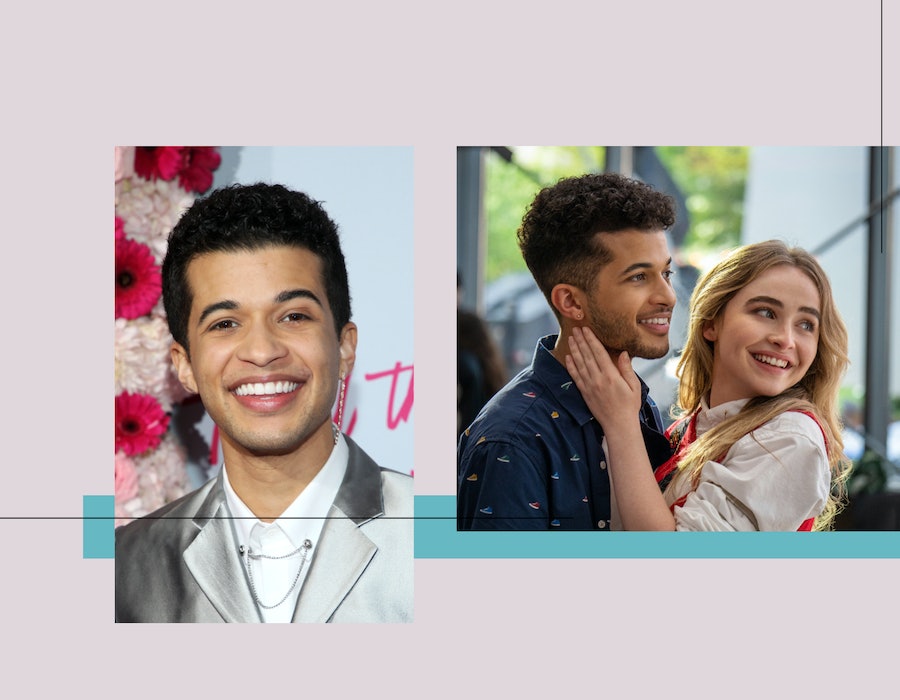 Jordan Fisher has been training his entire life to be the lead in a dance movie. The professional dancer spent his childhood memorizing dance movie choreography — that ofYou Got Served, specifically — and honing his craft. Now that he's starring in Netflix's Work It, Fisher's making his dreams of being the next Channing Tatum come true. Work It is in many ways an homage to dance movies of the early 2000s like Step Up Stomp The Yard, and Honey — all movies Fisher tells Bustle are the ones "that really got me excited about dance." And though the To All The Boys 2 star has showed off his moves in music-driven projects like Teen Beach Musical andGrease Live and in Broadway's Hamilton and Dear Evan Hansen, Fisher is finally ready to stake his claim as the new dance movie king.

In Work It, Fisher plays Jake Taylor, a former champion dancer and choreographer who ends up teaching wannabe dancer Quinn (Sabrina Carpenter) and helping her gather a group of amateur dancers for a competition. It's your typical dance movie romance in which the experienced dancer (Fisher) teaches the novice (Carpenter) how to dance, an activity that conveniently requires him to lightly touch her hips and whisper in her ears to do things like "let your body drive you." (It's corny, yes, but when Fisher says it in his low, soft tone, he does it with the conviction of a rom-com hero.) It's flirting, foreplay, and dancing all in one, and it all leads up to the seduction dance. You know, the one where the music is just too good and the physical chemistry is too much to contain.

It's in Work It 's “seduction dance,” that Fisher most deftly balances his fancy footwork with his leading man prowess. The moment comes after Quinn and Jake make their dance partnership official — and just so happen to find themselves in an empty park, under an abandoned overpass. Jake freestyle dances with Quinn to show her how to really let her body drive her. "The mantra of putting that sequence together was, 'What do you feel is the next sequence? What do you feel is the next move? Where is your body driving into this next thing?,'" Fisher says of the creative freedom he and Carpenter had while filming the scene.

For as effortless as Fisher appears in the role, it's the result of a lifetime of hard work. It’s easy enough to listen to your body when you’re dancing alone, but when you have another person to navigate in an effortless-looking freestyle, it can get pretty tricky. That’s where Fisher’s background as a former winner of Dancing With The Stars comes in handy. "I'm really grateful for my time that I spent on [the show]. My partner Lindsey [Stirling] really taught me a lot in terms of partnership and engaging magnetism," he explains. "There's a push-pull thing that happens between partners that I hadn't really explored [before]." It also helped that he's known Carpenter since 2013. "I think dance is one of the quickest ways to build trust with somebody, and Sabrina and I already had that because we had a foundation of friendship."

It also helps that Fisher and the rest of the cast actually did their own dancing, making the seduction dance just that much hotter. But it's more than just his talent that makes Fisher the perfect performer to pick up where former dance movie titans like Tatum left off. Fisher makes moves with the charm and ease of a romantic leading man, a rare but vital skill for these types of films. And if Work It ushers in the next wave of dance movies, it's clear that Fisher is on his way to becoming the genre's next icon.