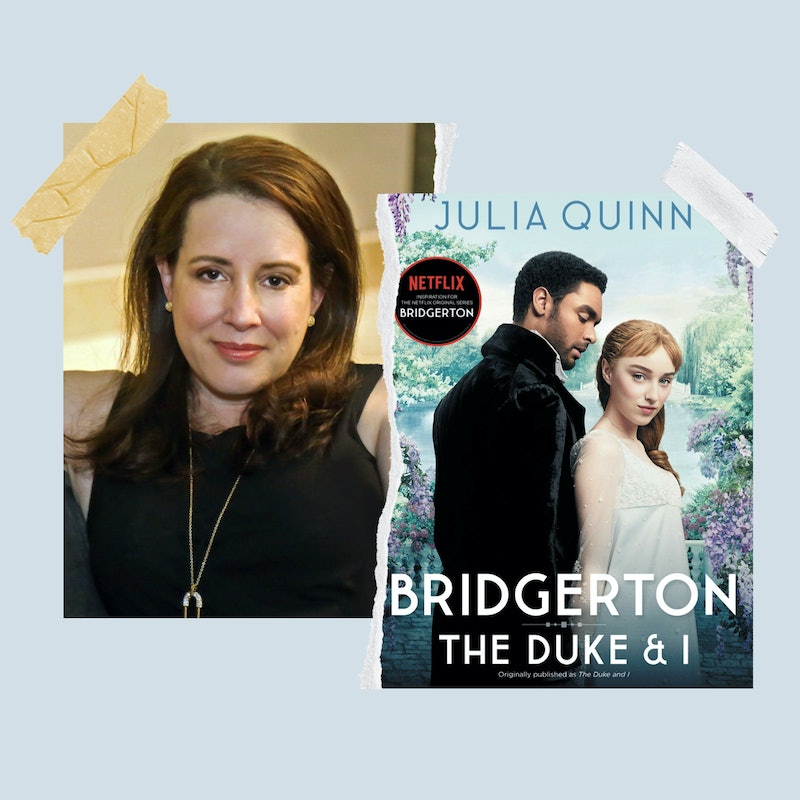 Julia Quinn has had quite a year. Well, quite a career. The Seattle-based author is the force behind the bestselling Bridgerton series, which some people may know better from its hit Netflix adaptation — a pastel-filled romp starring Regé-Jean Page as a spoon-licking, eyebrow-raising thirst trap of a Duke.

But long before the Shondaland-produced show was viewed by over 82 million households, the Bridgerton novels were already beloved by romance readers, who’d been following Quinn’s Regency-era story since the first book, The Duke and I, was published in 2000. Still, even Quinn couldn’t have predicted the fervor over the show. “I was confident my readers were really going to like it, and I thought that there were probably a lot of people who were hungry for this type of thing who were really gonna like it. I did not think it was going to do this,” she tells Bustle of the show’s wild success.

Luckily for Quinn’s millions of fans old and new, Bridgerton is here to stay. The author’s books continue to dominate bestseller lists 20 years after publication, and Netflix has already committed to producing four seasons of the show (Season 2 is currently filming). And for all of the hardcore Quinn readers, a Miss Butterworth and the Mad Baron graphic novel — which, if you know, you know — is also on the way.

Below, Quinn discusses what comes next after your books become an acclaimed and long-running TV show.

How did the Bridgerton series come about?

Yes, all too well.

I was starting the book and I had all this information I had to get across and I couldn't figure out how to put all this in there without it being a really awkward info dump. And then somehow it came to me that if I had a gossip columnist, it was her literal job to dump info. And it was sort of this cross-section of lazy and incredibly clever. I was just like, this is awesome. And so it just sort of came out of me, this snarky kind of little arch tone. And I was like, "Oh my gosh, I just put all the information there on page one."

And then once I did that, it seemed obvious that Daphne and Violet would be talking about it and they started wondering who it was. And then I realized, "Oh, maybe it can be a mystery. Ooh!"

There have been a lot of conversations about some parts of The Duke and I and how the adaptation has handled them. You wrote this book 20-plus years ago. Looking back at the series as a whole, are there things you wish you did differently?

Well for one thing, I don't really go back and reread my books. So, I mean, in some ways that's kind of a bit of the easy way out. I don't read them, so it helps me let them stand where they are. I feel like, especially with The Duke and I, that starts getting to a really complicated question. I think we both know what we're talking about here [when Daphne prevents the Duke from pulling out]. The most interesting thing to me about this whole question is how reaction to the book has changed over time, specifically the big moment with Daphne in bed, and what is really interesting is that when the book came out, there wasn't a peep from anyone saying that they thought anything was unacceptable. And if anything, it was a reaction of, "You go, girl!"

I think that the change in reaction over time is due to two things. The obvious one of those two things is our heightened or better understanding of consent, which is a very good thing. I want to unequivocally say that. But what I think is actually possibly more at play, which people don't necessarily pinpoint, is that as we move forward and women start to close the power gap and gain more agency — and I want to also make it clear, we're not where we should be, but we have moved a lot. But as we move forward towards where we should be, it becomes more and more difficult for modern women to truly identify with Daphne's lack of power and agency within her society and her marriage.

As someone who's been a romance reader for a long time, it's fascinating seeing that there's a lot of new interest in the genre and particularly in historicals. What do you wish that more people who are being introduced to this genre knew about?

Just how talented so many of the writers are. Do you know who Nancy Pearl is?

Okay. That's great. I don't have to explain. She's amazing. She has this great quote where she said that literary fiction is always judged by the best examples and romance is always judged by the worst. It's absolutely true. Although I probably shouldn't say that after I just got pulled up by Slate. I'm sure you've seen the Slate thing.

What's interesting about that is it didn't bug me personally. Maybe it's because I am now in a position where I'm kind of Teflon-coated to a certain degree. It angered me on behalf of the genre. Me personally, I was like, whatever. But I think in general that often when people are wanting to write about romance or want to learn about it, they purposely go out to try to find whatever seems the most ridiculous thing they can. And of course you can find a ridiculous romance novel; you can find ridiculous anything. So I just wish people realized how many incredibly talented writers there are in the genre. Go in with high expectations; [you] should, because we have a lot of great stuff.

Oh my gosh. I can't pick people. I mean, that's like picking your favorite kid. I can tell you who was the most like me? So I have long said that I'm a combination of Penelope, Eloise, and Francesca. And in fact, my sister called me Francesca yesterday and not necessarily nicely. I was trying to get off the phone with her and she's like, "Okay, Francesca." Wow. I share that feeling of sometimes just needing to put my family aside and be like, I'm over here.

Favorite love interests...I can't pick. In some ways, when people talk about favorite characters, I go Violet. I think that's in large part because she appears in the most books, so I got to know her the best. I do love Violet an awful lot, and I love how over the books she really developed as a character. Like in The Duke and I, she's still kind of stereotypically a Regency mom. And then as I kept going through the books, she just really turned into someone entirely three-dimensional and wonderful. And some of my favorite scenes that I've ever written have been with her. There's a scene where she talks with Francesca about widowhood. There's one where she talks with Hyacinth about how Hyacinth basically saved her and pulled her out of depression and she's great. I love Violet.

I love that you mentioned Francesca because I feel like she is an underrated character and that her book, When He Was Wicked, is underrated. I love her and Michael, and I can still to this day remember the last line of the book: “thank you for letting him love her first.”

Confession time: My sister thought of that line! That was a very different book for me. And I don't know that I would call it underrated. It's kind of like either at the top of people's lists or the bottom. But I was very proud of that one because it was different. And to have that sort of structure in the romance novel where the first four chapters she's still married to someone else was, at the time, considered very risky. My publishing house was nervous about it, and I really kind of fought for it. I was like, no, I feel like we really need this, and if we don't have this, the fact that they feel so guilty is just going to be told and not shown. So that one I was really proud of.

Yes, especially because I think love-after-loss books can go either way, if the loss is not handled delicately.

What's next for you in terms of writing projects, in addition to the Miss Butterworth and the Mad Baron graphic novel?

I really have ended up taking a lot more time off from writing during the pandemic than perhaps I should. My fatal flaw to begin with is that I end up taking up too much time off between projects anyway. It's always been a problem for me. But with the pandemic, it's funny, some people I've talked to have been incredibly productive, like Susan Elizabeth Phillips. So she's just like, "I am getting so much done!" And yeah, I'm not. I think part of it is because I have been very busy with stuff relating to the show, but part of it also has been that my husband is an infectious disease specialist.

We live in Seattle, where we had the very first [COVID] death, but it felt like we were at ground zero really early on and he was just exhausted in every possible way. And you know, the lives of my children were so disrupted and I feel like I just turned really into more family caretaking mode this year. And I recognize how fortunate I am that I was able to. So I don't know what I'm going to do next. I probably need to find out soon.

More like this
Ozzie’s Coming Out Scene With Kitty On 'That ’90s Show' Has Twitter Sobbing
By Brad Witter
All The ’70s Easter Eggs You Missed In 'That ’90s Show'
By Grace Wehniainen
'The Crown' Season 6 Has Suspended Filming "Out Of Respect" For The Queen's Death
By Bustle Staff
Here’s Everything Coming To & Leaving Netflix In February
By Jake Viswanath
Get Even More From Bustle — Sign Up For The Newsletter
From hair trends to relationship advice, our daily newsletter has everything you need to sound like a person who’s on TikTok, even if you aren’t.