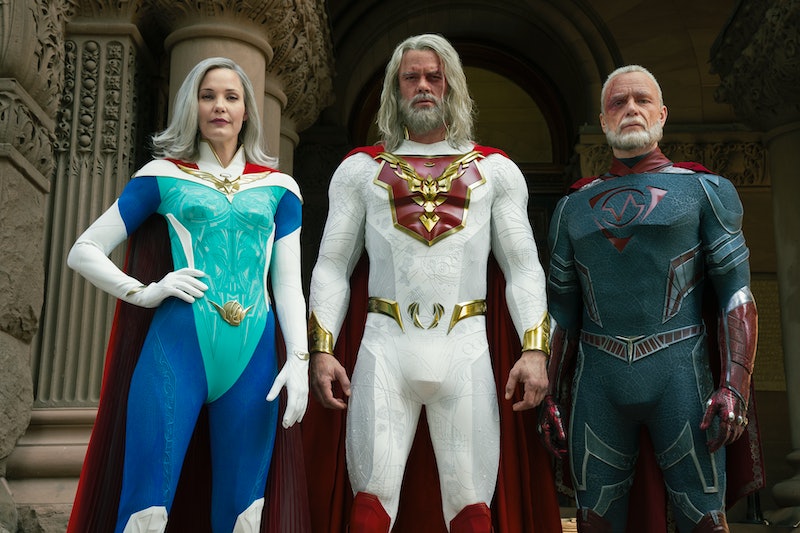 Update: Jupiter’s Legacy has been canceled after one season. In a Twitter statement on June 2, comics creator Mark Millar announced that they’d “made the tough call of letting our incredible cast out of their show commitment.” However, Millar also revealed that he’s working on another Netflix show: Supercrooks, a live-action series that will follow a group of villains planning a monumental heist, per The Hollywood Reporter. He also wrote that he’s “confident” they’ll return to the world of Jupiter’s Legacy later and “just want to say thanks to you guys for your continued support and to the cast and crew who made this look great.”

Earlier: All good superhero franchises know how to end with a cliffhanger to keep fans wanting more. That’s what Netflix’s new series Jupiter’s Legacy does — only it’s not a franchise quite yet. Mark Millar, who wrote the comic of the same name that the series is based on, told Deadline that Jupiter’s Legacy hasn’t yet been renewed for Season 2, but he encouraged fans to tune into the series and then tell Netflix that they want more. “Season 2 is up to the audience. We don’t want to get too cocky. All I see is we’re going into this incredibly bullish. We feel great about it,” he said. “So, fingers crossed people love it as much as we do.”

If Netflix does renew the show, there’s plenty of source material for the writing staff to draw from. According to SyFy, there are five issues of Jupiter’s Legacy — plus a prequel called Jupiter’s Circle — that explore how Earth’s first superheroes came to be. And having written so much material for these characters, Millar was thrilled that Netflix agreed to make Jupiter’s Legacy a TV series as opposed to a film. “Netflix afforded us the chance to make this adaptation as big and deep as it needed to be ... fully realized into a series that wouldn’t need to be condensed into a three-act film,” he wrote in a blog post.

Millar, who’s also credited as an executive producer, told Deadline that he’s looking forward to the chance to further expand the Jupiter’s Legacy world, although he doesn’t yet know if he’ll want it to be shorter or longer than the material he’s already written for the comics. “What’s wonderful about TV shows, we can go so deep and flesh out so much more with meat on the backbone,” he said. “Characters can have a few pages that can take up an hour’s television time and I love that.”

Here’s what we know about a potential second season of Jupiter’s Legacy.

Netflix series tend to air a year apart. Especially if the green light hasn’t been given yet for Season 2, it’s hard to imagine it returning any sooner than May 2022.

The cast members who stick around at the end of Season 1 are likely to return in Season 2, with perhaps the return of George/Skyfox if Hutch can track down his dad in the modern timeline. Fans are also curious to see if Richard Conrad/Blue Bolt will appear in the current timeline, as we’ve only seen him in the past.

But the cast that starts Season 2 won’t necessarily end it. As Season 1, Episode 1 showed, this series is not afraid to kill its heroes, and many faces we met died in battle shortly after.

There’s no trailer as of yet, since the show hasn’t been renewed. Watch this space.

Whether or not Jupiter’s Legacy comes back for more, Millar’s world of comics is here to stay. According to his website, Netflix bought the rights to 17 of his properties in 2017, and many projects are already in the works, including adaptations of his comics The Magic Order, Sharkey The Bounty Hunter, and Space Bandits.